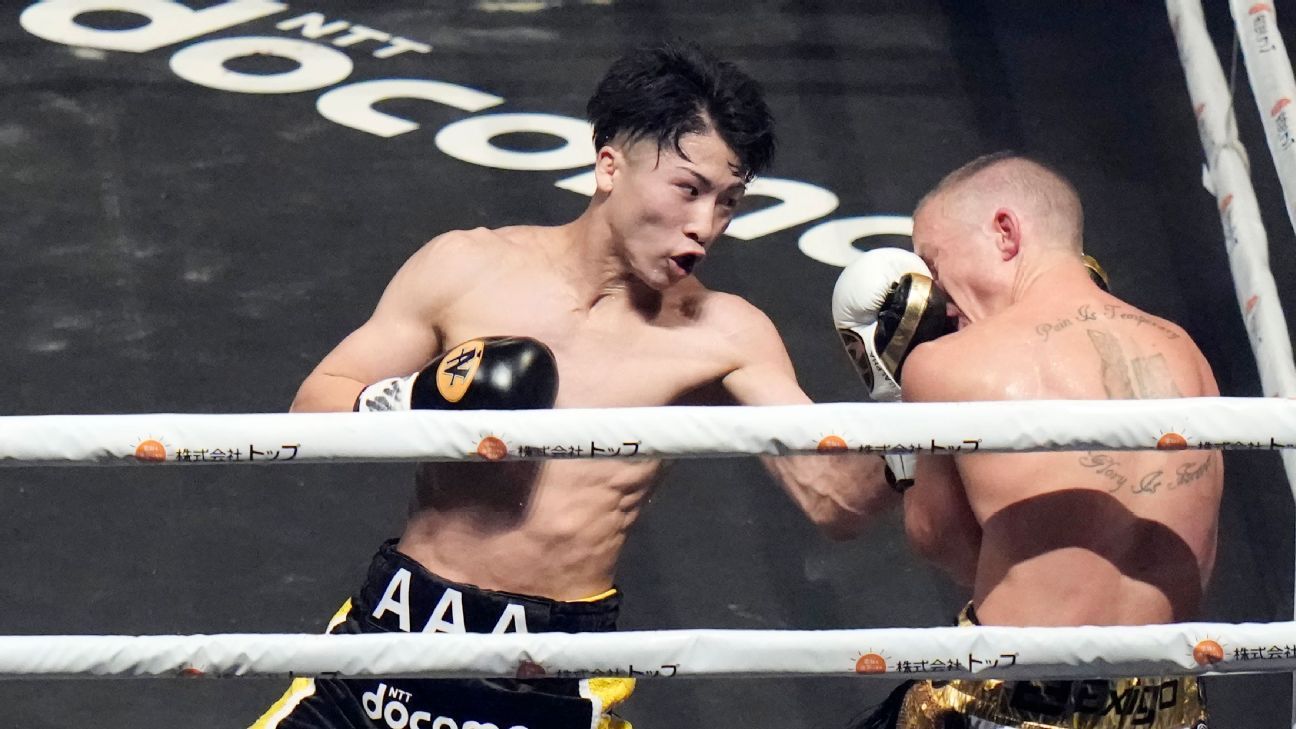 Naoya Inoue, ESPN’s No. 2 pound-for-pound boxer, has proved peerless through 24 fights as he cruised to another inside-the-distance victory on Tuesday in Tokyo.

Paul Butler was no match. He really wasn’t ever expected to be. The Englishman was simply there to hand over his WBO belt to Inoue, who won the undisputed bantamweight championship with an 11th-round KO. (Watch this fight on ESPN+.) Butler tried to just make it through the bout, so Inoue had to work extra hard to find openings. Finally, “The Monster” did so with a right hand to the body followed by a crisp left hook that rocked Butler before a volley of unanswered punches floored him in the penultimate round.

Inoue, 29, entered the bout as WBC, WBA and IBF champ and was a 60-1 favorite to add a fourth 118-pound belt. With his goal achieved, he’ll now campaign at 122 pounds. Much like Vasiliy Lomachenko before him, Inoue (24-0, 21 KOs) is so great that he needs to face far bigger fighters to be tested.

Fortunately, 122 pounds features a pair of unified champions in Stephen Fulton and Murodjon Akhmadaliev, two boxers I recently ranked in the top 20 of the best 100 men’s fighters in the world (Inoue topped the list).

Fulton, in particular, would present a fascinating challenge for Inoue. The 28-year-old from Philadelphia often throws upward of 1,000 punches a fight, but can also box off the back foot. If anyone can contend with Inoue, it appears to be Fulton.

“I don’t think it’s far-fetched; I believe it’s realistic if [Inoue] comes up in time [before I move to 126 pounds],” Fulton told ESPN in June. “I don’t shy away from big fights. A lot of people want to see [me vs. Inoue].”

However, the WBC recently ordered a rematch between Fulton and Brandon Figueroa at 126 pounds, so it’s possible Fulton will campaign at featherweight going forward. If Fulton indeed moves up, his WBC and WBO titles will become available, so Inoue could fight for one of the two vacant belts.

If Fulton is unavailable, the most viable matchup for Inoue instantly becomes Akhmadaliev, who holds the IBF and WBA titles at 122 pounds. The 2016 Olympic bronze medalist from Uzbekistan won the unified championship from Daniel Roman in 2020 and subsequently made three defenses. The 28-year-old southpaw is fundamentally sound and packs enough power to keep opponents honest, but he’s never met an opponent remotely like Inoue. No one has, of course.

Luis Nery and Azat Hovhannisyan are the top two fighters in the WBC’s 122-pound rankings, legitimate contenders Inoue would be heavily favored to defeat. Ra’eese Aleem and Nery sit atop the WBO rankings. Matchups with any of the trio would be intriguing, but Hovhannisyan stands above the rest for his frenetic, nonstop-pressure style.

If Inoue can carry his vaunted power to another weight class — and I believe he can — he should be able to clean out 122 pounds, too. And why stop there? Inoue will likely go on to win titles at 126 pounds, as well.

It’s hard to find a serious flaw in his game. He boasts an active power jab, delivers an array of punches from varying angles and speed, and is considered perhaps the best combination puncher in the game. Now, Inoue needs an opponent worthy of sharing the ring with him, someone he could find at 122 pounds.