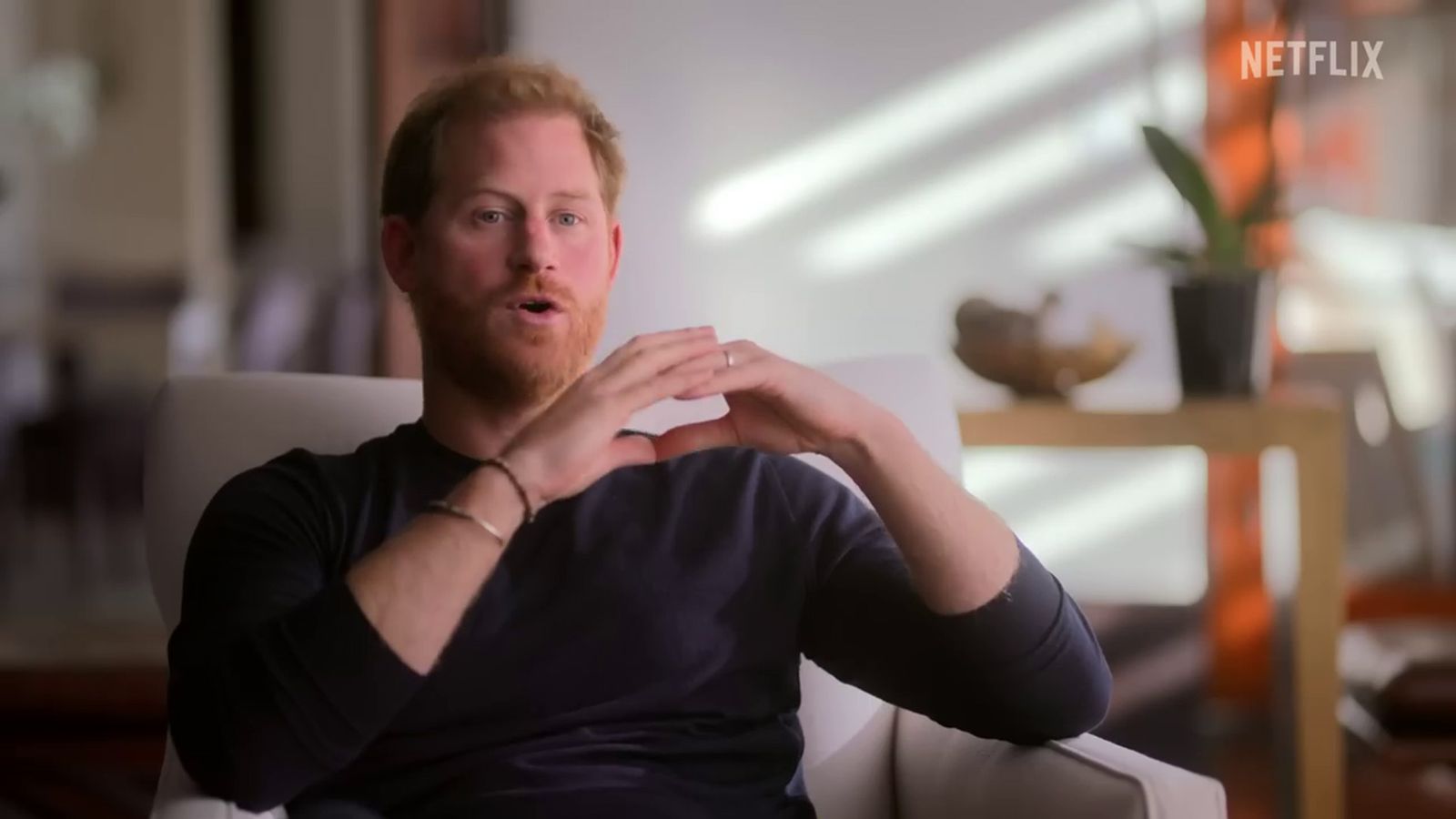 Prince Harry has said “they were happy to lie to protect my brother”, with Meghan saying she was “fed to the wolves” before she left the UK with her husband – in a trailer for the latest part of their Netflix docuseries.

Meghan says “our security was being pulled” and “everyone in the world knew where we were” in the footage.

“I said, ‘we need to get out of here’,” says Prince Harry, as the footage cuts to an aircraft taking off.

Prince Harry is then seen in a self-shot video on board the couple’s flight to the US, saying: “We are on the freedom flight”.

Last week the first three episodes of Meghan & Harry were made available to stream, with the pair talking about the pressure they felt from media interest in their lives.

The final three episodes of the six-part series will be released on Thursday, and are set to explore their decision to step away from royal duties and make a life in America.

“I wonder what would have happened to us, had we not got out when we did,” says the Duke of Sussex at the beginning of the 90-second clip.

He then speaks of “institutional gaslighting”, before the duchess adds: “I wasn’t being thrown to the wolves. I was being fed to the wolves.”

“They were happy to lie to protect my brother,” continues Harry, referring to Prince William, against images of Buckingham Palace and newspaper headlines including: ‘Queen orders a hard Megxit’.

“They were never willing to tell the truth to protect us.”

It is unclear who the duke is referring to as “they”.

On 8 January 2020, the Sussexes revealed they intended to “step back as ‘senior’ members of the Royal Family and work to become financially independent”.

They officially left the monarchy on 31 March 2020, having opted for personal and financial freedom over remaining as working members of the Royal Family.

“In order for us to be able to move to the next chapter, you’ve got to finish the first chapter,” says Harry.

Leaving the UK “gave us the chance to create that home that we had always wanted”, says Meghan.

“I’ve always felt as though this was a fight worth fighting for,” adds the duke.

The pair has defended the decision to give the streaming giant an intimate look into their private lives – with the show including personal clips and stills from their time as royals.

The couple signed lucrative deals, thought to be worth more than £100m, with Netflix and Spotify, after quitting as senior working royals following family rifts and struggles with royal life.

After their bombshell interview with Oprah Winfrey in 2021, this docuseries, directed by Oscar-nominated Liz Garbus, has been billed as a Netflix global event, with Harry and Meghan sharing “the other side of their high-profile love story”.

However, they have faced criticism, with one Conservative MP planning to bring forward legislation that could see the pair stripped of their royal titles.

Flybe collapses and cancels all flights, with hundreds of jobs lost
Here’s why Texas is a geothermal energy ‘sleeping giant’
Speakers call for overhaul of All-Party Parliamentary Groups
British nationals killed ‘attempting humanitarian evacuation from Soledar’, family statement says
Sunak’s integrity is taking a hit as he prolongs the pain over Zahawi – who will have to go