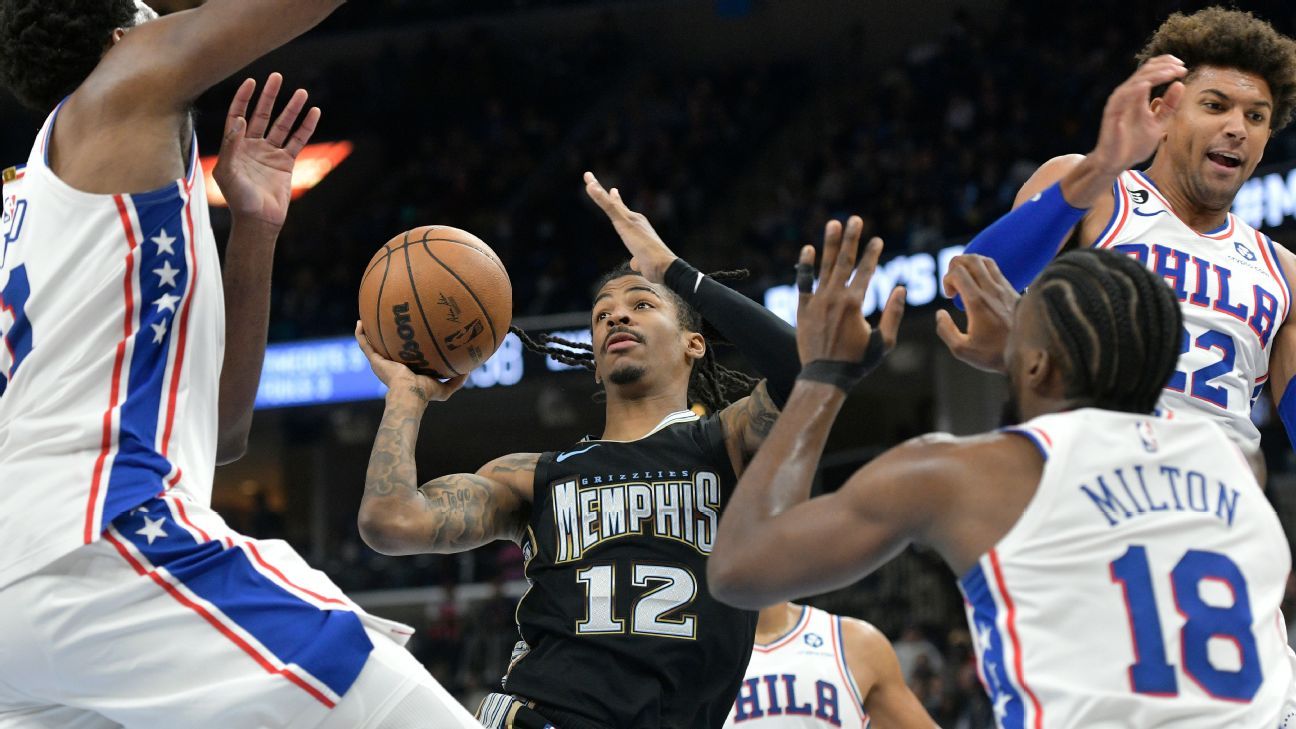 HOW DOES A 6-foot-2 point guard whose self-described weight is “175 soaking wet” rank right up there with the NBA’s best big men in paint scoring?

“Because motherf—ers can’t stay in front of me,” Ja Morant told ESPN aftering pondering the question for about as long as it takes him to get from the 3-point line to the rim with a clear lane.

Morant laughs, but there is truth to his jest. The Memphis Grizzlies‘ 23-year-old superstar became the first guard to lead the league in points in the paint in at least 25 years last season, doing so with a repertoire of moves to get around, under and sometimes over even the tallest defenders in the league.

Morant’s blink-and-he’s-gone burst, ability to change directions at full speed and ballhandling skills are certainly significant factors in his interior scoring dominance. So are the bunny-like hops that allow him to occasionally dunk on 7-footers in traffic.

But it’s too simple to point only at the spectacular as an explanation for how one of the league’s smallest players routinely dominates where size and strength typically reign supreme.

Consider one early November game, where on four separate plays, Morant displays the combination of explosiveness, finesse, feel and film study that makes him such a unique force in the paint.

“People look at that athletic stuff, but that happens once a game or once every two games,” Grizzlies shooting guard Desmond Bane said of Morant’s highlight-reel dunks and ahead of the team’s game against the Atlanta Hawks on Monday (8 p.m. ET on NBA TV).

IN THE OPENING minute of the Grizzlies’ Nov. 11 home win against the Minnesota Timberwolves, Morant goes to work.

He uses a screen from bruising center Steven Adams — the NBA’s version of a run-blocking right tackle — near the left sideline about 30 feet from the basket. Anthony Edwards can’t work around it, giving Morant the opportunity to isolate against Rudy Gobert with a runway in front of him.

Morant stays in first gear as he dribbles slowly down the middle of the floor, seemingly waiting for the right split second to accelerate. Gobert tries to remain an arm’s length from Morant, but is most concerned about protecting the rim, aware of potential backdoor cuts for lobs or layups as well as the threat of Morant attacking.

“Obviously, he’s very athletic and a very crafty finisher, but he can really pass,” Gobert said. “The lob, the pass to the shooters — as a defense, when the guy who’s got the ball in his hands most of the time can find the open man, that’s what separates the good from the great.”

As Morant crosses the free throw line, Gobert gives just a little too much cushion. Morant leaps off two feet in front of the dotted line — going up, up, up — and releases a right-handed floater just above the three-time Defensive Player of the Year’s outstretched arm. Swish.

“Getting to two feet, elevating and just a touch shot right over the front of the rim,” Bane said. “That’s his bread and butter. He’s jumping higher than you, and he’s got the touch. That’s tough. That’s tough.”

Defenses are usually fine with forcing contested floaters, which are typically low-efficiency shots. Not for Morant, who has made and attempted the third most floaters in the league this season, according to Second Spectrum tracking data.

Morant made 44.7% of his 215 floaters last season, according to NBA Advanced Stats, while leading the league with 16.6 paint points per game. He’s shooting 40.7% on 91 floaters this season while averaging 14.5 paint points, which ranks seventh in the league.

Get access to exclusive original series, premium articles from our NBA insiders, the full 30 for 30 library and more. Sign up now to unlock everything ESPN+ has to offer.

Those floaters frequently come late in the shot clock, when Morant has to create something and it’s the best available option. But there’s a benefit to taking floaters when he finds a comfortable pocket of space, such as the shot over Gobert.

“It allows me to not receive contact every time,” Morant said, “being able to have that floater right before I get to the big.”

MORANT PUMP-FAKES at the top of the 3-point arc and then crosses over between his legs, right to left, as he sizes up 6-foot-9 Timberwolves forward Jaden McDaniels.

Morant waves off a screen from Adams. He’s happy to go 1-on-1 against McDaniels. There’s a little more than four minutes left in the first quarter when Morant floors the gas pedal.

He drives left, the direction a second-row Wolves assistant coach keeps shouting to deny. The scouting report surely mentions Morant drives left 60.9% of the time, per Second Spectrum, sixth-most among 49 players with 200 or more drives this season.

Once Morant gets a step on McDaniels, as Adams said, “it’s a wrap.”

Adams walls over Karl-Anthony Towns in the paint to prevent any help from coming. But McDaniels, who averages 1.2 blocks per game, is still in decent position to challenge Morant from behind with his seven-inch height advantage.

Morant, however, goes with a goofy-foot lefty layup, leaping off his left foot instead of the right, getting the ball on the glass just a split-second quicker than McDaniels’ rising hand. It’s one of the wide variety of layups Morant works on to start every individual workout, and he’s equally comfortable with either hand, actually finishing at a higher clip (57.5%) with his left this season.

“I can’t just rely on dunking every single play, so I have to have different types of finishes to be able to get my shot off,” Morant said, “whether it’s high off the glass, same leg/same hand, reverse, hanging in the air forever.”

On another play midway through the second quarter, Morant catches the ball on the right wing and decides to run pick-and-roll with Adams. Edwards goes over the screen, allowing Morant to get in front of him. Morant stops, pinning Edwards on his back and essentially out of the play, dribbling in place as he surveys the floor.

Most Paint PPG (This Season)

Morant takes one dribble forward and launches into Towns, switches the ball from his right to left hand in midair and finishes over a 7-footer who flailed his arms but never got off the floor. And-1.

“He has the ability to manipulate the screens or the defensive coverages, so then he can get downhill where he obviously thrives,” Grizzlies coach Taylor Jenkins said.

“He’s got an unbelievable ability now to study what teams are doing to him and know ahead of time, ‘This is how I’m going to break it down.'”

THERE’S A LITTLE less than seven minutes remaining in the fourth quarter when Forbes switches onto Morant on the right wing, well past the 3-point arc. Forbes crowds him, and Morant breezily blows by him to the right.

Towns and McDaniels are back, both waiting in the paint for the small guard who made them look silly earlier in the game. No problem for Morant; it’s just time for a little trickery in the trees.

Morant jump-stops in the lane, just shy of the restricted area, and pump-fakes. As Towns and McDaniels leap in unison to challenge a shot that isn’t coming, Morant ducks under and lays the ball up and in while barely leaving his feet.

“Ja somehow finds a way to navigate through those cracks, whether it’s pivots or leaping over people or whatever the case may be,” Bane said. “He gets even skinnier in those cracks.”

Four minutes later, the Grizzlies are putting the finishing touches on the win as Adams sets another high screen for Morant. Edwards lackadaisically goes under the screen this time, and Morant zooms toward Towns, driving to his right down the middle of the floor.

Just before the free throw line, Morant suddenly and smoothly changes directions, putting the ball in his left hand. That forced the big man to flip his hips.

Once again, Towns is in trouble.

“When he attacks, he’s not off-balance and can always cut back,” said Adams, who faced Morant four times as an opponent. “Some people when they attack, once they go that way, it’s hard for them to cut back. He’s balanced all the time, so he always has the option of switching the angle, you know what I mean? That’s so difficult to guard.”

As Morant goes up for a lefty finish, Towns runs into him, drawing his sixth foul. The contact bumps Morant off-balance, with the 12 on the back of his jersey nearly parallel to the floor, but Morant somehow switches the ball to his right hand and puts it up softly on the glass. As Morant is sprawled out on the baseline, the ball rolls around the rim and goes in.

Another and-1 punctuates a typical Morant performance: 28 points, 16 in the paint, in a Memphis victory.

Morant sits up and flexes his wiry arms as the FedEx Forum crowd goes into a frenzy. His team of trainers frequently pound him with pads while Morant practices finishes during his offseason workouts, preparing for moments like this.

“He definitely has tons of moments where it catches you, but it doesn’t surprise you, because you expect that out of him,” Jenkins said. “He’s always got something up his sleeve.”