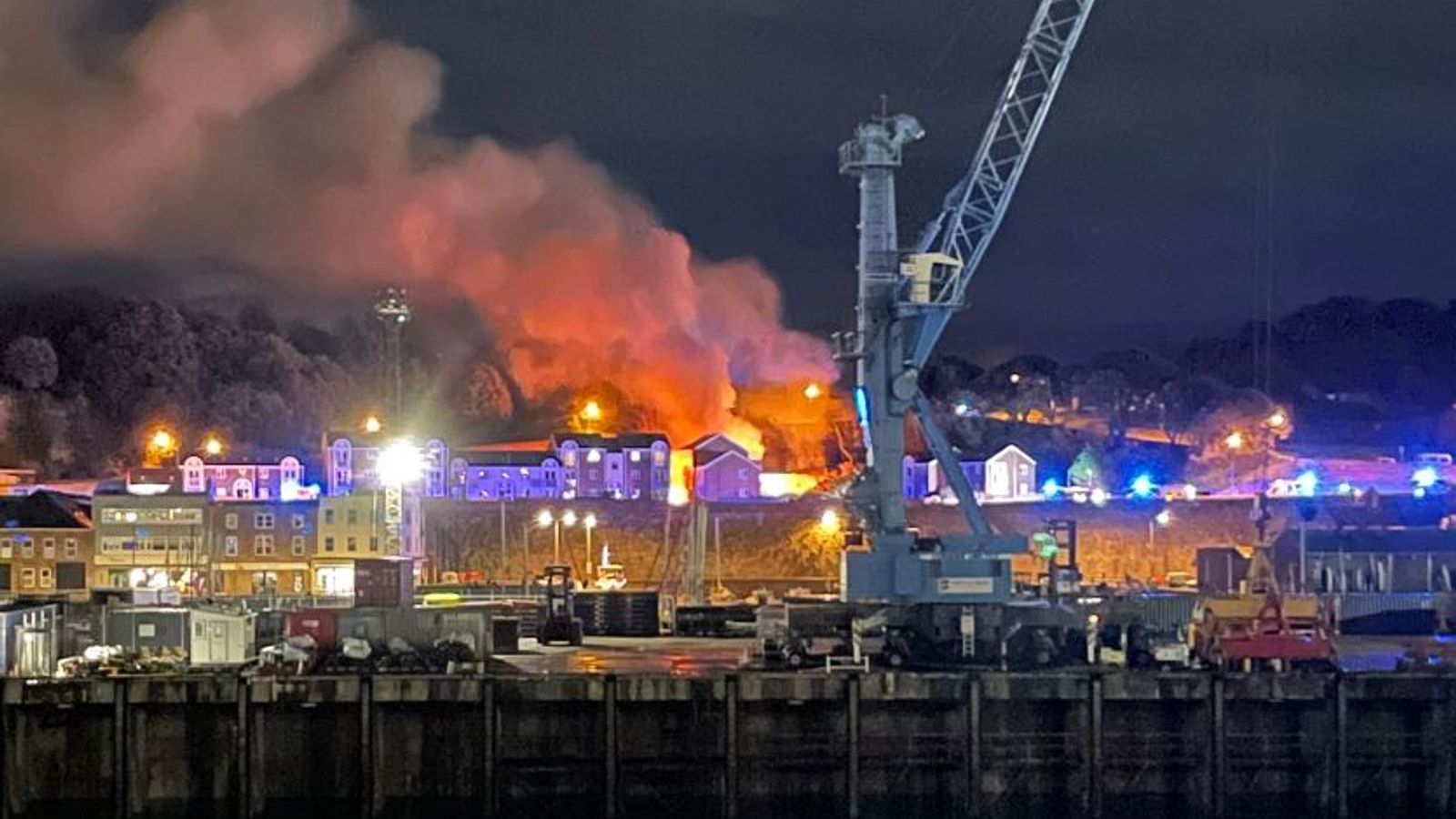 One person has died and “around a dozen” are missing after a large explosion at a three-storey block of flats in Jersey.

Two “walking wounded” have been taken to hospital as police on the Channel island search the site following the blast at Haut du Mont on Pier Road, St Helier.

Officers have said relatives are being contacted.

Police said the fire has been extinguished but emergency services are still “carrying out significant work” at the scene.

Robin Smith, chief officer at States of Jersey Police, said in a press conference the fire service had been called to the area the night before after residents reported smelling gas.

Mr Smith said police later received reports of a “large explosion” at around 4am on Saturday.

He said one person had died and two people, whom he described as “walking wounded”, were taken to hospital. He added that “around a dozen” people are still missing.

Mr Smith also described the scene as “devastating” and warned there could be more fatalities.

He said: “We have a three-storey building that has completely collapsed – described from a demolition point of view as a pancake that has dropped almost straight down.

“There is also damage to a nearby building as well, another block of flats that the fire service needs to make safe. It is a pretty devastating scene, I regret to say.”

When asked how many people were thought to be missing, he said: “Given the destruction of the building it is hard to properly assess the numbers.

“We are looking in the region of around a dozen, currently.

“That number could fluctuate, but that’s the number we’re operating to.”

When asked whether there are likely to be more deaths, Mr Smith said: “I wouldn’t want to speculate on those sorts of things… but there has to be a recognition that we could have more fatalities.”

He added police would investigate “whether or not there was a safety issue” regarding gas supplies.

Mr Smith also said between 20 and 30 people evacuated from the area had been taken to St Helier Town Hall.

Emergency services have told Jersey residents to avoid using A&E apart from in an emergency, and police have advised people to avoid the area of the blast.

Kristina Moore, the chief minister of Jersey, said the flats were run by Andium Homes who were working to ensure anyone who has been displaced has somewhere to stay on Saturday night.

She also paid tribute to the emergency services for their ongoing work at the scene, which she said would take “some days” to clear.

Speaking at a press conference on Saturday morning, Ms Moore said: “Through these difficult times, I think it’s reassuring for everyone to see what amazing strength we have within our emergency services and, again, we just thank everybody who stepped up and came to the rescue and continue to work on the scene.

“This is going to take some days and we will keep everyone updated and fully informed and we will do our very best to ensure everybody is properly looked after.”

Kanye West a ‘danger to my children’, David Baddiel says
Energy firms must halt forced fitting of prepayment meters, says Shapps
Met Police says two to three officers will face charges every week for months
‘Heart goes out to loved ones’ – 10 people killed in gun attack near Los Angeles
Patrick Mahomes and the most important quarterback battle in football history