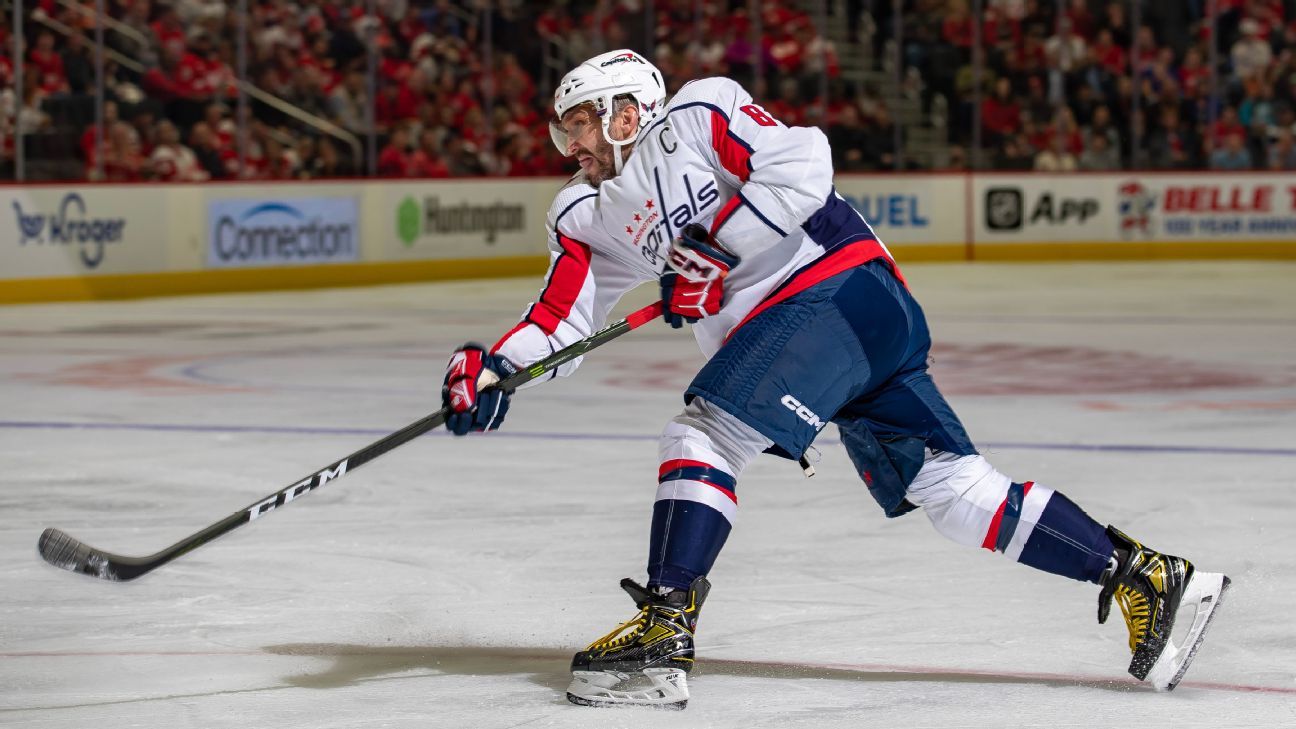 Washington Capitals star Alex Ovechkin is currently chasing down career NHL goal No. 800. After starting the 2022-23 season at 780, he has scored 16 goals thus far.

Ovi is third on the all-time NHL goals list, behind Wayne Gretzky (894) and Gordie Howe (801). The next highest active player on the list is Sidney Crosby, at No. 35 with 532 goals. With his 787th goal, Ovechkin set the record for most goals scored with the same franchise. With goal No. 793, he passed Gretzky for the most goals scored on the road for a career (403).

Follow along here as Ovi scores his way up the record books, including a schedule of upcoming games and highlight videos of goals No. 787 and beyond.

The NHL’s top 10 in career goals

At 19:56 of the third period against the Seattle Kraken, Ovechkin fired a shot into an empty net to put him four goals away from 800. The empty-net goal was assisted by Evgeny Kuznetsov and John Carlson.

With the Capitals up 2-1 against the Philadelphia Flyers, Ovechkin was on the ice to close out the game — and scored two empty-net goals! The first was assisted by Anthony Mantha and John Carlson, while the second was assisted by Evgeny Kuznetsov and Conor Sheary.

Ovechkin scored two goals in the first period of the Capitals’ matchup against the Vancouver Canucks — the first unassisted and the second with help from Dylan Strome and Anthony Mantha. Ovechkin has now passed Wayne Gretzky for most goals all time on the road.

A victory over the Calgary Flames was already well in hand, but Ovechkin’s goal at 12:24 of the third period — assisted by Conor Sheary and Sonny Milano — put him nine away from 800.

At 1:04 of overtime against the Philadelphia Flyers, Ovechkin notched a game-winning goal assisted by Dylan Strome and Erik Gustafsson.

A goal at 15:12 of the second period against the St. Louis Blues on Nov. 17 moved Ovechkin one step closer to 800. Dylan Strome was credited with the one assist on the tally.

Ovechkin scored at 14:36 of the second period in a 5-4 win over the Edmonton Oilers on Nov. 7, a power-play goal assisted by Erik Gustafsson and Evgeny Kuznetsov:

With his goal at 8:55 of the second period — a power-play tally assisted by Trevor van Riemsdyk and Anthony Mantha — Ovechkin broke Gordie Howe’s record for most goals scored by a player with a single franchise:

Note: All games not on ESPN, TNT or NHL Network are available via NHL Power Play, which is included in an ESPN+ subscription (local blackout restrictions apply).

This season will include 103 exclusive regular-season games across ESPN, ESPN+, Hulu and ABC. More than 1,000 out-of-market games will be available to ESPN+ subscribers via NHL Power Play on ESPN+.
• How to watch
• Subscribe to ESPN+
• Stream the NHL on ESPN