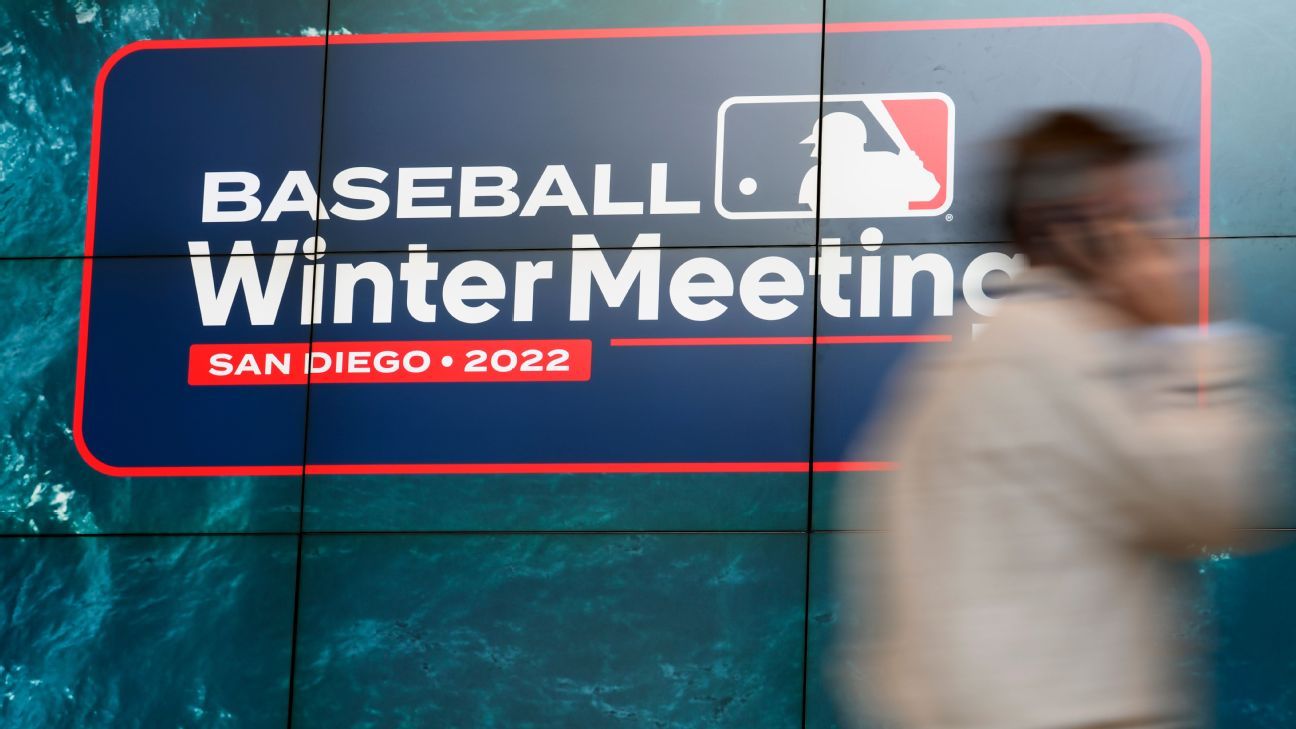 SAN DIEGO — The industry’s executives and agents filed out of the Manchester Grand Hyatt in clusters late Wednesday afternoon, leaving behind the madness of an event that had somehow exceeded lofty expectations of extravagance. Major League Baseball’s winter meetings, back for the first time in three years, had seen money flow and precedents buckle — but one final stunner remained. It came Wednesday night, while most of the sport’s movers and shakers sat inside airplanes bound for their respective home cities. The San Diego Padres, a midmarket team that already possessed enviable infield depth and a massive payroll, agreed on an 11-year, $280 million contract with Xander Bogaerts, one of the premier shortstops on the free agent market. A text message from a rival general manager said it all:

From the start of Monday to the end of Wednesday, 20 major league free agents agreed to contracts totaling nearly $1.6 billion. The vast majority did so while outshooting their projections. And if there was one phrase that could encapsulate the week’s event, it was that one — muttered so often by front-office members, agents, scouts, coaches and media members that it might as well have been part of the branding. The winter meetings, presented by Holy S—.

This offseason, signs of a spending spree had come early. One day after the World Series ended, the New York Mets brought back Edwin Diaz on a five-year, $102 million deal that stood as the richest ever for a reliever. Three days later, Robert Suarez and Rafael Montero — two non-closing relievers with minimal major league dominance in their track records — secured multiyear deals totaling $80.5 million from the Padres and the Houston Astros, respectively. Four days after Thanksgiving, Jose Abreu, who will be 36 next month, received three guaranteed years at an annual rate of nearly $20 million from the Astros. Jacob deGrom, a 34-year-old right-hander who accumulated 156⅓ innings the past two seasons, followed by garnering a five-year, $185 million contract from the Texas Rangers on Dec. 2 — a deal the industry’s executives were still stunned by when they arrived for the winter meetings a couple of nights later.

It was only an appetizer.

Justin Verlander, who will be 40 next season, got nearly $90 million guaranteed from the Mets while most people were still finishing their breakfast Monday morning. Trea Turner, a 29-year-old who relies heavily on his speed, obtained an 11-year contract worth $300 million from the Philadelphia Phillies shortly after. Willson Contreras, an offense-first catcher with clear limitations on defense, agreed on a five-year, $87 million deal with the St. Louis Cardinals. Taijuan Walker and Jameson Taillon, who combined for a 4.03 ERA these past two seasons, received a combined $140 million from the Phillies and the Chicago Cubs. Masataka Yoshida, a hit-for-average outfielder who stands 5-foot-8 and has played only in Japan, landed a five-year, $90 million deal from the Boston Red Sox, perplexing many of those who congregated in downtown San Diego earlier this week.

This was the winter meetings that saw Aaron Judge set a record for average annual value on a long-term deal, securing a nine-year, $360 million contract from a New York Yankees brass that offered about $150 million less just eight months earlier — and that one felt predictable by comparison. About 12 hours after Judge signed, Bogaerts became the fifth free agent to obtain a nine-figure contract this offseason. Twenty-one hours after that, Brandon Nimmo ($162 million from the Mets) became the sixth.

“I came into this prepared for teams to spend absurd amounts of money,” another GM said, “and somehow I’m stunned by how absurd it actually was.”

A couple of key factors were at play, according to industry sources. One was a new collective bargaining agreement, ratified near the middle of March, that provided certainty about the sport’s inner workings for the next half-decade. The other was Disney’s $900 million purchase of its remaining equity stake in MLB’s BAMTech product, which outfitted each of the 30 teams with an additional $30 million in a year that brought record revenues to the industry. Others also pointed to the 2022 Phillies, who grabbed the final spot in the postseason and made it all the way to the World Series, perhaps pushing midtier teams to turn up their aggression.

An assistant GM took note of something else: the remarkable lack of trades. For all the money thrown at free agents this offseason, there have been only 17 completed trades that involved at least one major league player, most of which have been relatively unimpactful. The homogeneity of baseball’s front offices, all of which are adept in analytics and use similar projection models, has made it increasingly difficult to gain clear advantages via trade, the executive noted. It has prompted teams to turn to the open market for most of their needs this offseason, creating the fierce competition that has blown the lid off free agency.

Need to know what to make of the moves that shape the offseason? We’ve got you covered.

No team has embodied it more so than the Padres, who seemed mostly set with their roster Sunday night and somehow became the talk of the ensuing winter meetings.

The Padres began the week with a payroll that was already projected to surpass $200 million and stood dangerously close to exceeding MLB’s luxury-tax threshold for a third consecutive year. (“Where are they getting all this money?” one agent asked.) Then they pursued Turner aggressively, made a late — and highly competitive — offer to Judge and blew past the Red Sox for Bogaerts, who will join a dynamic lineup featuring Juan Soto, Manny Machado, Jake Cronenworth and, eventually, Fernando Tatis Jr. Bogaerts is an imperfect fit, no doubt, but the Padres believe they have the roster versatility and the payroll flexibility to make it work.

Tatis, Cronenworth and Ha-Seong Kim, a Gold Glove-caliber shortstop, can all move around, but the entire roster is loaded with veteran players who would be coveted in the trade market because of both their track records and their relatively short paths to free agency. But those are concerns for another day. The Padres didn’t feel like they had time to wait.

“When we looked at the market, we knew it was going to be really aggressive,” Padres president of baseball operations A.J. Preller said Wednesday afternoon, about four hours before landing Bogaerts. “You can just tell. Everything’s like a moment in time.”

Four offseasons ago, when they pursued Bryce Harper and ultimately landed Machado, the Padres took advantage of a market for the sport’s most expensive free agents that had dried up, even though they were still at least a year away from contention. Now they have pivoted in a different way, seizing on the clear strength of the free agent shortstop class even though it creates redundancies in their position-player roster. To do so, they had to guarantee Bogaerts four to five more years than many expected. The market seemed to dictate as much.

“You look up and there’s few teams that are taking a step back,” Preller said. “Almost everybody is looking to advance forward. And that, along with some really quality players, is why it’s a very aggressive market.”

Early in the offseason, ESPN and MLB Trade Rumors predicted contracts for what each outlet identified as the 50 best free agents. Twenty of those players made it onto both lists and have chosen a team, and 14 of them have secured more guaranteed money than both sites suggested. Two shortstops heading into their age-30 seasons (Turner and Bogaerts) received 11-year contracts. A soon-to-be 31-year-old (Judge) surpassed $300 million. Two players in their mid-30s (deGrom and Abreu) combined for nearly $250 million. And a man who will pitch at age 40 next season (Verlander) secured up to $121.7 million by himself.

All told, 47 free agents have signed for $2.3 billion as of Friday morning, according to numbers maintained by Spotrac. That represents nearly a 17% increase from the average free agent spending of the five prior offseasons — and the offseason isn’t close to over.

After Carlos Correa, Dansby Swanson, Carlos Rodon and Kodai Senga come off the board, that total could reach the $3.2 billion figure obtained last offseason — with somewhere in the neighborhood of 100 other free agents still unaccounted for.