The Duke and Duchess of Sussex have defended their decision to make a six-part Netflix series looking at their private lives.

The first three of six episodes began streaming yesterday, in which Prince Harry and Meghan talked about the pressure they felt from media interest in their lives.

Now, their global press secretary Ashley Hansen has told the New York Times: “Their statement announcing their decision to step back [from royal duties] mentions nothing of privacy and reiterates their desire to continue their roles and public duties.

“Any suggestion otherwise speaks to a key point of this series. They are choosing to share their story, on their terms, and yet the tabloid media has created an entirely untrue narrative that permeates press coverage and public opinion.

“The facts are right in front of them.”

The three-part series, named “Harry and Meghan”, was released on Thursday and starts with a written statement, describing the show as a “first-hand account of Harry & Meghan’s story told with never before seen personal archive”.

In the second episode, the Duke of Sussex talks about paparazzi interest in their relationship and social media harassment, and refers to his mother, Diana.

“To see another woman in my life, that I love, go through this feeding frenzy, that’s hard,” he says. “It is basically the hunter versus the prey.” 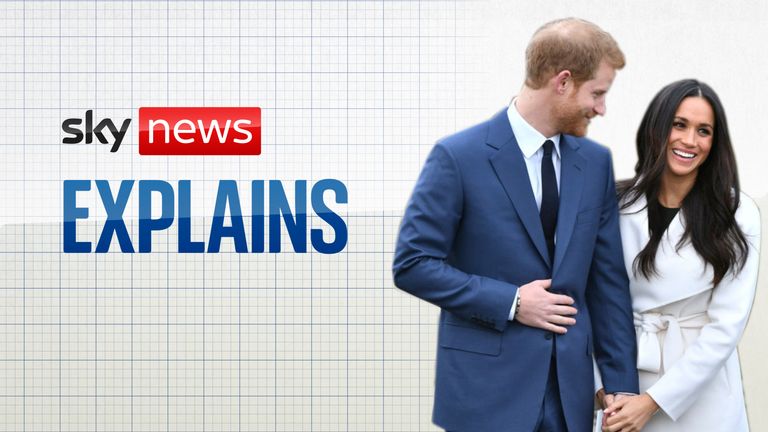 Royal correspondent Laura Bundock gives her reaction and explains what impact the docuseries will have on the couple.

Dating Meghan “became a combination of car chases, anti-surveillance driving and disguises, which isn’t a particularly healthy way to start a relationship but we always came at it with as much humour as possible”, he says.

“Whenever we saw each other we would give each other a massive hug and try and have as much of a normal life as possible.”

Meghan also describes paparazzi following her and how she received a death threat while she was in Toronto.

“I would say to the police, if any other woman in Toronto said to you I have six grown men who are sleeping in their cars around my house who follow me everywhere that I go and I feel scared, wouldn’t you say that it was stalking?

“And they said yes, but there’s really nothing we can do because of who you’re dating. I was like, so I’m just supposed to live like this? And then I got a death threat and things changed because I needed to have security.” 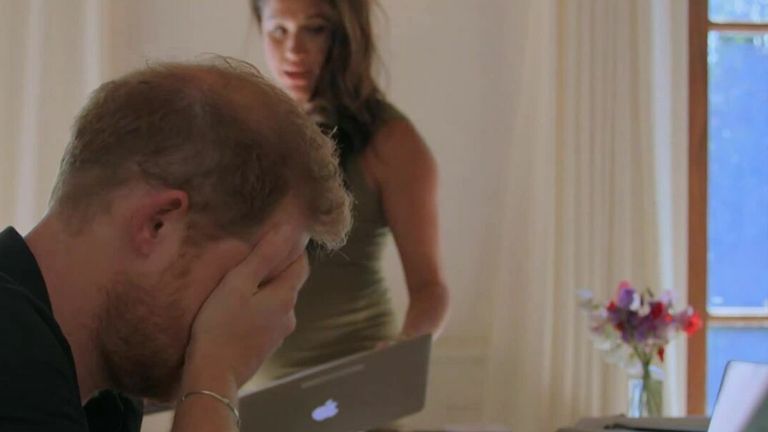 Meghan says ‘when family and family business are in direct conflict’.

In another clip, she says she was assured the press interest would die down after the couple got married.

“At that point I was still very much believing what I was being told which was, it’ll pass, it’ll get better, it’s just what they do right at the very beginning,” she says.

Stepping back from royal duties

The Duke and Duchess of Sussex announced they were stepping back from royal duties in January 2020.

In a statement at the time, the couple wrote: “After many months of reflection and internal discussions, we have chosen to make a transition this year in starting to carve out a progressive new role within this institution.

“We intend to step back as ‘senior’ members of the Royal Family and work to become financially independent, while continuing to fully support Her Majesty The Queen.”

A Buckingham Palace spokeswoman said at the time: “We understand their desire to take a different approach, but these are complicated issues that will take time to work through.”

The couple later agreed to a 12-month review in which they would step back from frontline royal duties.

The deal included a statement saying the couple wanted to “live a more independent life as a family, by removing the supposed ‘public interest’ justification for media intrusion into their lives”.

Meghan previously addressed privacy in her interview with Oprah Winfrey in March 2021.

In footage which was not originally aired in the broadcast, she said: “I think everyone has a basic right to privacy. Basic.

“We’re not talking about anything that anybody else wouldn’t expect.”

“If you’re at work and you have a photograph of your child on your desk, and your coworker says, ‘Oh, my gosh, your kid’s so cute. That’s fantastic! Can I see your phone so I can see all the pictures of your child?’

“You go, ‘No. This is the picture I’m comfortable sharing with you'”.

She was critical of claims that the couple had asked for privacy, saying: “They’ve created a false narrative. I’ve never talked about privacy.”