Prince William’s godmother has resigned from her duties at Buckingham Palace after repeatedly asking a black visitor “where she really came from”.

Lady Susan Hussey, 83, quit after repeatedly questioning Ngozi Fulani, chief executive of charity Sistah Space, during a reception at the palace on Tuesday.

A spokesperson for her godson the Prince of Wales said it was “really disappointing” to hear what had happened.

“Obviously, I wasn’t there, but racism has no place in our society. The comments were unacceptable, and it is right that the individual has stepped aside with immediate effect,” the Kensington Palace spokesperson said.

Ms Fulani works as an advocate for survivors of domestic abuse and described the exchange as a “violation”.

She wrote on Twitter that Lady Hussey, who she refers to as ‘Lady SH’, “approached me, moved my hair to see my name badge” and then insisted on asking her “what part of Africa are you from”.

Despite her saying she is British, the aide said: “I can see I am going to have a challenge getting you to say where you’re from.”

It comes after Meghan, Duchess of Sussex, claimed last year that a member of the royal household raised concerns about what colour skin her son Archie would have before he was born.

Conversation with Lady Susan Hussey as reported by Ngozi Fulani

Lady SH: “Where are you from?”

Lady SH: “No where do you come from?

Ms Fulani: “We’re based in Hackney.”

Lady SH: “No, what part of Africa are YOU from?”

Ms Fulani: “I don’t know, they didn’t leave any records.”

Lady SH: “Well, you must know where you’re from, I spent time in France. Where are you from?”

Lady SH: “No, but what Nationality are you?”

Ms Fulani: “I am born here and am British.”

Lady SH: “Oh I can see I am going to have a challenge getting you to say where you’re from. When did you first come here?”

Ms Fulani: “Lady! I am a British national, my parents came here in the 50’s when…”

Ms Fulani: “No lady, I am of African heritage, Caribbean descent and British nationality.”

Buckingham Palace said of Tuesday’s events: “We take this incident extremely seriously and have investigated immediately to establish the full details.

“In this instance, unacceptable and deeply regrettable comments have been made. We have reached out to Ngozi Fulani on this matter, and are inviting her to discuss all elements of her experience in person if she wishes.

“In the meantime, the individual concerned would like to express her profound apologies for the hurt caused and has stepped aside from her honorary role with immediate effect.

“All members of the household are being reminded of the diversity and inclusivity policies which they are required to uphold at all times.”

In an interview with LBC, Ms Fulani said “nobody from the palace has spoken to me”, but she would be “happy to have a conversation to bring about a positive solution”.

Reflecting further, she said: “To be honest I wish that the lady could be spoken to and know the damage she has caused and preferably not be front-facing.

“But for her to resign, that has nothing to do with me. I don’t feel good about that. She’s an elder and in my culture we respect elders.

“Conversations need to be had with the relevant people so this kind of thing doesn’t happen again.”

In comments to the Independent website she said: “This is bigger than one individual. It’s institutional racism… This incident is unfortunate and shows that nothing has changed.”

Who is Lady Susan Hussey?

The 83-year-old served as Queen Elizabeth II’s lady in waiting for more than 60 years.

In the role, she would help the Queen with daily activities and, while her presence has not largely been reported on, she was often spotted in the background of key royal engagements.

She is the daughter of Geoffrey Waldegrave, the 12th Earl Waldegrave and Mary Hermione, Countess Waldegrave, and was married to the late BBC chairman Marmaduke Lord Hussey.

In a show of her close relationship with the royal family, she was made Prince William’s godmother, and was the only person to accompany the Queen to the funeral of Prince Philip in April 2021.

Only 30 mourners were allowed to attend the service at St George’s Chapel, Windsor Castle, due to COVID restrictions.

Lady Susan Hussey was appointed as a lady in waiting following the birth of Prince Andrew in 1960 and was reportedly employed to help deal with the Queen’s correspondence.

The ‘Number One Head Girl’ of the royal household, as she was reportedly known, was also one of the key staff members who were part of the Windsor Castle bubble during the COVID pandemic.

In 2013, she was made a Dame Grand Cross of the Royal Victorian Order by the Queen – the highest rank personally granted by the sovereign.

Following the Queen’s death, she was appointed the role of lady of the household to help King Charles at formal occasions.

One of Queen’s closest confidants

Lady Hussey was married to Marmaduke Hussey, former chairman of the BBC’s board of governors and was one of the Queen’s closest confidants and ladies in waiting for more than 50 years.

Despite strict COVID restrictions, she accompanied Her Majesty to Prince Philip’s funeral.

Ms Fulani said the incident left her with “mixed feelings” about the event on stopping violence against women and girls, where other guests included Ukraine’s first lady Olena Zelenska and Jordan’s Queen Rania.

Responding to messages of support, she added that being unable to report the issue or tell the Queen Consort about it added to her distress.

“There was nobody to report it to. I couldn’t report it to the Queen Consort, plus it was such a shock to me and the other 2 women, that we were stunned to temporary silence,” she wrote.

“I just stood at the edge of the room, smiled & engaged briefly with who spoke to me until I could leave.” 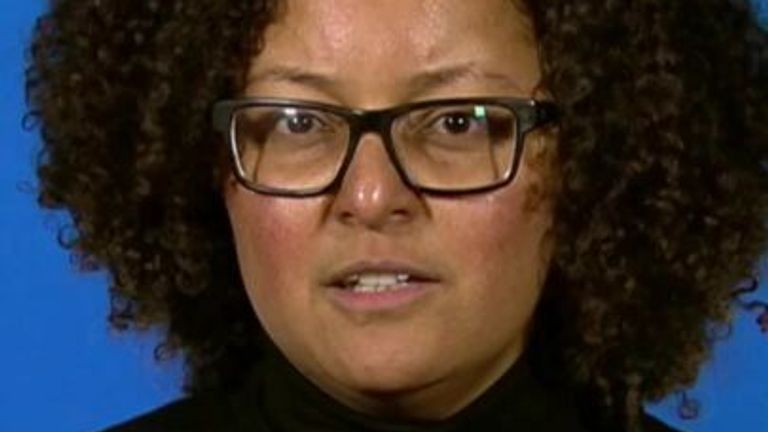 Mandu Reid, leader of the Women’s Equality Party, who was stood next to Ms Fulani and witnessed the exchange, said she was “stunned”.

She told Sky News: “It was really uncomfortable. If Ngozi was a white woman there is no way that line of questioning would have taken place. It’s not what you expect.”

“We weren’t gate crashers, but we were made to feel almost like trespassers.”

Asked if she was reassured by Lady Hussey stepping down and apologising, she said no – and that the royals need to “step up” and acknowledge that “institutional racism is part of the culture”.

Read more:
Harry and Meghan faced ‘credible threats’ from extremists
Princess of Wales says ‘not enough being done’ for under-fives

Based in Hackney, east London, Ms Fulani’s organisation Sistah Space is a support organisation for women of African and Caribbean heritage affected by abuse.

It said in a statement: “We at Sistah Space would like to raise awareness about this issue rather than shame another individual.”

Domestic abuse is one of the key causes championed by the Queen Consort since she became part of the Royal Family.

Government minister Paul Scully said there is a “lot of casual racism around and I say that as someone who’s half Burmese”.

He said growing up he had “slightly darker skin” than his friends and there was name-calling but it was “written off as banter” and although he said he did not have a bad childhood there are “ways and means” of going about enquiring about someone’s heritage.