China’s military advances could “eventually lead to a clash” and the UK has been “asleep” to the threat it poses for the last 30 years, an influential Tory MP has warned.

Tobias Ellwood, the chairman of the defence select committee, said Beijing is “taking advantage of a timid West” and Rishi Sunak’s speech declaring the end to the golden-era of relations was “the first solid foreign policy statement on China for many, many years”.

“This idea that if we do simply more trade with China, they’re going to open up to political reform, that clearly isn’t going to happen,” he told Sky News.

“China, under President Xi, is pursuing a competing vision with the West that I think could lead the world splintering into two spheres of influence. He’s taking advantage of the timid West that’s unwilling to date to call China out.”

Mr Ellwood called China’s expanding authoritarian influence “enormous right across the world” and said it’s important to call a “police state out and actually stand up for our rights, our values, the international rule of law”.

He went on to call China a “sleeping dragon”, saying as well as stockpiling nuclear weapons it is expanding its army, air force and navy, which he said was “colossal”.

“It’s not just the South China Sea that they’re dominating, they’re starting to move their assets and put bases around the world,” he said.

“As I say, this is actually competing with the Western way of life, and it’s going to lead eventually to a clash. And we’ve been asleep for the last two or three decades.”

In a speech on Monday, Prime Minister Rishi Sunak called China a “systemic challenge to our values and interests” as he signalled a hardening of diplomatic relations with the regime.

It came amid a crackdown on protests against COVID lockdowns in many Chinese cities, as people took to the streets in the biggest show of civil disobedience in decades. 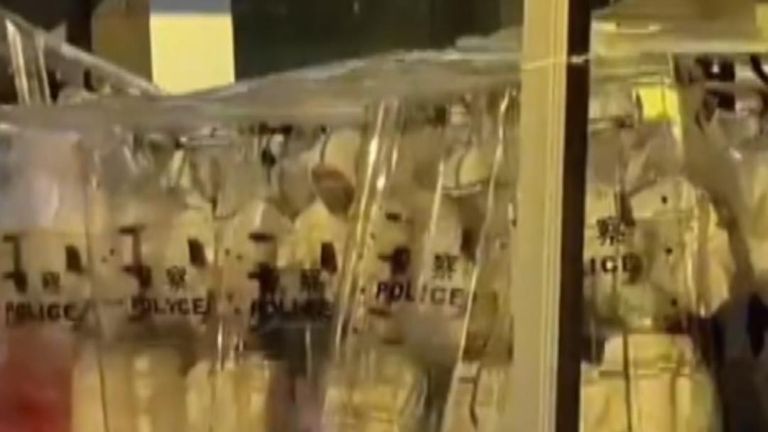 China has been cracking down on anti lockdown protests

However, Mr Sunak stopped short of calling China a “threat” – as he previously has done – and said the UK can’t ignore China’s importance on world affairs.

But tensions could escalate further as MPs from the foreign affairs select committee visit Taiwan this week.

Beijing considers the self-ruling island to be part of its territory.

UK ‘must prepare for attack on Taiwan’

When US Speaker Nancy Pelosi visited Taiwan in August, it prompted President Xi Jinping to launch a range of military and diplomatic measures, including severing climate change talks with Washington for several months.

However, Mr Ellwood – who was speaking from Taipei – said it is important to prepare for a potential invasion of Taiwan by a “more aggressive, more assertive” China.

“President Xi has made it clear that it (China) will use forces necessary to take this island and I think there are lessons to be learned from Ukraine,” Mr Ellwood said.

“China is now getting more aggressive, more assertive, and if President Xi fulfils his promise, the impact would be huge.

“So it’s so important to understand what is going on here and prepare for what might be coming over over the hill.”