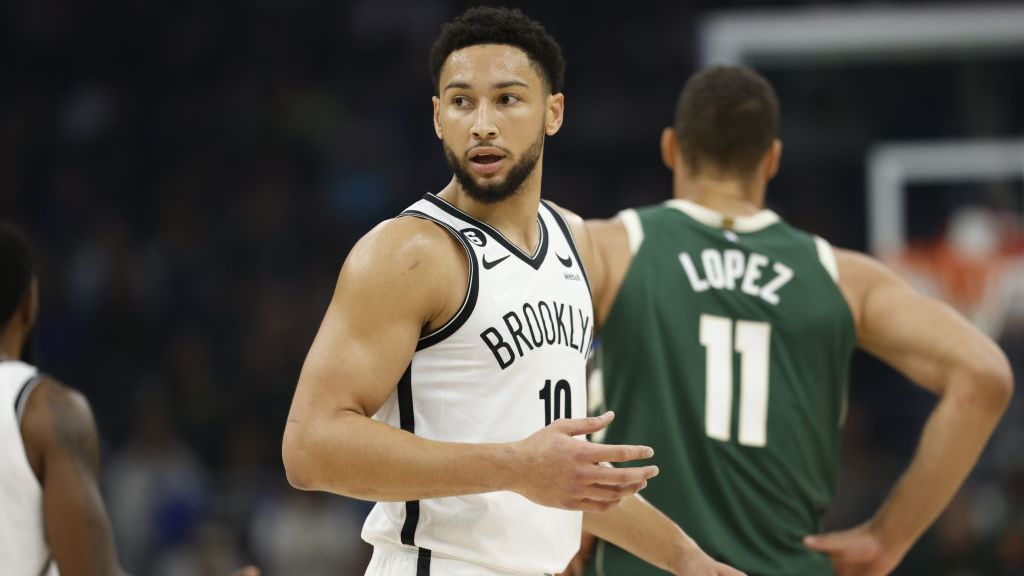 Nets coach Steve Nash has been making that clear by preaching for more aggression from Simmons, but Nets point guard Kyrie Irving took those pleas to a new level Wednesday night.

With just over nine minutes left in the third quarter of Wednesday’s 110-99 loss to the Milwaukee Bucks, Irving drove through the lane and passed the ball to Ben Simmons inside the paint. Instead of turning to look at the rim, Simmons got the ball and immediately passed it back to Nets forward Kevin Durant, who was standing beyond the 3-point line.

Simmons continues to struggle to find a rhythm on the floor after almost a year and a half away because of mental health concerns while waiting for a trade out of Philadelphia, and then a back injury that required surgery over the summer.

“I’m not going to say I’m being patient or humble about it, but the reality is that we’re just going to keep having to try this experiment every single night until we get the right recipe.”

Nets players and coaches have repeatedly stood behind Simmons in his return and through his slow start. Simmons is averaging just 5.7 points, 6 rebounds and 7 assists over his first four games. He has fouled out in two of the four games and is averaging 3.7 turnovers per 28 minutes. Despite the fact the Nets have started slowly with a 1-3 record, Irving and the rest of his teammates still say they believe better days are ahead for Simmons and the group.

“I just think like, if we’re going to come in and be honest as a team, I’m not trying to just be critical over what Ben’s done right or done wrong every single night,” Irving said. “He’s a basketball player, he’s a professional, he has the skills to be a great professional, he’s done it in the past. And he hasn’t played in two years. So you guys keep coming in here asking me, ‘What about Ben?’ ‘What about Ben?’ and it’s just he hasn’t played in two years. Give him a f—ing chance.”

Kyrie Irving urges patience with Ben Simmons after the Nets’ loss to the Bucks.

Irving has defended Simmons several times since training camp and has given him advice about how to navigate some of the vitriol he has dealt with on social media.

“We stay on his s—,” Irving said. “I wish I could say other words ’cause I’m from Jersey, but we stay on him. You just stay on him and we’re just here to give him positive affirmations and just let him hoop. And then while he’s hooping and getting back into it, we’re going to really have to jell as a team in order to learn how to win as a group. It’s not an individual job to go out there and be Superman.”

Simmons said he “definitely” feels better on offense after each game.

“I think each game I feel more comfortable,” Simmons said. “I think once I got hit and tweaked my back a little bit I was a little hesitant after that, as you guys could probably see, but I definitely feel like in each game I’m progressing a little bit in terms of my physicality and aggression.”

Simmons tweaked his back in the first quarter but remained in the game. He is hopeful he’ll be able to play in Thursday’s game against the Dallas Mavericks. Nash continues to outwardly support Simmons and spent several minutes with him after Wednesday’s shootaround going through different ways to impact the game.

“He’s a huge piece of our team,” Nash said, “and we just got to support him and keep working with him and trying to give him as much confidence as possible. … We do what we can every day. We watch film, we talk, we prepare for games. And in time it’s going to work, it’s just going to take time and we have to have some patience and we all have to participate in this and fight for it.”