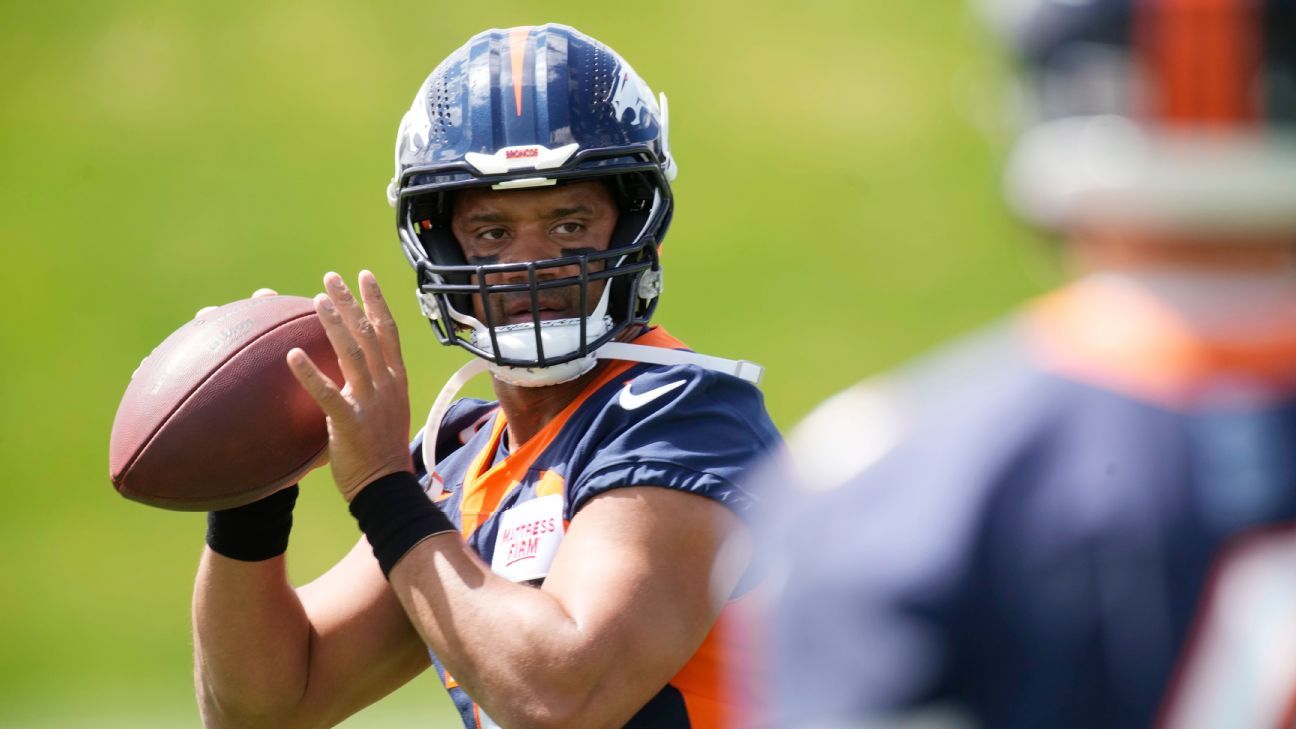 ENGLEWOOD, Colo. — Things feel different around the Denver Broncos as they exit their offseason program.

For the first time since Peyton Manning roamed their suburban Denver complex in 2015, they have a quarterback with a résumé. Russell Wilson has amped up expectations, optimism and pushed the standard back to the postseason, a place the Broncos have not been since Manning retired.

The Broncos appear to have answered their biggest question following the 2021 season by adding Wilson. As they head into summer hiatus, here’s a recap of the moments that defined their offseason:

A QB about town

Wilson is everywhere, like some kind of beam-me-up, time-zone jumper who gives the commencement speech at Dartmouth one day and leads the 2-minute drill in 11-on-11 the next.

Or maybe, as Melvin Gordon III said with a laugh: “When you’re making $30 million a year, you can get a private jet to get you around to wherever you want.”

Wilson has had his foot to the floorboard throughout the offseason with extra meetings, some extra onfield work and the expectation there will be more before training camp.

“We’ll let guys get away … spend family time, and do whatever they want to do — travel or whatever it is,” Wilson said. “The last couple weeks [in July], we’ll really spend some time before we come back. We’ll spend some quality time down in Southern California.”

The balance is always the knowledge of when to push and when not to. But Wilson has done exactly what the Broncos had hoped. He has hit reset on a team that had missed the postseason six consecutive times and made it clear if you’re not interested in “putting in that work” you might be more welcome doing something else.

The Broncos have been one of the most successful franchises of the Super Bowl era. The team had more Super Bowl appearances than losing seasons during owner Pat Bowlen’s tenure and still have a sellout streak dating to 1970.

Now they have the wealthiest ownership group, led by Rob Walton, in the NFL. Walton’s daughter and son-in-law (Greg Penner and Carrie Walton Penner) as well as Mellody Hobson give the Broncos, potentially, unmatched resources in their quest to add to the three Lombardi trophies already in the lobby.

How aggressively the new ownership group will flex those financial muscles is unknown.

“I think the new ownership group is going to be great,” Wilson said of his meeting with the group. “Obviously, I think there has been such an amazing tradition here. I know how much the Bowlen family meant to this Broncos organization. They will forever be a part of this organization. I think with change there comes great opportunity.”

The NFL’s finance committee is reviewing the group and a formal vote of the league’s team owners to approve the Broncos’ new group is expected by late July.

Coach Nathaniel Hackett and his staff did plenty practice field mix-and-match during the offseason, but at no position did things look undecided more than on the offensive line.

Billy Turner [left knee], who signed in free agency, didn’t participate in organized team activities or minicamp because of his injury. Beyond left tackle Garett Bolles, it appears training camp will be what offensive coordinator Justin Outten says is “a competitive situation” across the board.

That said, Lloyd Cushenberry III took nearly all of the snaps with the starters at center and Wilson has taken every opportunity to praise Cushenberry’s work throughout the offseason, including when Cushenberry went to San Diego to work with Wilson and the team’s pass-catchers shortly after Wilson arrived.

Dalton Risner, Netane Muti, Quinn Meinerz and Graham Glasgow are in the mix at guard — all four started games last season — with Turner, who has also played guard during his career, Tom Compton and Calvin Anderson all in the mix at right tackle. Anderson took most of the snaps with the starters there during OTAs as well as minicamp.

With the outside zone run scheme, movement is at a premium for them all — Hackett used the phrase “running off the ball” almost any time he was asked about any lineman’s progress. But overall the group is likely the Broncos’ most unsettled spot as the team exited the offseason program.

The Broncos didn’t get an on-field look at their most significant free-agent signing — outside linebacker Randy Gregory.

The Broncos knew about Gregory’s shoulder issues when they signed him to a $70 million deal. He underwent surgery shortly after he signed with the Broncos and did not participate in any of the team’s OTAs or minicamp practices.

More people play on ESPN than anywhere else. Join or create a league in the No. 1 Fantasy Football game! Sign up for free >>

Hackett has been oddly coy throughout May and June about if Gregory will be cleared by the time training camp opens, but defensive coordinator Ejiro Evero said Gregory has done his part to learn the new scheme.

“He’s been doing a good job on the things he can control,” Evero said. “He’s been great in the classroom, he’s been great asking questions and trying to learn as much as he can. I’m really pleased with what he’s done so far.”

Wide receiver Jerry Jeudy was a limited participant throughout the offseason as well. He was arrested May 14 on a misdemeanor domestic violence charge. Charges were eventually dismissed May 31, but he was held out of practices as the case was reviewed by the Arapahoe County district attorney’s office.

Jeudy then suffered a leg injury when he did return to the practice field, so he didn’t finish out OTAs or participate in the two mandatory minicamp practices. Coming off a no-touchdown season in 2021, Jeudy will have at least some ground to make up on the other receivers when camp opens.

REE Automotive unveils Class 3 box truck powered by its P7 electric chassis and REEcorners
Boris Johnson met former KGB officer without officials when Foreign Secretary
Truss: ‘I’ll be your minister for the Union’. Sunak: ‘I’ll make Britain energy secure’
Elon Musk says Tesla has made over 3 million cars
Many of these children could be treated – but doctors are struggling to keep them alive