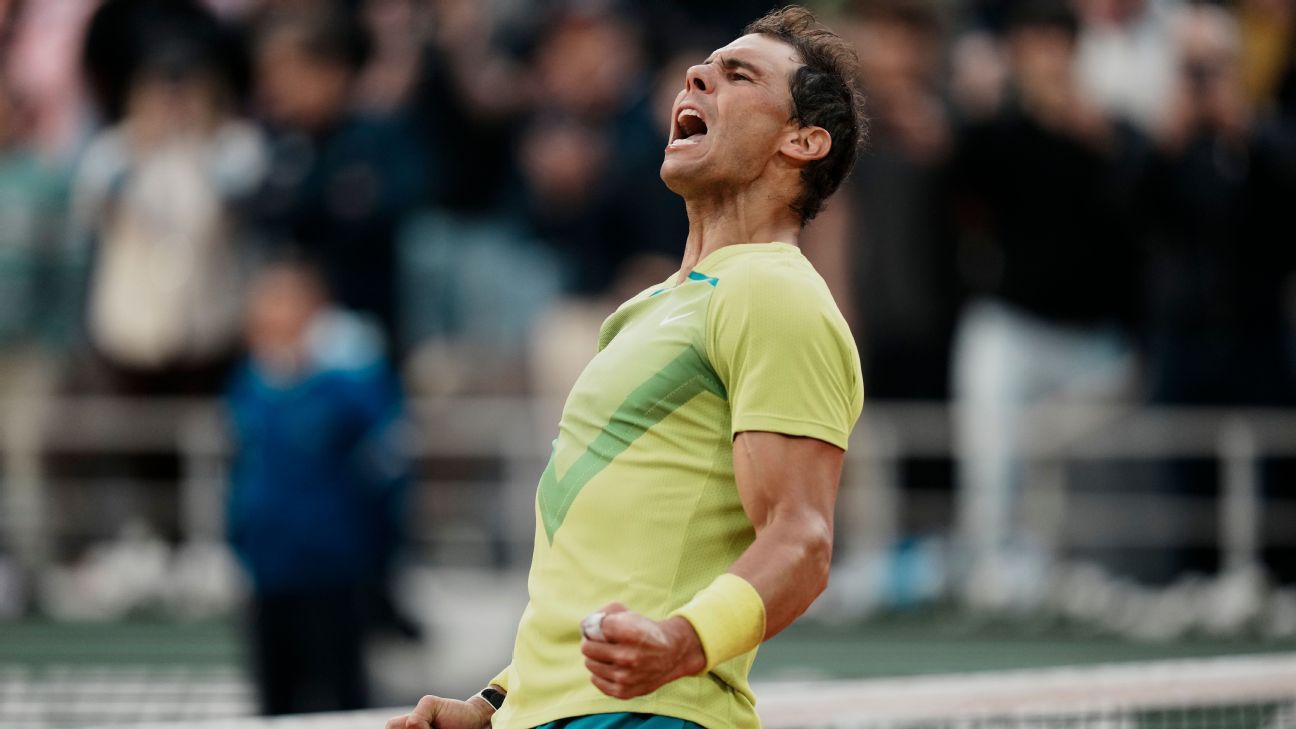 PARIS — Rafael Nadal is used to overcoming adversity. His entire year has been anchored around it — whether it’s his chronic foot injury, a rib fracture or his own Uncle Toni attempting to mastermind his downfall.

But Nadal has remained in control of his 2022 script, despite his five-set win over Felix Auger-Aliassime on Sunday that stretched him to his maximum.

There were times on Sunday when Nadal looked human. We’re not used to seeing him tested like this at this stage. It was jarring. But then came a passing shot at the net, and the hop, skip and three fist pumps, and everything was back to normal.

The reality, though, is that Nadal’s 2022 season is far from normal. The Nadal of the previous 13 titles here in Paris is now a different player, a man who lives in constant pain and is always hoping his body marries his mind’s instincts on the court.

Somehow there’s still a synergy that allows him to keep on winning.

His triumph at the Australian Open was completely ridiculous, given that six weeks prior to the start of the tournament he was talking about the possibility of retirement. But across the next fortnight he stretched ahead of the rest to secure his 21st Grand Slam title. He went on to take the Mexican Open, and with Djokovic’s schedule unclear at that stage, and Roger Federer absent, it looked like it’d be the year of Nadal.

But again there was a twist in the road, this time a fractured rib he suffered while at Indian Wells in March. He missed six weeks of the season.

He returned for the Madrid Open and ran into a Carlos Alcaraz-sized wall in the quarterfinals. Then a week later he was again talking about the pain he lives with every single day after he fell to Denis Shapovalov in Rome.

“I am a player living with an injury,” said Nadal. “That’s it. “Unfortunately my day-by-day is difficult, honestly. Of course, it’s difficult for me to accept the situation sometimes, no?”

He said he had a dream, and that was to make Roland Garros — but he didn’t make any bold predictions.

Just like in Melbourne, expectations around Nadal were lower than usual heading into Paris. But once Nadal was seen practicing on the clay, all the usual trademarks we’ve come to know from him were there. He even smiled at times. It felt like he was going to be OK.

On Sunday on Philippe-Chatrier, he walked out to an incredible reception from the crowd. Up on the screen was his frankly astonishing Roland Garros record: Won 108. Lost 3. The ghosts of Nadal’s triumphs are everywhere — even immortalized in a sculpture of him here.

But there was something about this match with Auger-Aliassime that felt uneasy. Maybe it was Uncle Toni sitting there watching — the man who coached Nadal from boyhood to 2017, and now was coaching his opponent.

Toni Nadal said he’d keep a low profile, but there he was in the front row in his immaculate white shirt like some sort of benevolent Roman emperor. He said in the buildup, “I want Rafael to win. If he were to lose, it would be a less painful loss because the player I work with would win, but I don’t like to deceive anyone.”

The only time Toni Nadal moved in the first set was when Auger-Aliassime leapt for an incredible reverse volley, which he politely applauded.

“I didn’t start the match well — it was a tough first set,” Rafael Nadal said.

Auger-Aliassime broke him twice to make it 3-1, and then 5-1, and took the first set. And as Nadal malfunctioned, there was this feeling in the stadium that perhaps the much-anticipated quarterfinal between Nadal and Novak Djokovic wasn’t going to happen; that everything we’ve taken for granted from Nadal on Chatrier was shifting in front of our eyes.

Even Nadal’s various routines were distorted. Here at Roland-Garros, there’s the addition of three taps on his shoes to remove the dusty clay — first the right shoe, then left, then right again. Then there’s the swipe of the hair, the tug on the shorts, the 14 or so bounces of the ball and the serve. Prematch he lays everything out, places his six drink bottles in the fridge behind the umpire and places his towels at either end — they’re precise, all stretched out in a certain manner. It’s all precise.

But this time he forgot to do one end. At 1-1 in the first he looked bemused as he tried to find his towel, looking around to see whether it had escaped him. But he had forgotten to lay those ones out. Nadal doesn’t forget these things.

It looked like Nadal’s bid here at Roland Garros was starting to slip away from him, but then he took charge, storming the next two sets. Auger-Aliassime wasn’t deterred, as he forced it to a fifth with Nadal struggling to read the young Canadian’s serve.

But Nadal wasn’t ready to slip away into the shadows. He has overcome worse this year. The fifth set was about experience, and Nadal’s muscle memory saw him through. Toni Nadal stayed while his nephew danced around the court like he was 20 again against his new protégé.

Nadal will be relieved to come through this, and he’ll find out in the next 24 hours how much of an impact it has had on his foot. And then there’s the Djokovic-shaped obstacle lying in wait in the quarterfinals. It’ll likely be an evening match too, something Nadal doesn’t like: the conditions will be colder, the ball slower.

“I’m going to try my best, I don’t know what’ll happen, but I’ll fight until the end,” Nadal said.

As Nadal proved on a chilly Sunday afternoon on Philippe-Chatrier, it’s still his house, and it’s going to take some effort to get the keys off him.

Armed officers waited in Texas school corridor for an hour as gunman rampaged
Tesla is tracking to have a working prototype humanoid robot by the end of September
Russian auctions Nobel Peace Prize medal – and raises £84m for Ukrainian refugees
Quick Charge Podcast: June 22, 2022
Sorry Anthony Yarde, Artur Beterbiev vs. Dmitry Bivol for the 175-pound crown should be next