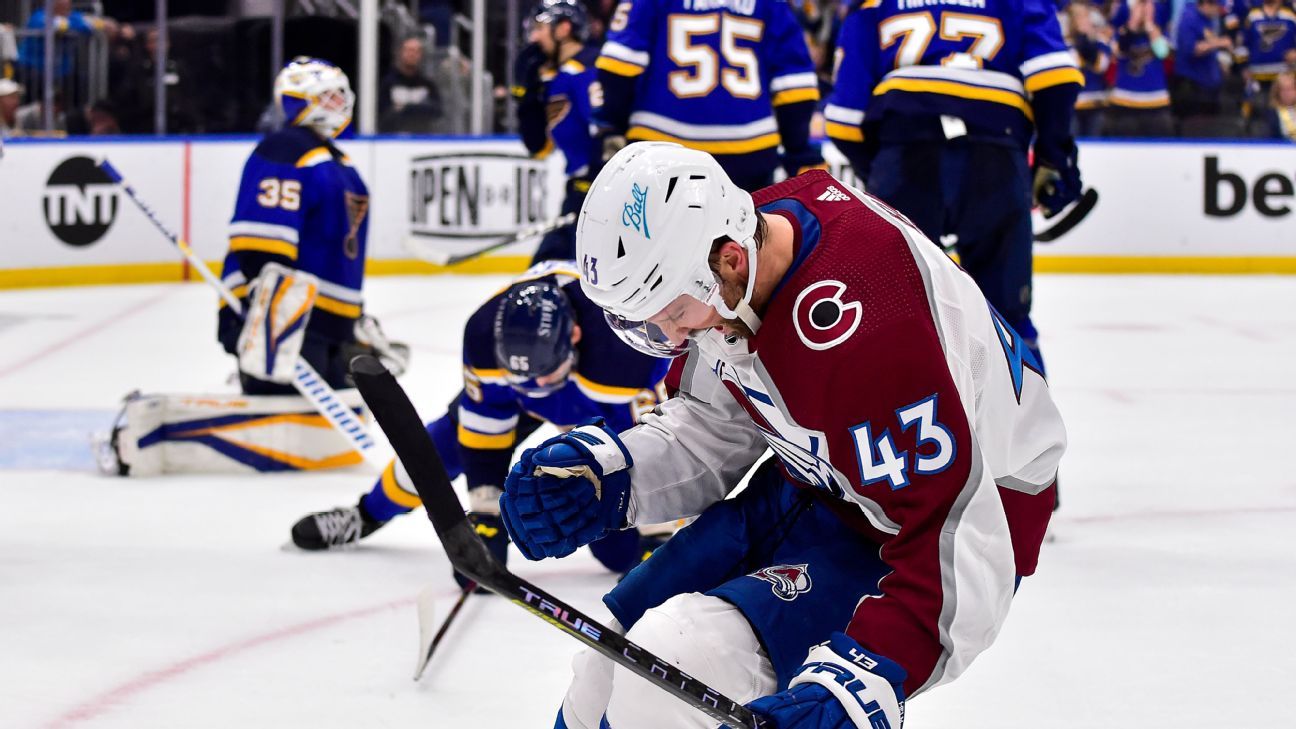 ST. LOUIS — Darren Helm‘s goal with 5.6 seconds left in the third period gave the Colorado Avalanche a 3-2 win to eliminate the Blues in Game 6 on Friday night in St. Louis.

Helm, a 35-year-old fourth-liner, scored his first of the playoffs on a blast that beat Blues goalie Ville Husso (36 saves). The seconds were ticking down to what seemed like an inevitable overtime. Helm’s goal sent the Avalanche bench into celebration and the Enterprise Center crowd into stunned silence.

Until that point, Game 6 saw the Avalanche carry play at times while the Blues effectively counterpunched.

The Avalanche had the better of the play at 5-on-5 in the first period, with Husso coming up with key stops on Mikko Rantanen and Gabriel Landeskog. But it was the Blues who left the period with the one-goal advantage. Defenseman Niko Mikkola kept the puck in the Avalanche zone at the point and sent it over to Robert Thomas. The Blues center, who had two goals in Game 5 for his first two points of the series, found defenseman Justin Faulk open across the zone. Faulk snapped a shot over goalie Darcy Kuemper‘s shoulder for the 1-0 lead with a minute left in the first period.

The Blues opened the second period with sloppy and uninspired play, and the Avalanche made them pay. Forward J.T. Compher followed up a Josh Manson shot by tucking the puck past Husso on the doorstep of the crease at 5:19 of the second period. It was Compher’s first of the postseason.

St. Louis regained the lead thanks to a misplay by Colorado defenseman Jack Johnson, who entered the series in Game 4 after a season-ending injury to defenseman Samuel Girard. Johnson attempted to keep the puck at the St. Louis blue line but fumbled it away to Brayden Schenn to spark a 2-on-1 for the Blues. With Manson sliding to protect against the pass, Schenn still found winger Jordan Kyrou for his seventh goal of the postseason at 9:34.

The Blues squandered a couple of chances to build their lead, including an open net on the power play that saw Manson save a goal and a breakaway chance for Kyrou that he missed. The second period ended with St. Louis up 2-1.

In the third period, Husso continued his strong play, but defenseman Colton Parayko — who had a gaffe-filled game — put the puck into the crowd for a delay of game penalty at 8:19. The Blues’ penalty kill worked hard to kill off the Avalanche power play, but with one second remaining on it Compher scored his second of the game past Husso to tie the game 2-2 at 10:18.

Then Helm played the hero, sending the Avalanche to the conference finals.

Volvo tests the world’s first hydrogen-fueled articulated hauler
‘They deserve to have it’: PM says he hopes next year’s Eurovision can be held in Ukraine
‘We cannot carry on with business as usual’: Oliver Dowden quits as Tory chair after by-election mauling
Double blow for Boris Johnson as Tories plunge to two by-election defeats
Russian auctions Nobel Peace Prize medal – and raises £84m for Ukrainian refugees