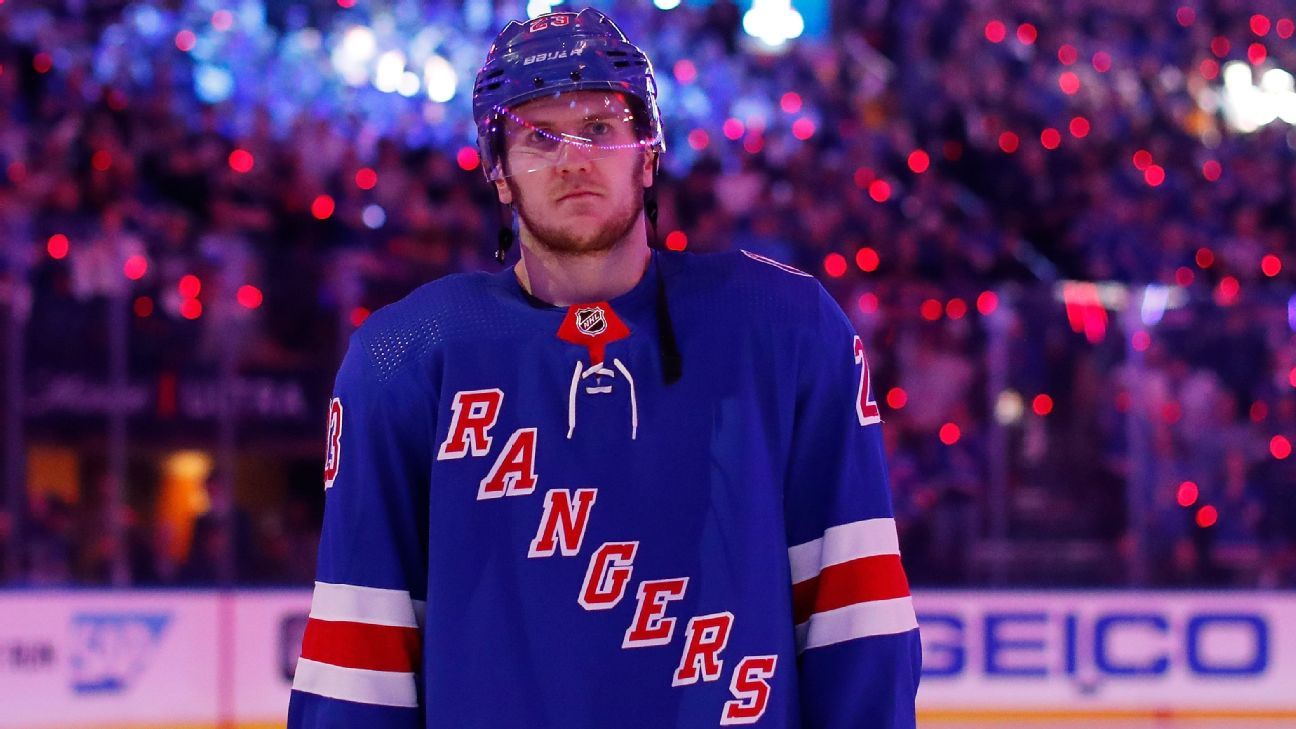 As the 2022 Stanley Cup playoffs reach the second round, it’s time to check in on the race for the Conn Smythe Trophy for playoff MVP.

Keep in mind that the Conn Smythe is based on a player’s performance during the entire postseason, not just the championship round.

Here’s a look at the field at the start of Round 2:

No one had the impact on a team that McDavid had on the Oilers in the first round.

Please recall that Edmonton trailed the Los Angeles Kings 3-2 heading into Game 6. What happened next: McDavid was on the ice for all six goals the Oilers scored in their two straight wins to take the series, tallying two goals and three assists in the process. For the series, McDavid was on the ice for 19 of the Oilers’ 27 goals. He had points in every game except Game 4, when Jonathan Quick didn’t allow a goal.

McDavid’s 14 points in the series are the third-most in an opening Stanley Cup playoff round by an Art Ross Trophy winner, trailing only Mario Lemieux (17 in 1992 against the Washington Capitals) and Wayne Gretzky (15 in 1987 against Kings). Pretty good company to keep, and he’s just getting started.

We’ll group these two Avalanche stars together, but obviously only one of them can hoist the MVP trophy if Colorado wins the Cup. Many sportsbooks have them as co-favorites as the second round begins.

MacKinnon had five goals in four games against the Juuse Saros-less Nashville Predators. But it was Makar that made a little history in Round 1: Makar’s 10 points were the most by a defenseman in the first four games of a postseason in NHL history. The Professional Hockey Writers Association, which helps select the Conn Smythe winner, already handed Makar a Norris Trophy nomination. One assumes he’d have the edge in a 50-50 matchup with MacKinnon.

It’s hard to grab the spotlight when Jake Oettinger is stopping 272 of 285 shots across the ice for the Dallas Stars. But Markstrom was outstanding for the Flames, posting a .943 save percentage and helping Calgary to a 1.53 goals-against average. He posted a 1-0 victory in Game 1 and limited the Stars to a single goal in two other wins. Goalies have won the Conn Smythe 17 times, but Tampa Bay Lightning goalie Andrei Vasilevskiy in 2021 was the first one to win in the past nine postseasons.

One of the best stories of the postseason. Verhaeghe had six goals and six assists in the Panthers’ first-round win over the Capitals. His 12 points trailed only McDavid.

But it wasn’t just what he scored but when: Four of his six goals either tied scores or gave the Panthers a lead, including two overtime game winners. One of those clinched the series in Game 6.

Barkov has been a player many assumed could be the MVP if the Panthers go all the way, given his point-per-game offense and defensive reputation, which earned him a Selke Trophy nomination.

But watch out for Giroux, who had seven points in the first round, with five of them coming in the final two wins. He also has the narrative piece: a trade deadline blockbuster acquisition, who would win the first Cup of his career if the Panthers do.

It’s a little stunning to think that the Rangers are in the second round and goaltender Igor Shesterkin isn’t among the Conn Smythe favorites — yet, at least.

If New York had an MVP favorite, it would likely be Zibanejad, its leading scorer (11 points) who had a huge goal to tie the score in Game 7 against Pittsburgh and an assist on Artemi Panarin‘s overtime series winner. Fox falls into a category that has produced its share of Conn Smythe winners: a point-producing defenseman (10 points in the first round) who logs a large amount of average ice time — 28:25 on average through seven games, although that was a bit inflated by Game 1’s triple overtime.

Markstrom might own the MVP corner for the Flames after the first round, but Johnny Hockey made a strong late addition to his case in Game 7. He assisted on Matthew Tkachuk‘s game-tying goal and then scored the overtime game winner to eliminate the Stars. He had eight points in seven games. How much does a playoff MVP trophy increase his contract ask as a free agent this summer?

Hedman already has one of these, winning playoff MVP during the Lightning’s first Stanley Cup in their back-to-back run. He had seven points in seven games against the Leafs, skating a team-high 25:42 per game. If the Lightning win another Cup, he’ll be a primary reason why. Keep in mind the voters love him: Hedman was named a Norris Trophy finalist for the sixth consecutive season.

Kucherov has been the playoffs’ best player on the power play through eight games. Given that a couple of his teammates already have MVP honors, could we see the voters seek to honor Kucherov? Heck, the post-series press conference alone would be worth it.

The Avalanche goalie missed their clinching game against the Predators after taking a stick near the eye. When he was in, he was awesome: .934 save percentage, helping the Avs to a 1.63 goals-against average. But he’d have to make a very strong case to overcome MacKinnon and Makar.

Another repeat customer, as O’Reilly won the Conn Smythe in the Blues’ 2019 Stanley Cup championship. That season, he led the Blues with 23 points in 26 games while playing incredible defense. He was one point behind David Perron after the first round. If the Blues advance, it’s going to be O’Reilly winning the matchup against Nathan MacKinnon. That will be a calling card for Conn Smythe consideration.

But Raanta has the numbers — .927 save percentage and a 2.37 goals-against average in six games — and, for now, the Canes’ crease as Frederik Andersen remains out with an injury.

Look, it would be the shock of the season if the Oilers somehow won the Stanley Cup and McDavid didn’t win MVP honors, based on what we saw in the first round. But let’s not sleep on Mike Smith.

The Edmonton goalie was second in save percentage (.938) after the first round. He had two shutouts, including in Game 7 over the Kings. He led all goalies with 10.4 goals saved above expected, per Money Puck.

Is there a scenario in which Connor, Evander Kane and Leon Draisaitl all get support at forward, and then Smith sneaks in as the “backbone” of a Cup run?

The Hurricanes star had five points in seven games in the first round, having the misfortune of having to generate offense against Patrice Bergeron. His line is the best offensive unit the Hurricanes have and should get going at 5-on-5 against New York.

We can’t in good faith put Shesterkin, the likely Vezina Trophy winner, in a top tier of the Conn Smythe watch at this moment. He gave up three or more goals in every game except his Game 2 win. He was pulled twice. But his performance in Game 7 was fantastic, and perhaps provides a boost in confidence heading into the second round.

After six games of uncharacteristic play from last season’s Conn Smythe winner, the Big Cat shut the door on the Toronto Maple Leafs in Game 7 and continued that strong play in Game 1 against Florida. He’s played a lot of hockey in the past two years, but he’s not done yet — especially in elimination games.

Gone but not forgotten

Thanks for the memories, dear members of the one-and-done club. We’ll always have the first round!