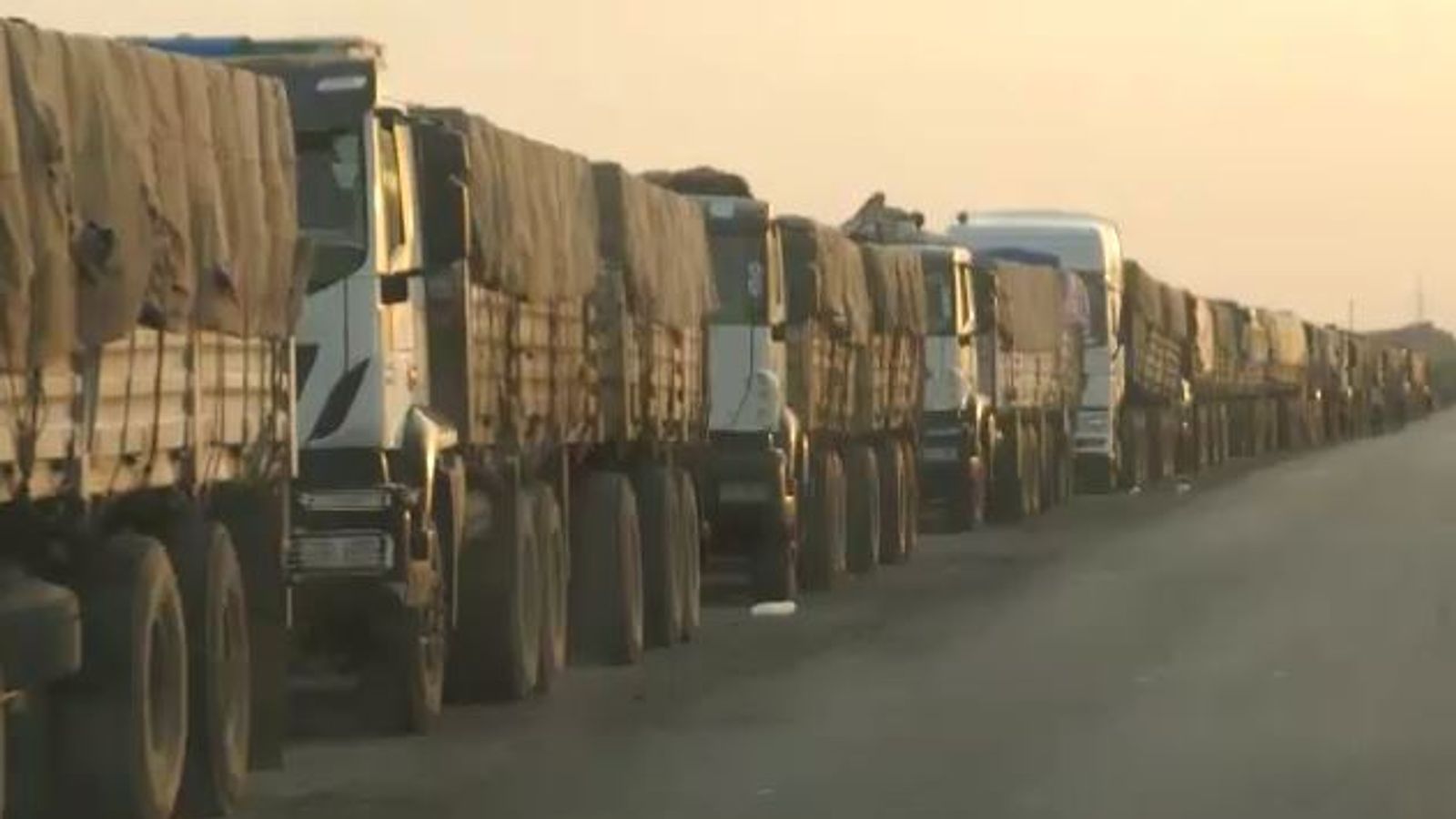 We could see a seemingly endless line of trucks as we headed down the highway in northern Ethiopia.

As their contents drew closer we knew the battle ground was shifting in this country’s increasingly nasty civil conflict.

There were thousands of troops perched on the back, clutching automatic weapons while fighting to stay upright. They were accompanied by specialist vehicles hauling artillery and tanks, moving at speed towards the region of Afar.

This arid and underpopulated place has been utterly overlooked as Ethiopia’s federal government and leaders of the restive region of Tigray battle for power and control.

But a major offensive, sanctioned by the country’s leader, Abiy Ahmed, has almost certainly stalled and fighters from the Tigrayan People’s Liberation Front (TPLF) were advancing on communities in Afar.

The region has played host to convoys of a very different sort in recent months as the UN’s World Food Programme (WFP) tries to send emergency aid into Tigray.

Estimating that some 400,000 Tigrayans are living in famine-like conditions, the WFP has created a ‘staging post’ in the regional capital of Semera, where humanitarian supplies are loaded onto oversized trucks and we watched as drivers set out on the two-day trip to the Tigrayan border.

But the terrain is difficult and the residents of Afar are decidedly hostile to what is a massive emergency operation.

We saw overturned trucks on the route to the border town of Abala and witnessed residents stealing bags of flour from the vehicles.

The drivers know that some trucks will be stopped – or attacked – and the road is too narrow to turn around.

Yet this is the only route they can use.

I spoke to one driver – a Tigrayan – as he was about to cross this internal frontier.

I asked him if people in Tigray need humanitarian aid.

“It’s needed, my feeling is I am doing important work,” he replied.

Yet the drivers know are taking a chance in the region of Afar.

“Are you worried about coming back?” I asked.

“Yes, I am but I haven’t had any problems yet. I’ve gone back and forth safely.”

The Afaris are angry, blaming Tigrayans for a series of raids and attacks on their communities and they made their displeasure clear to us.

“They kill us, not we kill them, they kill us and we are helping them, all the trucks are using this way and (we are) not stopping (them), not closing any roads,” said a local resident called Ali Mussa Ahmed.

“This is our border, they are killing us (and) we are supporting them,” said Abdu Ebrahim.

Some 60km to the north, near the Afar town of Shahigubi, we found 400 men living under the trees after they had been displaced from their homes by the fighting. Women and children had been sheltered in a nearby school.

I asked one elderly man how long he had been there.

“How long will you have to stay?”

“Who could ever say?” he replied.

The same simmering resentment exists here at this camp as residents struggle on one meal a day.

During our visit, the men cut up a camel and boiled the meat in a pot but we could see there would not be much to go around.

“These people have destroyed our livelihoods and then we witness all the support that they are getting by land and by air. It bypasses us directly,” said a man called Hamedur Nur.

It is a challenging time for the UN’s humanitarian staff as they try to keep the aid flowing into Tigray.

Three weeks ago, seven senior UN officials were expelled by the Ethiopian authorities for “meddling in the internal affairs of the country”.

The move followed pointed remarks by UN aid chief Martin Griffiths who said a nearly three-month-long “de-facto blockade” had restricted aid deliveries to just 10% of what was needed.

In a statement released on Wednesday evening by the Ethiopian Embassy in London, ambassador Teferi Melesse Desta said: “The government of Ethiopia takes its responsibility to safeguard those who have been affected by the ongoing conflict in the northern part of Ethiopia very seriously and has demonstrated its willingness and commitment to work with the international community to respond to the humanitarian crisis in the affected regions.”

PM says ‘all guidance was followed’ as Starmer accuses him of breaking COVID rules last Christmas with ‘boozy party’
Enron turned obscure businesspeople into household names. Here’s where they are now
NHL contender tiers at the quarter mark: Where every team ranks
People can enjoy Christmas if ‘sensible’ with masks and social distancing this month – top JCVI member
Maxwell’s sex-trafficking trial could answer key questions on Epstein but unlikely to solve all mysteries