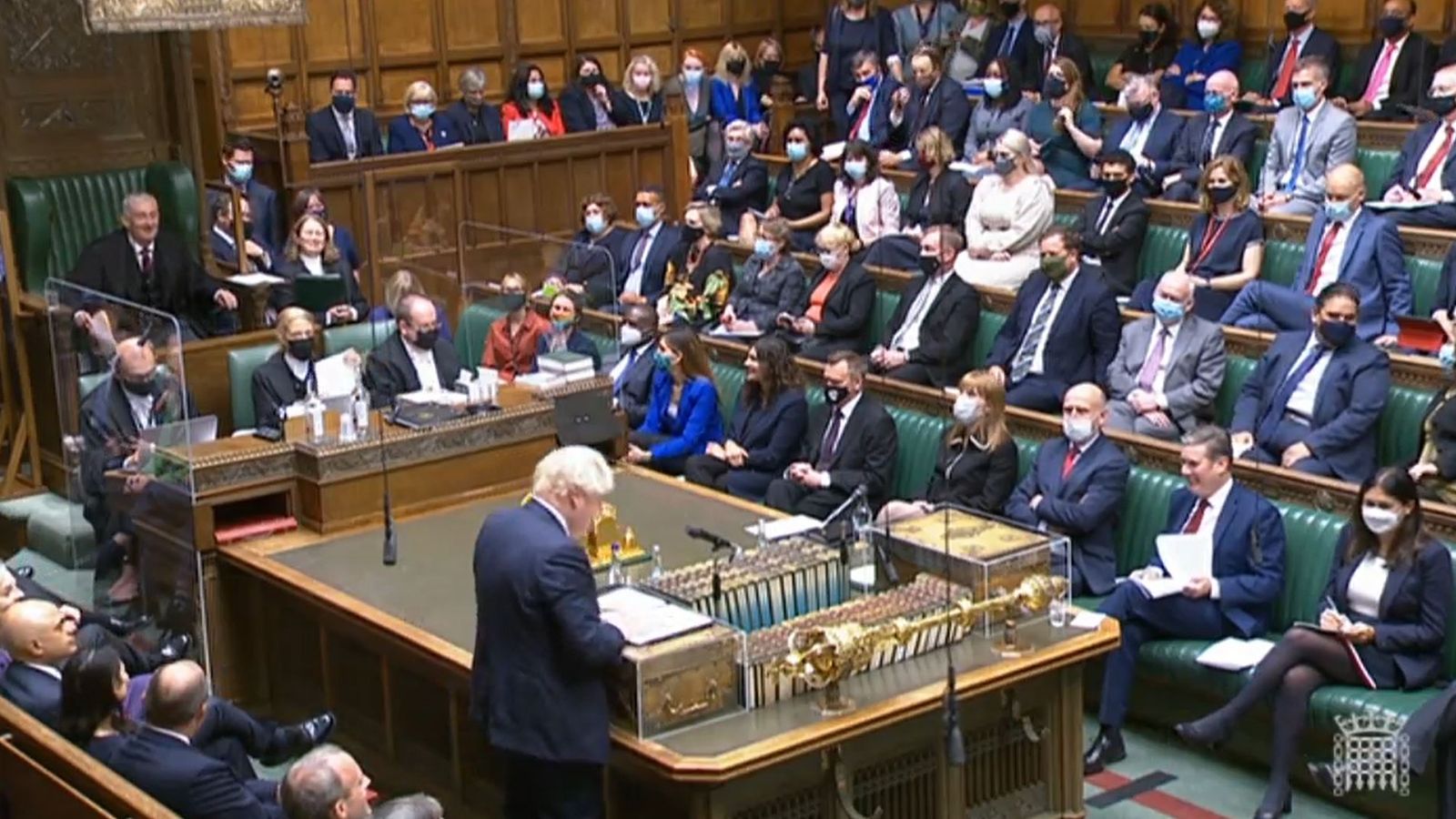 The House of Commons has seen packed benches for the first time since COVID gripped the UK – with different choices being made by MPs across the chamber on whether to wear a face mask.

With parliament recalled to discuss the crisis in Afghanistan, MPs sat shoulder-to-shoulder on both sides of the House.

Most on the Labour and opposition benches chose to opt for a face covering, but many Tories decided not to.

It was the first time since March 2020 that MPs were crammed into the House with no requirement to follow social distancing guidelines or to wear a mask.

The emergency debate was the first to be held under the post-COVID parliament rules where MPs had to attend in person in order to say something.

MPs are no longer able to dial into Commons proceedings via services such as Zoom, which became the norm during the height of the coronavirus pandemic.

Ahead of the debate, civil service and public sector union boss Dave Penman urged MPs to show their respect to parliamentary colleagues and staff by wearing face coverings.

On Twitter, the general secretary of the FDA civil service union called for MPs to “demonstrate you care”.

However, only a few MPs sitting on the benches behind Boris Johnson were seen wearing a mask as the prime minister opened the debate.

A plea to all MPs today: You have an opportunity to demonstrate you care about your fellow parliamentarians and Commons staff. The Speaker has strongly advised masks should be worn in the Chamber and the Govt’s general advice is to wear masks in enclosed spaces.

Last month Mr Javid was forced to issue an apology after he was widely criticised for saying people should no longer “cower” from the coronavirus.

International Trade Secretary Liz Truss, Defence Secretary Ben Wallace and Therese Coffey, the work and pensions secretary, were also among those sitting on the front bench not wearing a face mask.

Former health secretary Jeremy Hunt could be seen on the Conservative benches immediately behind Mr Johnson, but was mostly seen wearing a mask.

Ex-prime minister Theresa May was also at odds with many of the Tory MPs sitting around her as she donned a blue face covering, only removing it when she made an early contribution to the debate.

Ahead of making a contribution, some MPs and party leaders wearing a mask would remove the covering several minutes before speaking.

Speaker of the House Sir Lindsay Hoyle set out to MPs moments before the debate started how proceedings had returned to what was last experienced 17 months ago.

He said: “I wish to remind the House that the provisions which allow for the hybrid participation in the chamber are no longer in place.

“All contributions to proceedings will once again be made from within this chamber.”

Asked why a number of MPs were not wearing masks in the House of Commons, the prime minister’s official spokesman said it was a matter for the parliamentary authorities.

The spokesman said the advice “still remains” that face coverings should be worn in indoor crowded spaces.

But he added: “The arrangements for the House are a matter for the parliamentary authorities, as you know masks are not a mandatory requirement.”

Calls for emergency increase to Universal Credit as report finds some families £1,600 worse off
Deadlock with Russia over Nord Stream gas turbine is not our fault, Siemens Energy CEO says
All London children aged one to nine to be offered polio vaccine after more virus found in sewers
Ukraine war: The artillery slugging match for the south
Dates announced for Royal Mail strikes as workers call for ‘dignified, proper pay rise’