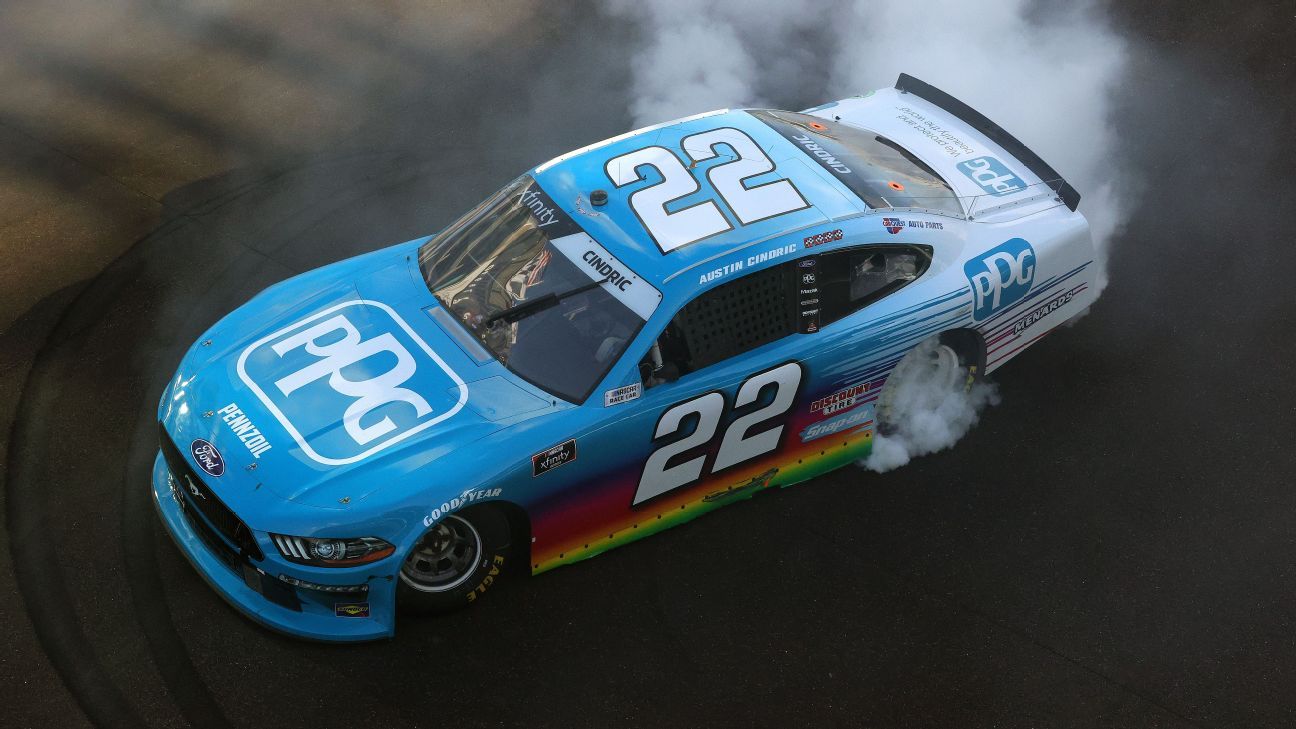 It proved to be the difference at Indianapolis.

Cindric took the lead to start the third stage of the NASCAR Xfinity Series race and pulled away for his series-leading fifth win of the the season. He beat Allmendinger by 2.108 seconds and the defending series champ gave Team Penske its second win of the day at the Brickyard. Haley finished third.

“I can’t even begin to put into words what it means to win at Indianapolis,” Cindric said after celebrating by singing “Back Home Again In Indiana” while crossing the yard of bricks. “It’s a racers dream, man. It’s not the win. It’s getting here, being able to compete and the guys here know what that means.”

Cindric dumped water on his father, Penske president Tim Cindric, before kissing the yard of bricks. The elder Cindric went to victory lane earlier Saturday, too, when Will Power won the IndyCar race.

The younger Cindric’s grandfather, Jim Trueman, also went to victory lane with Bobby Rahal in 1986. Trueman died 11 days later. His other grandfather, Carl Cindric, built high-performance racing engines. He died in March and Tim Cindric said he was thinking about both men as the race ended.

Austin Cindric now has a chance to give Penske a clean sweep of crossover weekend when Sunday’s Brickyard 200 is run on the 14-turn, 2.439-mile road course. It’s scheduled to be his final Cup start of the season before he moves into Penske’s No. 2 Ford full-time next season.

As usual, it wasn’t easy for the points leader.

By qualifying second, like Power, he avoided getting involved in the chaotic first-lap start that sent multiple cars spinning and colliding through those turns. The front end of two cars actually went airborne before landing safely on the track.

Track officials were seen inspecting the “turtles” following the race though Cindric had no complaints.

“I think they did a great job with the track,” he said. “I thought it was pretty self-policing and I think that’s what they were aiming for.”

Still, drivers aggressively tapped and banged their way through the field as they attempted to pass, leaving cars discolored and damaged. Two cars even slid into the infield tire barrier though neither driver was seriously injured.

But after watching Haley beat Riley Herbst to win the first stage and Allmendinger take the second stage under caution by finishing ahead of Haley and Noah Gragson, Cindric made his move by pitting before the stage ended.

“Honestly, they needed a better driver today. I messed up way too much early and got us off track,” Allmendinger said. “They went for the win and had confidence they could get out front.”

Cindric did — and picked up his 13th career Xfinity win.

“You’re proud of him but you also feel relief because you know how bad he wants it,” Tim Cindric said. “Not only to be part of Team Penske, it’s kind of fun to be part of the club, too.”

Race officials sent six cars to the back of the field for the start of the race — three for unapproved adjustments, two for missing driver introductions and one for an unapproved tire change. The affected drivers were Landon Cassill, Sam Mayer, Austin Dillon, Kyle Weatherman, J.J. Yeley and Ryan Sieg.

Chase Elliott was called in to relieve playoff contender Michael Annett, who is recovering from a leg injury. Elliott, the reigning Cup champion, finished fourth but didn’t earn any points toward the playoff. Annett fell to 13th in points with five races left before the 12-car playoff.

The Xfinity Series returns to oval racing next Saturday at Michigan International Speedway.

Ceasefire agreed as Israel and Palestinian Islamic Jihad come to a truce
ISRO Completes LEM Test Ahead of Gaganyaan Project, Launches SPARK Virtual Space Museum: Details
‘Something has changed’: Stelter on Trump and Fox relationship
Ethereum just pulled off its final test run ahead of one of the most important events in crypto
US attorney general says he personally approved FBI search of Trump’s Mar-a-Lago home