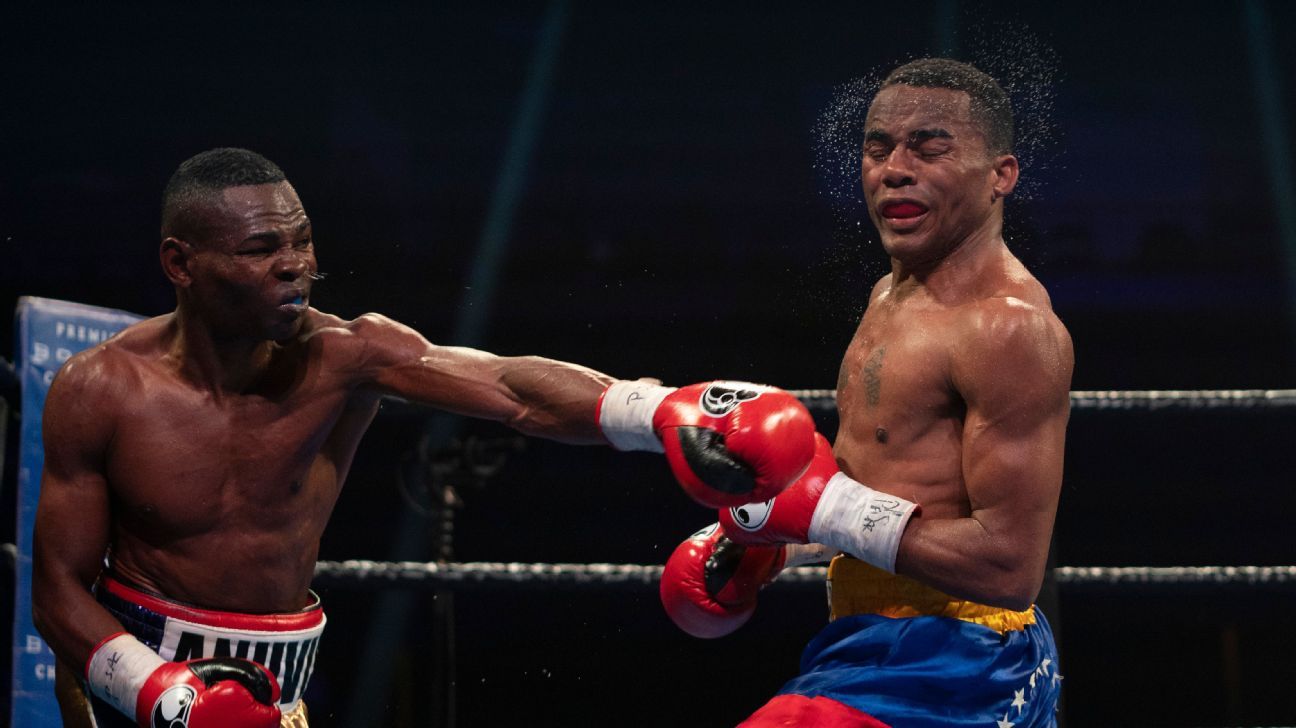 Guillermo Rigondeaux has heard it all before.

He’s boring. Unwatchable. The opposite of entertaining. The two-time Olympic gold medalist absorbed all the criticism even as he was boxing circles around his opponents. Nonito Donaire, then the reigning ESPN fighter of the year, was thoroughly outboxed by Rigondeaux in 2013. Despite his unbridled talent, the Cuban was panned by fans and even his then-promoter, Bob Arum, before Top Rank released him.

Now 40, Rigondeaux’s legs aren’t what they used to be. This version of “El Chacal” is far more stationary, and that sometimes means the kind of warfare that brings fans to their feet. His 2019 fight with former champion Julio Ceja was thrilling, a bout that Rigondeaux won by eighth-round TKO.

He moved from 122 pounds to 118 for his next, and most recent fight — a February 2020 decision over Liborio Solis. That bout was decidedly less entertaining, but Rigo still showed off his powerful left hand with a seventh-round knockdown.

Top Rank Boxing is on ESPN and ESPN+. Subscribe to ESPN+ to get exclusive boxing events, weigh-ins and more.

On Saturday, Rigondeaux (20-1, 13 KOs) will seek to become a two-division champion when he faces John Riel Casimero, his toughest opponent since he fought Vasiliy Lomachenko at 130 pounds. Casimero possesses tremendous power and the kind of reckless, free-swinging style that is guaranteed to produce fireworks.

The 118-pound title fight headlines a PBC on Showtime card in Carson, California, that promises to deliver the best entertainment value on a stacked Saturday that includes two other notable boxing shows. It’s not lost on Rigondeaux that his former promoter will be staging an event in Tulsa, Oklahoma, on that same night headlined by the trilogy between 115-pounders Joshua Franco and Andrew Moloney.

“Of course, it gives me joy that people are going to be watching my fight over [Top Rank’s] fight,” Rigondeaux told ESPN through a translator. “I don’t know what [Arum] has against me, I don’t know why he hates me. I’m just going to go out there, do my job and give fans a great fight.”

Elsewhere Saturday, budding welterweight star Vergil Ortiz Jr. will step up once again when he fights Egidijus Kavaliauskas in Frisco, Texas, on DAZN.

With so much boxing to choose from, here’s how I’m ranking the main events in terms of both entertainment value and significance.

Why you should watch: The bantamweight title fight is the most even matchup of the three main events on paper, and by far the most compelling. Casimero (30-4, 21 KOs) has been riding high, with back-to-back stoppages over solid foes. The 31-year-old scored a blistering third-round TKO of Zolani Tete to win the title in November 2019 and then stopped the undefeated Duke Micah in the same round one year later.

On Saturday Casimero will face his toughest test yet. Rigondeaux is a brilliant defensive fighter who will look to pick off Casimero’s incoming shots before delivering his own power punches. This classic stylistic matchup is a recipe for an action fight: a hard-charging, fearless puncher against a composed counter-puncher. Rigondeaux also packs plenty of pop, especially now that he’s at 118 pounds. Both of these fighters are on the precipice of a title shot with Rigondeaux ranked as ESPN’s No. 2 bantamweight and Casimero at No. 4.

Casimero-Rigondeaux was anticipated in the spring, but when Donaire reclaimed a 118-pound title with a knockout of Nordine Oubaali in May, PBC quickly moved to insert Donaire in Rigondeaux’s place. But the title unification between the two Filipino fighters fell apart after a squabble over drug testing, combined with personal insults from Casimero’s camp that Donaire found too disrespectful.

With Donaire out, Rigondeaux slid back in.

What’s at stake: The winner will be primed for a shot at Naoya Inoue, the No. 1 fighter at 118 pounds who holds two world titles in the division. There’s also the possibility of Donaire reentering the picture.

Inoue is one of the best pound-for-pound boxers in the sport and will be a favorite over either, but both Casimero and Rigondeaux would represent the Japanese star’s toughest task since he stopped Donaire in 2019.

For Rigondeaux, this is perhaps a final chance to call himself champion. At 40 years old, he isn’t just looking to once again claim that status, but do so in a second division after a long run at 122 pounds where he was often avoided by the “name” fighters.

Casimero finds himself in a far different spot in his career, but the stakes are equally high. If he can knock out Rigondeaux, he too will be looking at a big payday, as well as the potential of pound-for-pound status.

No. 2: Vergil Ortiz vs. Egidijus Kavaliauskas

Why you should watch: Kavaliauskas is yet another measuring stick for Ortiz, one of boxing’s best young talents. Kavaliauskas’ lone professional defeat came inside the distance against Terence Crawford, but he put up a spirited effort. He even scored a knockdown of Crawford that the referee incorrectly waved off.

This fight is about Ortiz, though. The 23-year-old appears to be the real deal, a pressure fighter with power in both hands. All of Ortiz’s fights have ended inside the distance, and as his level of competition has increased, the Dallas native has performed even better.

His March fight with former champion Maurice Hooker — by far his best opponent to date — ended with a seventh-round KO. The bout was thrilling as Ortiz (17-0, 17 KOs) absorbed plenty of power shots, too.

Ortiz is always on the front foot and hasn’t been in a bad fight yet. This fight against Kavaliauskas will be all-action, too, for as long as it lasts. And like Ortiz, Kavaliauskas packs plenty of power. He once was a decorated prospect himself, a feared puncher built up by Top Rank before some disappointing performances, including a controversial draw against Ray Robinson.

What’s at stake: For Ortiz, a chance to further cement himself as one of the best young fighters in the game. With another knockout, he could be lined up for a title shot in his next fight. If he struggles against Kavaliauskas, his legitimacy will be questioned.

The welterweight division is one of boxing’s best, and it’s also chock full of fresh talent ready to climb the ranks. Besides Ortiz, there’s Jaron Ennis, Eimantas Stanionis and Conor Benn. A few months ago, Ennis scored a TKO over Sergey Lipinets in his own step-up fight.

Now it’s Ortiz’s turn. Ortiz is ESPN’s No. 6 boxer at 147 pounds; Ennis is No. 8. A convincing win over a battle-tested opponent like Kavaliauskas would go a long way toward separating Ortiz from Ennis and the rest of the pack.

If Kavaliauskas (22-1-1, 18 KOs) wants to stave off long-term gatekeeper status, the 33-year-old will need to at least push Ortiz to the brink. If Kavaliauskas succumbs to Ortiz’s power and aggression without putting up a fight, he will be an afterthought at 147. He was released by Top Rank before linking up with Golden Boy, which also promotes Ortiz.

No. 3: Joshua Franco vs. Andrew Moloney

Why you should watch: You know what you’re getting with this fight. The first two battles between the pair provided back-and-forth action.

The third bout figures to be the best, too. San Antonio’s Franco (17-1-2, 8 KOs) earned a tight unanimous-decision victory in the first meeting in June 2020, scoring an 11th round knockdown. Moloney (21-1, 14 KOs) appeared to be in control in Round 2 of the November rematch, but the bout was abruptly halted when Franco’s eye immediately swelled shut following a Moloney punch.

The fight should have been ruled a TKO victory for Moloney, but instead it was deemed a no contest when the referee said the eye injury was the result of an accidental headbutt. After a 20+ minute replay process that ran far longer than the two rounds of action, the ruling was still upheld. It sent Arum, who promotes Moloney, into a rage in Las Vegas; Franco is promoted by Oscar De La Hoya.

It’s only right that the 115-pounders will meet one more time. With all the controversy surrounding the second bout, there has to be a definitive ending.

What’s at stake: The winner will be primed for a shot at one of the division’s big four — Roman “Chocolatito” Gonzalez, Juan Francisco Estrada, Kazuto Ioka and Srisaket Sor Rungvisai. All four boxers aren’t just the best at junior bantamweight — they’re four of the best pound-for-pound boxers in the world. A 115-pound bout that doesn’t feature any of the quartet is decidedly less compelling when considering what’s truly at stake.

Moloney, 30, and Franco, 25, would both be considerable underdogs against any of the big four, despite their own standing; Franco is rated No. 6 by ESPN with Moloney one slot behind him.

Franco-Moloney 2 was the chief-support bout to Crawford-Kell Brook on ESPN. This matchup surely fits better as a co-feature than a main event, but it will headline Top Rank’s card. There is, of course, a compelling storyline as Moloney looks to gain revenge after the way their last meeting ended. Also keep an eye on Andrew’s twin brother, Jason, who fights Joshua Greer on the undercard.