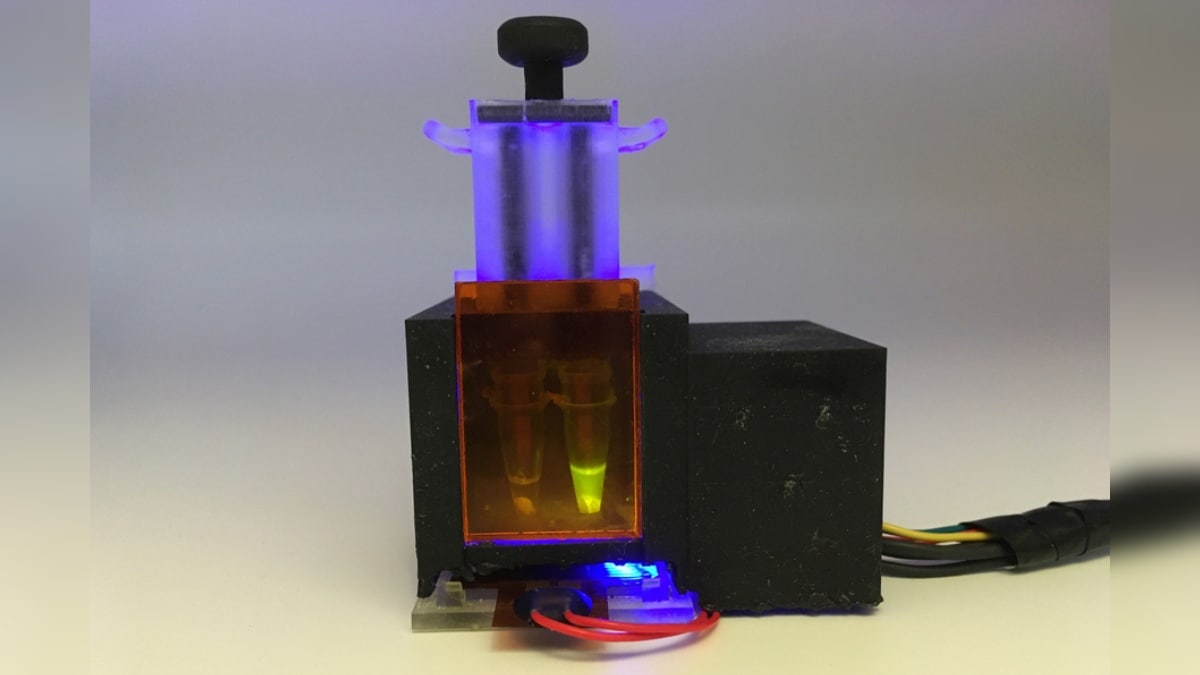 One of the biggest challenges at the beginning of the novel coronavirus pandemic was ensuring aggressive testing of vast populations in several countries across the world. With time, new testing techniques were developed to ease the process. And since the COVID-19 pandemic is very much still there, a team of engineers at MIT and Harvard University has designed a small device that can detect and report SARS-CoV-2 from a saliva sample within an hour. The study also demonstrates that the test is as accurate as a PCR test.

The research team says that the device can also detect mutations related to SARS-CoV-2 that several countries have already reported. And since the results are available within an hour, it makes it easier to track different variants. The entire system can be assembled at $15 (roughly Rs. 1,100), researchers said, adding that the cost is expected to come further down when the production is carried out on a large scale.

James Collins, the Termeer Professor of Medical Engineering and Science at MIT and a senior author of the study, told MIT News that the team demonstrated that the device can be programmed to discover new variants of COVID-19, adding they could also repurpose it quickly. As part of the study, the team targeted the SARS-CoV-2 variants reported in Brazil, South Africa, and the UK. “You could readily adapt the diagnostic platform to address the Delta variant and other ones that are emerging,” said Collins.

The team first experimented with the device with human saliva spiked with synthetic SARS-CoV-2 RNA sequences, followed by nearly 50 samples of patients, who had tested positive for coronavirus. Researchers discovered that the device was just as accurate as the PCR tests used widely across the world. The PCR tests, though, use nasal swabs and take more time.

This device, on the other hand, produces a fluorescent readout that anyone can see with the naked eye. Besides, the researchers have also designed a smartphone app that can read the results and send them to public health departments for easier tracking. They said that the device could be produced for as low as $2 to $3 (roughly Rs. 150 to Rs. 220).

The researchers added that if the US Food and Drug Administration (FDA) approves the production of these devices on a large scale, it could prove to be a breakthrough for areas without widespread access to PCR tests. Apart from that, those wanting to test themselves at home may also make use of the same.

Helena de Puig, a postdoctoral researcher at Harvard University’s Wyss Institute for Biologically Inspired Engineering and one of the lead authors of the study, said that the ability to detect and track these variants is crucial to effective public health. But, she added that variants are currently diagnosed only by nucleic acid sequencing at specialised epidemiological centres that are scarce even in resource-rich nations.

‘You can’t heat your home with hope’: Sunak unveils plan to slash energy bills for millions
Cloud stocks are rallying after a punishing start to the year as 2022 outlook brightens
Russian warplanes destroyed in Crimea airbase attack, satellite images show
‘She’ll be deeply missed’: Anne Heche’s family say they have ‘lost a bright light’ as they search for organ match after crash
Households massively underestimating how much energy bills will rise, with some thinking they will fall