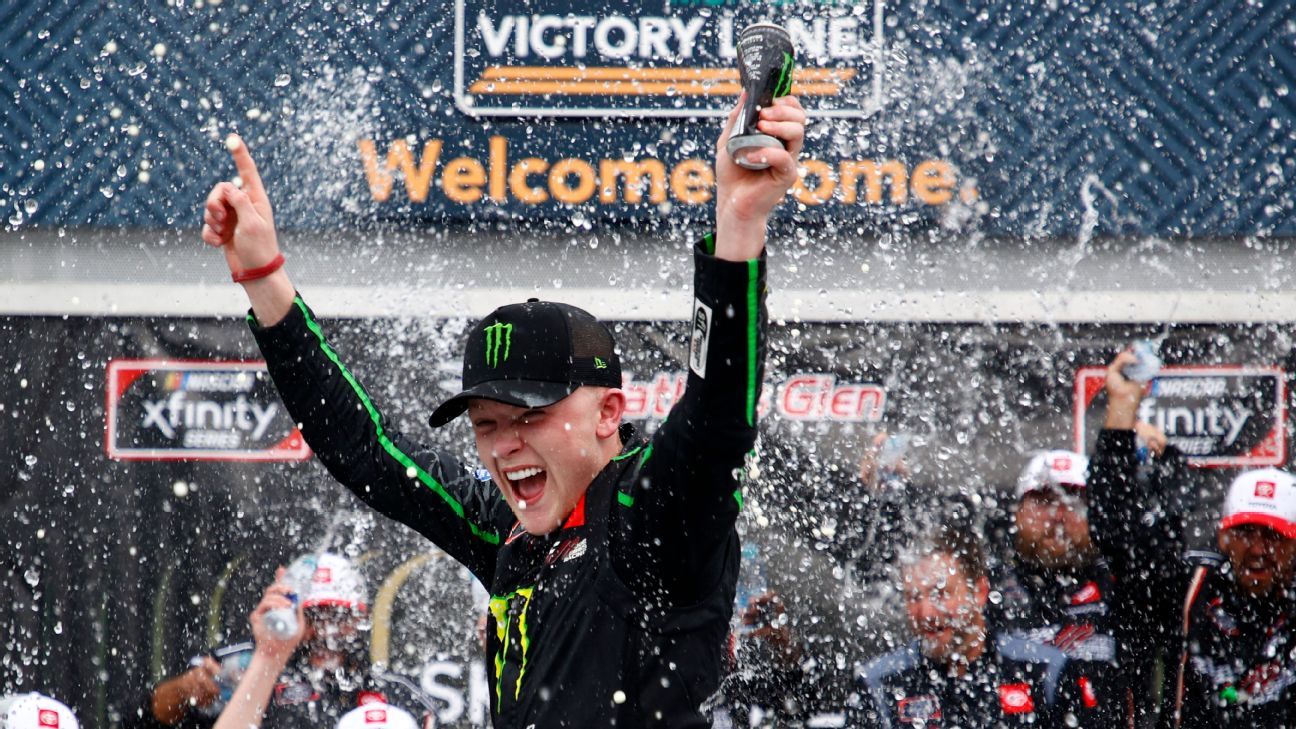 WATKINS GLEN, N.Y. — Ty Gibbs is only 18 and drives like a seasoned veteran — and it doesn’t get much better than this.

Beaten by road race ace AJ Allmendinger on a restart with four laps to go, Gibbs regrouped and passed him back to win the Xfinity race at Watkins Glen International on Saturday.

It was the third win in 10 Xfinity races this season for the grandson of team owner Joe Gibbs, and he prevailed over the top two drivers in the standings.

“It builds a fire in me and burns week after week when I don’t win,” Gibbs said. “But that’s what keeps me working hard during the week. Trying to compose yourself in front of the whole world at 17, 18, it’s hard for other kids my age to do it, Hopefully, I’m an example and a role model to kids that are younger than me that are coming up through the ranks and learn from me.”

Gibbs is a part-time rookie driver in the series this season, concentrating on the ARCA Series, which he leads by two points over Corey Heim.

It seems like just a matter of time before he makes a big jump.

“My guys worked so hard,” Gibbs said. “I’m just at a loss for words. I just feel like being in these situations helps you. Those guys [Allmendinger and Cindric] look so relaxed in those situations. Kind of just learning from them. This is just wonderful. I can’t believe it. It’s just a dream come true.”

Allmendinger, ranked second in the series, passed Gibbs going out of the first turn on the final restart, swinging wide left in the runoff area of the hard, 90-degree downhill right-hander and headed up through the esses. Gibbs gradually closed back in and drove his No. 54 Toyota past Allmendinger coming to the front straightaway with two laps to go on the 2.45-mile Watkins Glen layout and pulled away ever-so-slightly to the victory.

In the previous five races at The Glen, four finishes had a margin of victory under 1.6 seconds, and this one added another. The margin of victory was just over a half-second. The series did not race last year at Watkins Glen because of the pandemic.

“Ty did a fantastic job. He raced me clean,” Allmendinger said.

Two years ago, Cindric put on a show, beating Allmendinger in a stirring battle that lasted to the end for his first Xfinity win. This time it was the teenager’s turn to make a statement. Gibbs also won this year at Charlotte and on the road course at Daytona.

“I’m thankful where I’m at,” Gibbs said. “I’m not going to boast. I’m just going to keep my head down and keep working.”

Allmendinger and Gibbs were up front on a restart with five laps left in the second stage of the 82-lap race, and Allmendinger gained the lead roaring up through the esses. He prevailed — barely — in a side-by-side duel to the finish with Gibbs to take his sixth stage win of the season.

Cindric dominated the opening stage to win his eighth stage of the season.

Matt Mills brought out a caution on lap 49, a critical moment in the race, and pit road was crowded as crew chiefs pleaded with drivers to save fuel with the pit window pegged at lap 52.

Daniel Hemric, who stayed on track, took the lead on the restart with Gibbs charging hard, moving to third on Lap 52.

Told by his team that he was a half-lap short on fuel, late cautions took care of that worry for Gibbs. Erik Jones slid off course to bring out a caution with 13 laps to go, and both Gibbs and Cindric, operating in the same fuel window, stayed out.

On the restart, Cindric gained the lead from Gibbs with Allmendinger close behind. Gibbs challenged for the lead with a bump but couldn’t make the pass after the green flag waved.

Gibbs then regained the lead and Allmendinger slid past Cindric into second with 10 laps to go, but his edge of just over a second vanished when Kyle Weatherman’s No. 47 Chevrolet came to a stop in the esses to bring out the final caution.

Michael Annett was back in the No, 1 Chevrolet for JR Motorsports. He was medically cleared by NASCAR to return after successful surgery to repair a stress fracture in his right femur and the allotted recovery time. Annett, who finished 11th, has received a medical waiver from NASCAR so that he can retain his postseason eligibility.