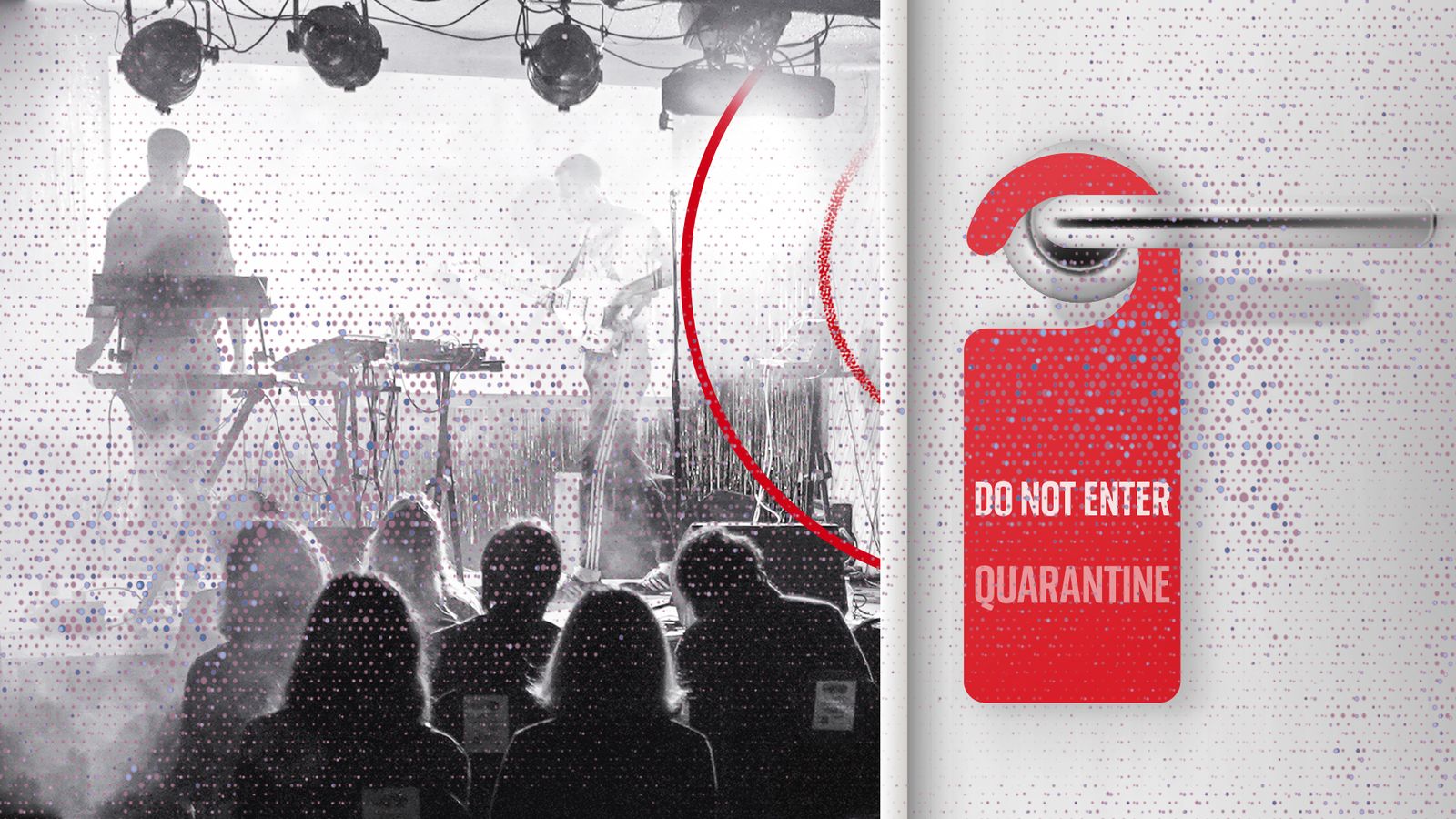 After spending 240 hours isolating alone in a room at a mid-range chain hotel in Manchester, Canadian singer-songwriter Devin Townsend has discovered, among other things, the good old British traditions of sticky toffee pudding (“really good”) and Naked Attraction (“yuck”).

The metal star is in the UK to headline next weekend’s Bloodstock Festival in Derbyshire. There’s no tour, just a warm-up gig beforehand, so he’s taken roughly a 9,000-mile round trip and more than two weeks out of his life to play his set and then… head straight back home to Vancouver.

Before the COVID-19 pandemic, this sort of thing was par for the course for musicians touring the world to play shows, performing in different countries night after night or hopping on a flight for a gig or two, often with large crews in tow. Now, things are slightly more complicated.

Are live gigs abroad worth it if you have to fly in early and spend several days all but locked up in a hotel room beforehand? For many performers, it is unsustainable. Of the festivals that are still going ahead this year, many in the UK have aimed in the main for British acts, to keep that side of things simple, at least. But there are some performers, like Townsend, who are able to put the time and miles in.

“The UK has been so supportive, it’s allowed me to do things I never thought I was able to do, so when an opportunity like this comes along I didn’t think about it much, to be honest,” says Townsend on Zoom – of course – from his hotel room. “I kind of was like, ‘okay, sure, that’s what we do’.” During his 10 days in hotel lockdown – due to end today – Townsend set up his room as a studio and continued to work. “Frankly, it’s life as usual to a certain degree.”

He also had to get to know, virtually, the band he’ll be playing with. He’s hired a group of British musicians and crew for the show, who he’ll meet for the first time just a few days before. “If I was in a crowd right now I wouldn’t recognise them,” he jokes. He’s sent them the music and watched videos of them performing. So far, so good.

“They’re playing it great and they’ve been very professional and proactive,” he says. “All things going as planned, it should actually be really cool. If it does work, then it acts as a litmus test for me to do this elsewhere. If that’s the case, I can continue to play music wherever and bypass some of the roadblocks that are being thrown up [by COVID-19 travel restrictions].”

Live music around the world ground to a halt in March 2020 and, in the UK at least, is only just making a tentative return. Interviews with artists in the last year or so have been filled with talk of the desperation to get back on stage again. But with rules on restrictions and travel changing all the time, and no international consensus governing isolation, meaning each country is different, it’s a challenge.

German metal band Kreator, also playing at Bloodstock, arrived in the UK on Tuesday ready for their isolation period. Frustratingly, the rules for people travelling in from the US and Europe were lifted the previous day, but with flights and hotel rooms paid for, they stuck with original plans. So they still spend the time here, although now they get to see the sites of the East Midlands and not just the inside of a hotel room.

Townsend spent his time in quarantine updating his 140,000 Twitter followers with Groundhog Day-style pictures of his hotel room. He also shared his Naked Attraction discovery. Five series in, most British TV viewers are now immune to the casual public reviewing of naked bodies, but to the unacquainted it must be an odd programme to stumble across.

“TV has a game show here with a bunch of gnarly naked humans adjudicating each other’s genitalia. Yuck,” Townsend tweeted. “There’s certain things about it that I found I appreciated, like they’re normal people,” he says. “I did appreciate that it’s kind of body positive in a certain way.”

Fortunately, Townsend has spent a lot of time in the UK, so Naked Attraction wasn’t his first introduction to British culture. And his hotel room is good – “hotelly” – he says. The time spent alone has also given him a chance to reflect.

“It’s been 18 months in what feels like an obstacle course at high speed, so stopping dead has been good but also psychologically a little weird,” he says. “I think there’s a certain amount of a psychological ramification of stopping after 18 months of just trying to pivot this career, trying to keep working, and kids and a life and ageing parents.” He pauses. It’s been “nuts” for everyone, he says.

“And I got here and they’re like, ‘okay, you need to go to your room and you need to stay there until you learnt your lesson’, or whatever the agenda was,” Townsend jokes. “Every now and then when you stop… it’s like a lot of low-level – and in some people’s case, high-level – trauma that when that momentum keeps going, there’s really not an opportunity to process it. Stopping brings it home. There’s been a couple of moments where it’s been like a tsunami, where you’re like, wow, this has been intense.”

Townsend is not the only musician who has sacrificed his time in order to perform away from home. Icelandic pianist Víkingur Ólafsson has spent 69 days since September 2020 in some form of isolation, whether at home or in hotel rooms around the world.

“More than two months,” he says. “What would usually be a one or two-day trip often became a seven-day trip or nine days or something like that. In the beginning it was quite luxurious almost because the airports were completely empty, you always had the seat row [on the plane] for yourself.” But empty airports soon began to evoke a “sort of end of the world feeling, apocalyptic in a certain sense, very ghostlike”.

Towards the end of 2020, Ólafsson quarantined for two weeks in Japan in order to play eight shows in December. Performing to 2,500 people in Tokyo in one night made it worth it, “just to remind myself what the world should be like”. Plus, he had an apartment, with a piano, which made it easier. Other times have been less plush.

“One psychological thing that’s very interesting is that when you have so much time in quarantine, you start to feel a bit like persona non grata in society,” he says. “You start to feel a little bit like poison, like you are not to be touched. Which is true, in a way.” Isolation at a hotel in Norway was strict. “I basically stayed in my room and I was allowed one walk a day. It’s interesting how your notion of freedom completely changes when you go through this again and again and again. The psychological impact is hard to describe.”

Meals were served three times a day. “It was a very nice hotel but they had a quarantine menu for us in the quarantine wing, and that was more like bad hospital food. They would knock on my door and leave the tray on the floor and I would open it and see them sort of running away.”

But staying at home, sticking to shows in Iceland until it all (hopefully) becomes a bit easier, was never an option. “It’s the will to survive,” says Ólafsson. “It’s my job, after all. It’s my income. And it is the love for music and the love to actually play music in this time when it’s not to be taken for granted.”

He makes sure he always has at least an electric keyboard – “with headphones, so I don’t bother my nextdoor guests” – available, so he can practice. “If you play piano on that level, you need to. Like athletics, you need to really keep yourself in shape.”

Apart from that, he has spent a lot of time on FaceTime with his family. “Strangely enough, your time somehow fills,” he says. “There was never an hour where I just stared at the ceiling laying on my bed.”

The musician has also had to quarantine at home upon returning from shows abroad, which presented its own challenges; not least keeping his presence a secret from his young son. “I had to be in one part of my house with my own bathroom and all this would be in isolation while listening to my family on the upper floor. My two-year-old boy would never understand, he would go crazy if he knew I was there.”

For other musicians, isolation has been a piece of cake; or, in stage veteran Merrill Osmond’s case, steak. The original lead singer of The Osmonds, flew in from LA and quarantined at a hotel in London ahead of a live-streamed gig he performed at the O2’s Indigo venue in June, and decided it made sense to stay the duration before a tour later in August.

“You’re talking to a guy that’s lived in a bus basically his whole life, in an aeroplane, and that’s been my life,” he says. “So being in a room for five days, for me, with a little bit of room service and a couple of good movies and a book, I was just fine.”

The UK is like a second home for the Osmonds, he says, and at 68, he’s seen “everything twice” when it comes to the tourist hotspots and interesting places to go. He’s happy having a rest, and “eating steak dinners”. With 15 grandchildren, like Ólafsson he’s also spent a lot of time on FaceTime. “And I’m still writing and I take the time and spend a good chunk of my day just coming up with new melodies and new song ideas.”

“Being an Osmond and spending my life on the road, I used to complain about not having any vacation time because I never really did. And now COVID comes and I’m having the greatest vacation anybody could ever ask for. If you look at it that way.”

Ultimately, says Townsend, you’ve got to “find a way to keep going”. Which for him, and probably all musicians and artists, means keeping creative.

“If there’s anything that this pandemic has made clear, it’s that a lot of the responsibility is on us, and making our own decisions and finding our own ways to navigate these things are yet another skill set, but one that’s almost of utmost importance.

“So good luck to you and anybody who’s [reading] this – and see you on the other side.”

For now, rules in the UK are lifting, and hopefully music artists can soon get back to performing around the world without the constraints of quarantine. Until then, they’ll always have room service and FaceTime – and Naked Attraction.