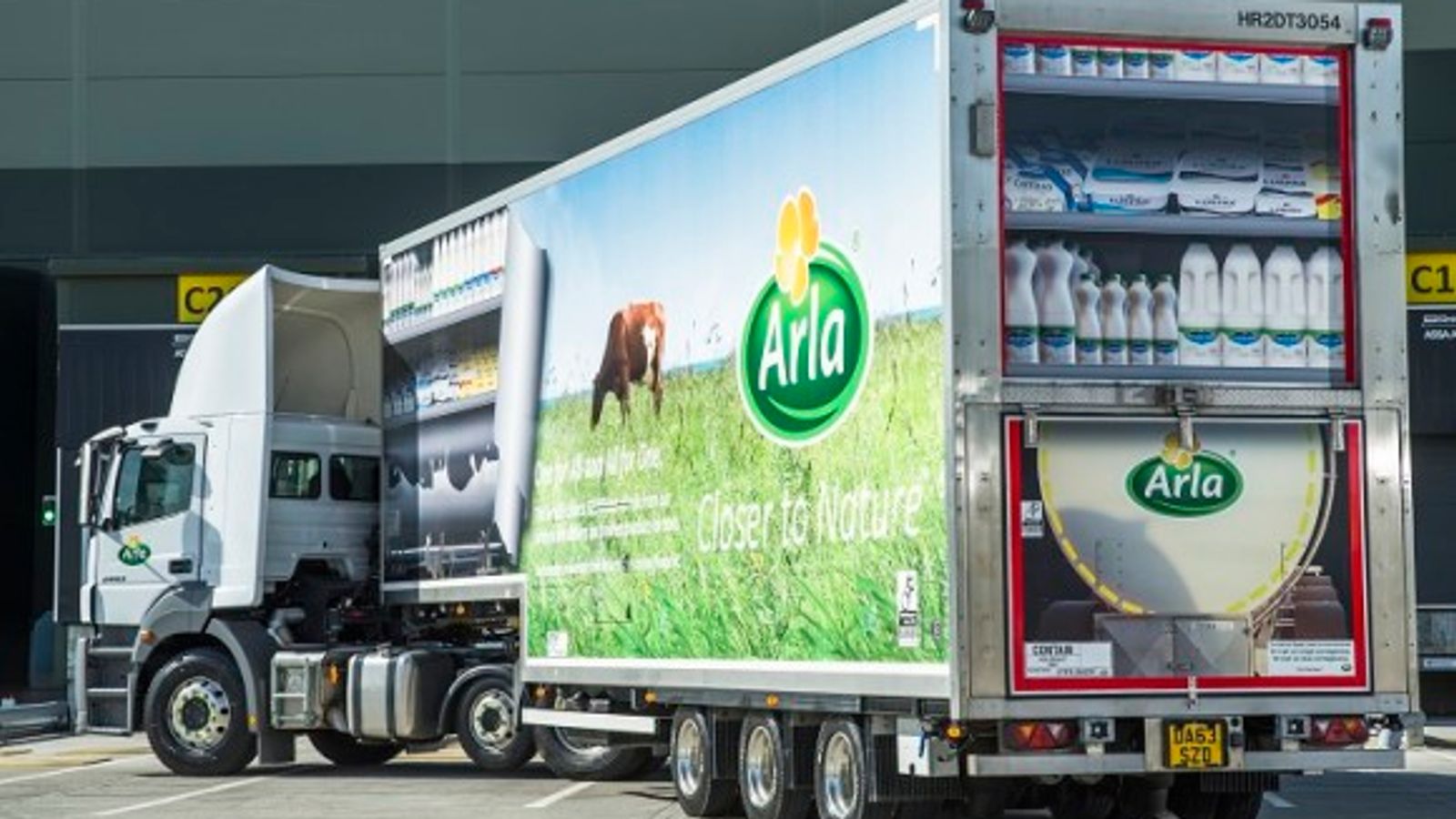 Up to a quarter of supermarket milk deliveries by the UK’s biggest dairy supplier have been unable to get through because of a shortage of lorry drivers.

Speaking to Sky News, managing director of Arla Foods UK Ash Amirahmadi warned of a “summer of disruption” unless bold action is taken by the government to tackle the industry-wide problem, blamed on the coronavirus crisis and Brexit.

The dairy giant, which supplies milk to about 2,400 stores each day in the UK, had on average failed to deliver to 10% of outlets due to a lack of drivers, although this had risen to a quarter – some 600 shops – at weekends.

“Of course that’s something that is a concern,” said Mr Amirahmadi.

As well as “significantly” increasing driver pay, Arla had also offered a £2,000 signing-on bonus, similar to other businesses, like Tesco.

In addition, the company was working with retailers to try and reduce the demand on the supply network.

But Mr Amirahmadi said: “Unfortunately, even with all those things in place we are still not able to make all of our deliveries.”

While a recent move to extend hauliers’ working hours by an hour would help, he added: “We don’t think that is the solution because it doesn’t sort the underlying issue, which is the shortage of drivers.”

Confirming the company was in discussions with the government, Mr Amirahmadi said: “We need to recognise it is a structural issue, that what we have at the moment is an acute driver shortage.

“Therefore, unless we take bold action on that we could be facing a summer disruption going into the next couple of months.”

Mr Amirahmadi highlighted the need to increase HGV driver testing and temporary visa changes, to deal with the shortage in the short-term.

In the longer term, Arla were committed to drawing on “homegrown talent” through its own training schemes, including apprenticeships.

Dr Judith Bryans, chief executive of the industry body Dairy UK, said: “The UK dairy supply chain has seen quite a bit of disruption as a result of on-going shortages of HGV drivers, causing difficulties for businesses in terms of transporting products.”

Earlier this month, Transport Secretary Grant Shapps announced a consultation to ease driver qualification requirements as part of a package of measures designed to tackle the issue, in addition to the temporary extension of lorry drivers’ working hours from nine to 10 hours a day.

However, the Road Haulage Association, which has said it believes there is a shortage of 100,000 drivers, described the relaxation as a “sticking plaster”.

A Department for Transport spokesman said: “We recently announced a package of measures to help tackle the HGV driver shortage, including plans to streamline the process for new drivers to gain their HGV licence and to increase the number of tests able to be conducted.

“We have also temporarily relaxed drivers’ hours rules to allow HGV drivers to make slightly longer journeys, but these must only be used where necessary and must not compromise driver safety.

“We have no plans to introduce a short-term visa for HGV drivers. Employers should invest in our domestic workforce instead of relying on labour from abroad.”

Girl, 15, dies and boy, 16, in hospital after stabbing – as teen arrested for murder
Labour pushes for 13,000 more neighbourhood police officers
Seven-time All-Star Rolen voted into baseball Hall
Chevron announces $75 billion stock buyback, dividend boost
Sunak’s integrity is taking a hit as he prolongs the pain over Zahawi – who will have to go