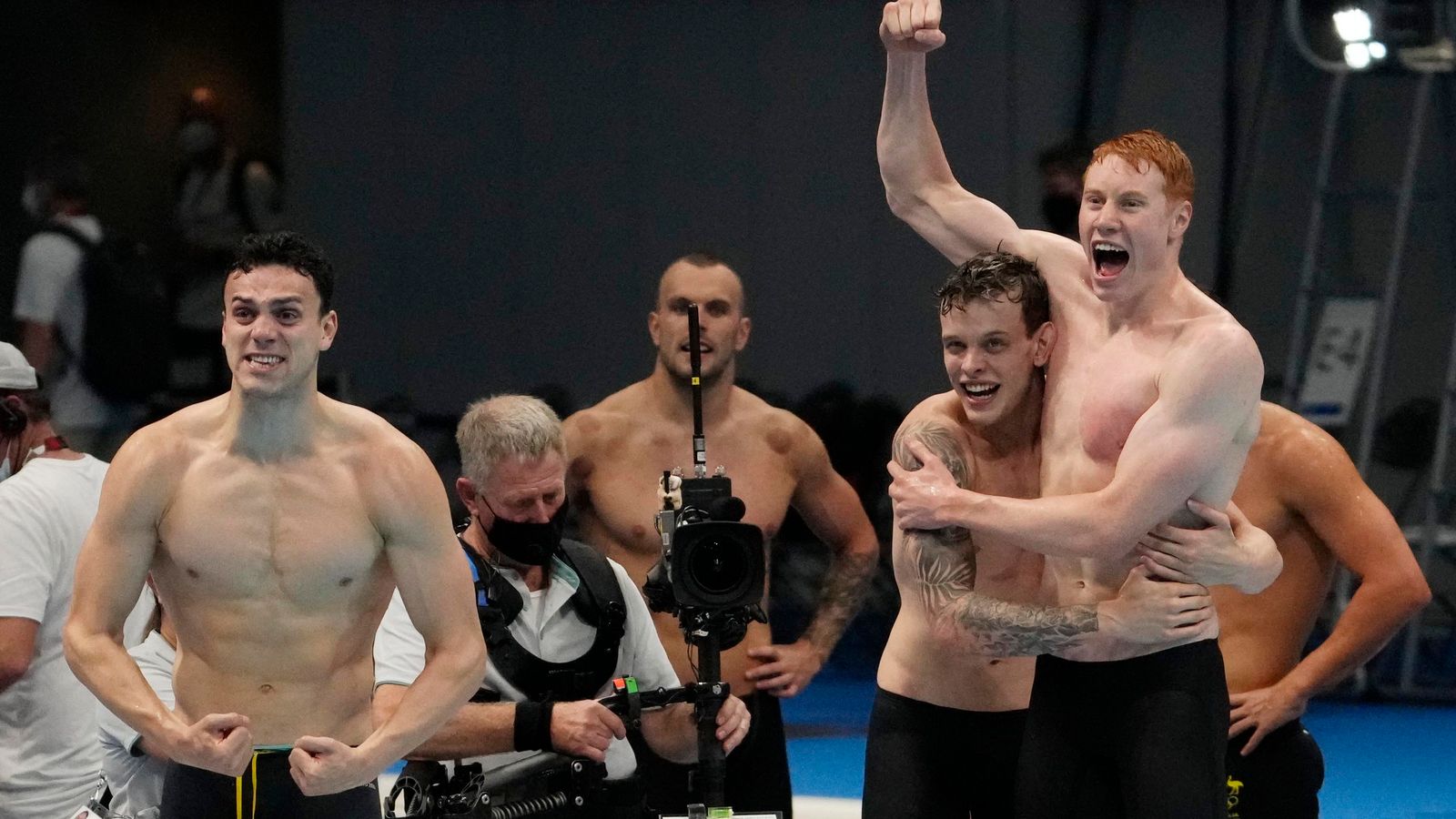 There has been more glory for Great Britain in the Tokyo Aquatics Centre, with gold in the men’s 200m freestyle relay.

Fresh off their one-two on Tuesday, Tom Dean led the way with Duncan Scott swimming the anchor leg.

James Guy and Matthew Richards completed the line-up – and the quartet finished 0.03 seconds off the world record.

Dean got Team GB off to a solid, if unspectacular, start, swimming just behind the United States before Guy closed the gap.

It was 18-year-old Richards’ leg that was the standout – with the teenager storming into the lead leaving Scott with what turned into the simple task of confirming the gold.

In the end, Team GB claimed an emphatic victory – 3.32 seconds clear of the Russian Olympic Committee in second.

The United States dropped to fourth after a good start, with Australia finishing third.

The victory means Dean is the first British male swimmer to win two golds at the same Olympic Games since 1908.

Earlier in the day, Abbie Wood just missed out on a medal in the 200m individual medley despite swimming a lifetime best, with Kate Douglas of the USA just beating her to the bronze medal.

James Wilby’s excellent Games continued as he qualified for the men’s 200m breaststroke as the second-best swimmer, but Ross Murdoch missed out on a place in the final.

It was a disappointing and frustrating morning on the Sea Forest Waterway for the British rowers, who finished fourth in three races.

Team GB had an outside medal chance in the men’s double sculls and women’s four, but they just missed out on the podium in both events – finishing fourth.

The biggest disappointment came in the third race – the men’s four cox – where Team GB were bidding for a sixth straight gold but missed out on a medal altogether.

Debutants Sholto Carnegie, Oliver Cook, Matthew Rossiter and Rory Gibbs tried to push eventual winners Australia all the way, but the Brits were chased down by Romania and Italy, with the Team GB boat almost crashing into Italy in the closing stages after swerving out of their lane.

Great Britain did get its first rowing medal at the Games, finishing second in the men’s quadruple sculls.

Going into the race, Team GB had an outside chance of a podium and were ranked as the fifth-best team.

But they held off Australia and Poland to take silver, behind the Netherlands – who won four rowing medals on day five of the Tokyo Olympics.

Jack Beaumont, 27, from Maidenhead, said: “It was wild out there. The conditions are rough, with a tailwind, but it’s what we’re used to back at home so we’ve trained in this so many times, it did not shake us.

“We decided that, as we were in lane one with an outside chance of a medal, we were going to take it to them and we really did it.”

Harry Leask, 25, from Edinburgh, added: “I knew basically the whole way where we were, I had a pretty good view from where I was sitting of the whole race.

There could be more medals in rowing, after Emily Craig and Imogen Grant qualified for the final in the lightweight women’s double sculls.

In the rugby sevens, Team GB were hoping to qualify for their second final in consecutive Games but were well beaten by New Zealand in the semi-final.

They will play Argentina in the bronze medal match at 8am.

Stormzy announced as latest performer for Brit Awards 2023
The deadly assault draws painful parallels for Americans who are no strangers to videos of police violence
Backstage With… Joe Cornish on his first TV project since The Adam And Joe Show
Aptera’s clever new community funding program prioritizes your SEV delivery the more you invest
Pereira-Adesanya, Masvidal-Burns set at UFC 287