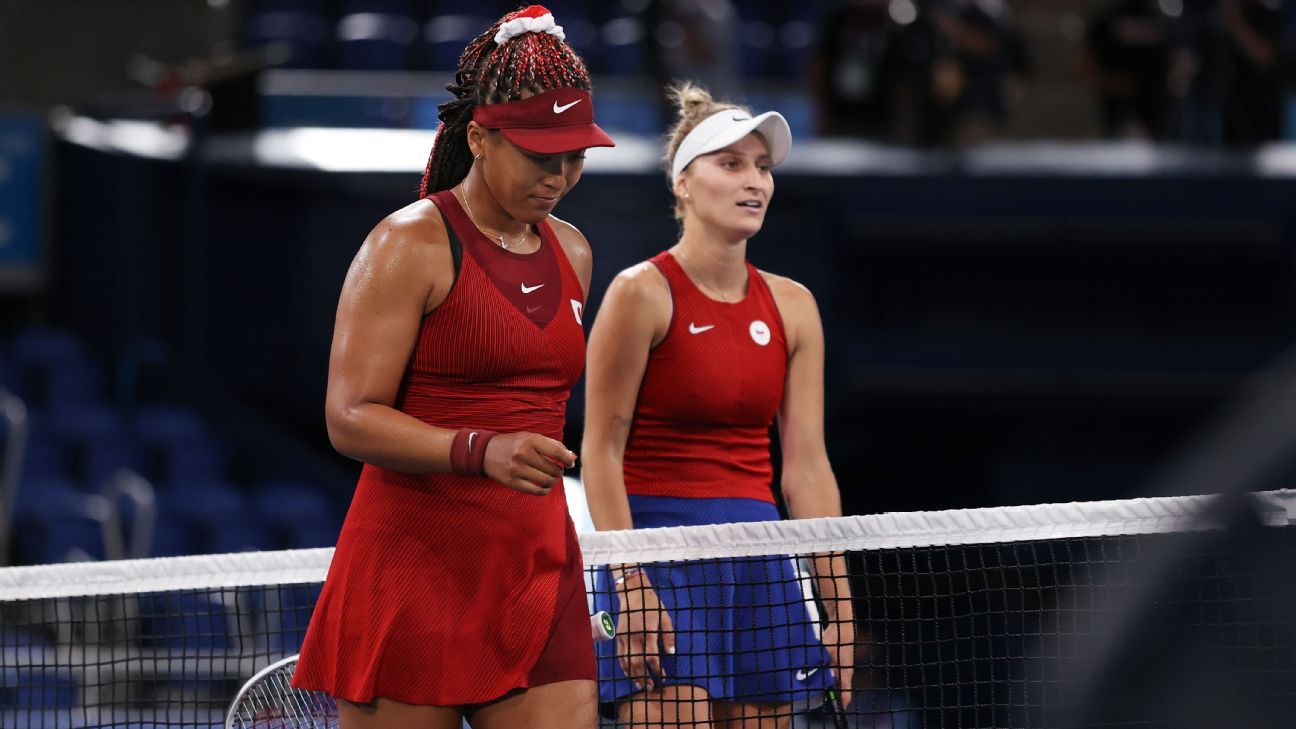 She lit the fire to start the Olympics, but Naomi Osaka‘s Tokyo 2020 dreams were extinguished far too soon on Tuesday in just over an hour by Marketa Vondrousova. With a flurry of unforced errors and growing frustration, Osaka’s Olympics ended with a 6-1, 6-4 loss to Vondrousova, ranked No. 42 in the world.

Osaka looked out of sorts throughout against Vondrousova, her serve failing to produce the goods (winning just 25 of 43 points on her first serve). She made 32 unforced errors compared to Vondrousova’s 10.

When asked afterward what went wrong, she responded: “Everything — if you watch the match then you would probably see. I feel like there’s a lot of things that I counted on that I couldn’t rely on today.”

It wasn’t meant to be like this for Osaka. Chosen to light the Olympic torch at the opening ceremony, Osaka was essentially the face of these Games, which were going to plan for the hosts, who were tied with the United States for most gold medals as a country.

Osaka took an eight-week break before the tournament and had looked so comfortable through the first two rounds with victories over Zheng Saisai and Viktorija Golubic, but then it unraveled on Tuesday as Typhoon Nepartak came hammering down on the roof of Ariake Tennis Court.

It has been a rollercoaster 2021 for the four-time Grand Slam champion. Having won the Australian Open in February, Osaka was the player to beat on the women’s tour. But when the French Open rolled around, she announced she was going to skip the tournament’s press conferences, citing her mental health.

After winning her first-round match at Roland Garros, she withdrew from the tournament and later decided not to participate at Wimbledon, focusing on bringing back the gold medal for Japan.

“I definitely feel like there was a lot of pressure for this,” Osaka said. “I think it’s maybe because I haven’t played in the Olympics before and for the first year (it) was a bit much. I think I’m glad with how I played, with taking that break that I had.”

It looked like it was all laid out perfectly for her when Ash Barty, the world No. 1, went out in the opening round of the Olympics, opening the door for Osaka to continue Japan’s gold medal run at its home Games.

By the time Osaka took the court on Tuesday, Japan was up to eight gold medals: two in skateboarding, four in judoka and one each in swimming and table tennis. Osaka dreamt of adding another.

A major upset on the tennis court.

But that dream did not come to fruition. She dropped the first set in 24 minutes, and though she staved off three match points in the second set, her backhand sailed wide, sending Vondrousova to the quarterfinals.

“How disappointed am I? I mean, I’m disappointed in every loss, but I feel like this one sucks more than the others. I do know that my expectations were a lot higher,” Osaka said. “I feel like my attitude wasn’t that great because I don’t really know how to cope with that pressure, so that’s the best that I could have done in this situation.”

Keep up with the Summer Games in Japan on ESPN: Read more »

Still, while the loss will surely hurt Osaka, she has already left a strong legacy off the court in her home country. The image of her lighting the torch was a symbol of hope for a country that has gone ahead and put on an Olympic Games amid the COVID-19 pandemic.

She has also made an impact in ending the stigma surrounding mental health. In her self-penned piece in TIME Magazine, which came out before the Games, she spoke of wanting to make Japan’s people “proud,” and that didn’t necessarily need to be accomplished with a medal.