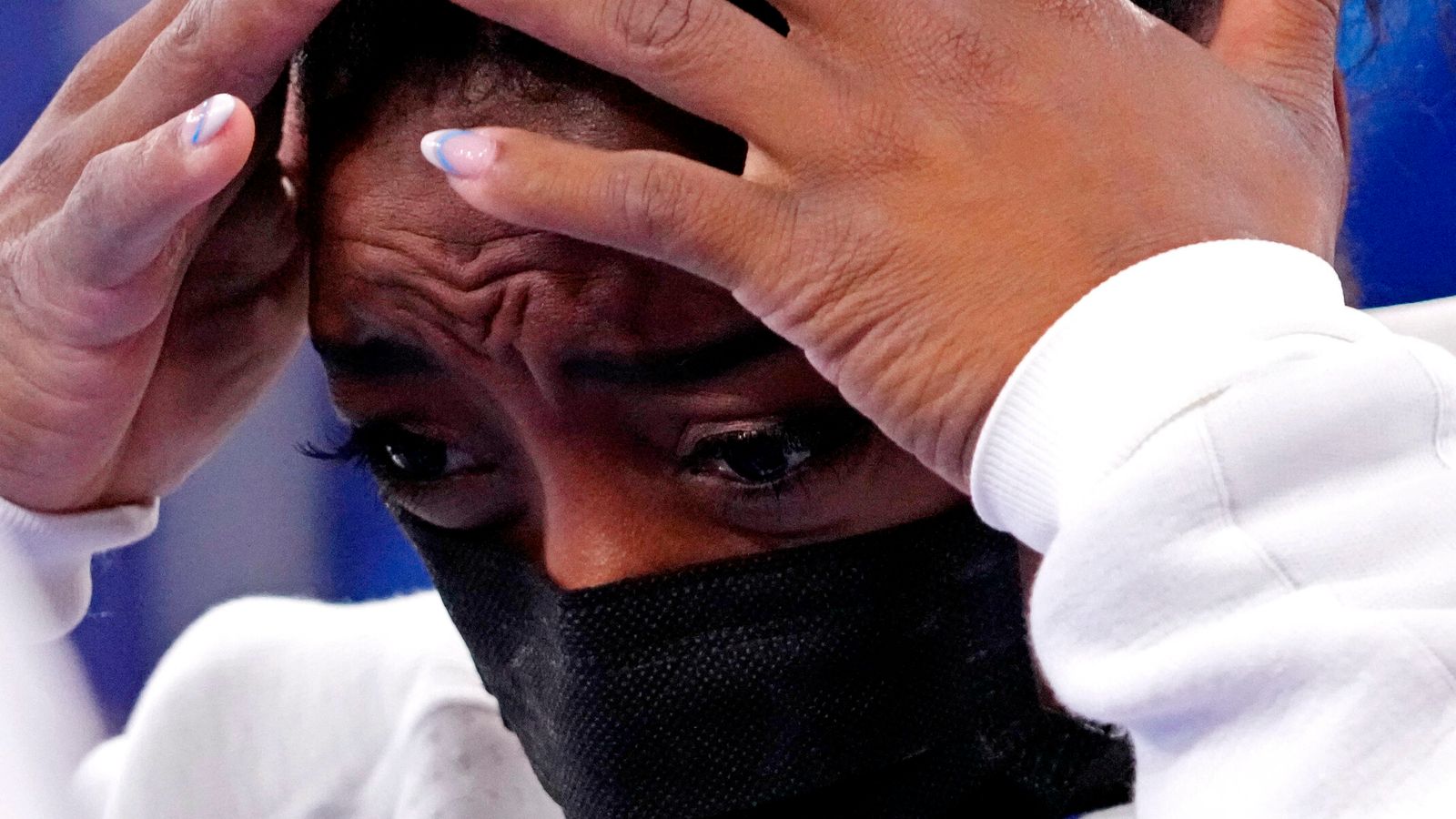 Simone Biles says mental health concerns were behind her shock withdrawal from the team gymnastics final at the Tokyo Olympics as she admitted: “I just didn’t want to go on”.

Biles, the US superstar who some consider the greatest female gymnast of all time, was bidding for six gold medals coming into the competition, but pulled out of her first final after a disappointing start.

Without her, the American team finished second behind the Russian Olympic Committee.

Initially the reason given by team bosses for her withdrawal was a “medical issue”.

But, speaking to reporters, Biles, who won four golds and a bronze in Rio 2016, said: “After the performance I did, I just didn’t want to go on.”

She wasn’t hurt, she said, but had suffered “just a little injury to my pride”.

“I have to focus on my mental health. I just think mental health is more prevalent in sports right now … we have to protect our minds and our bodies and not just go out and do what the world wants us to do.

“I don’t trust myself as much anymore … maybe it’s getting older. There were a couple of days when everybody tweets you and you feel the weight of the world.

“We’re not just athletes, we’re people at the end of the day and sometimes you just have to step back.”

Especially hard was the sense she was no longer doing gymnastics for herself, but for the rest of the world.

“It just sucks when you are fighting with your own head. You want to do it for yourself but you’re just too worried about what everybody else is going to say, think, the internet,” she said.

Her Olympics is far from over, with her next scheduled competition in the women’s all-around final in two days’ time. Apparatus competitions also remain.

“We’re going to see about Thursday,” she said, echoing the team’s statement that she “will be assessed daily to determine medical clearance for future competitions”.

Biles, who at one point choked back tears, added: “We’re going to take it a day at a time and see what happens. I’m just trying to gear up for the next test. I tried to go out there for the team and they stepped up to the plate.”

She admitted to feeling conflicted, adding: “It’s like fighting all those demons and coming out here. I have to put my pride aside. I have to do it for the team.

“And then at the end of the day, it’s like ‘you know what, I have to do what is right for me and focus on my mental health and not jeopardize my health and my well-being'”.

Biles kept open the possibility of still competing in Tokyo, but said she would take it a day at a time.

She admitted to regretting she won’t be able to have the chance of winning the six golds she was aiming for in Japan, which would have taken her personal tally to 10.

“It is very unfortunate that it has to happen at this stage because I definitely wanted these Olympics to go a little bit better. But again, take it one day at the time. We’ll see how the rest goes.”

The record-breaking American athlete had a rocky start in the final, where the US was looking to secure a third straight Olympic title.

The 24-year-old bailed on her planned Amanar vault, opting for an easier one in mid-air, and then struggled with the landing.

The rare misstep allowed the gymnasts from Russia to open up a one-point lead after the first rotation and they went on to win.

After huddling with her trainer, she left the competition floor with the team doctor before returning several minutes later with her right leg wrapped.

Team GB took a historic bronze after leap-frogging Italy on the last rotation.

Beyond the ‘balloon watch’ gimmicks this is an extremely serious moment
Nissan unveils convertible EV concept, a category it should’ve been producing a decade ago
Jury find Musk, Tesla not liable in securities fraud trial following ‘funding secured’ tweets
Thousands of ambulance workers in England to strike on 10 February over ongoing pay dispute
BMW in talks with UK government over £75m grant for electric Mini