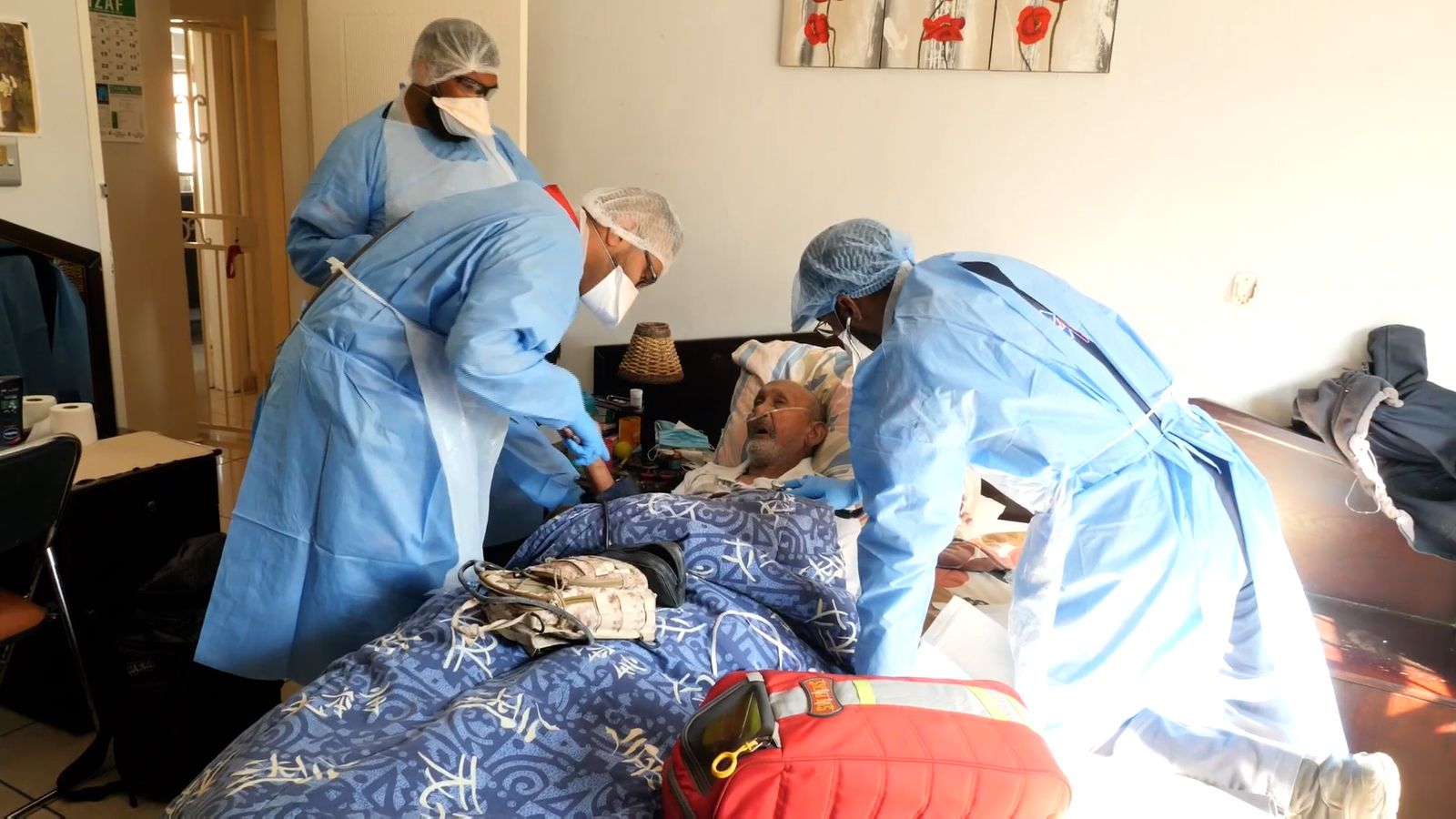 Dr Angelique Coetzee is a GP in the South African capital Pretoria, where she has run a family clinic for the past 33 years.

She said: “If you have never been in such a situation, you can’t imagine what it is like. We’ve been dealing with 30 or 40 positive cases every day. The pressure is extreme.

“If you look at a country like Australia where they have a few cases, well I would see their national caseload in a couple of days. Can you imagine?”

When we first spoke in June, Dr Coetzee seemed on the verge of tears.

She said: “If I speak to you now, that means someone with COVID will not been seen – and there is no point trying to message. I don’t have time to answer.”

South Africa has found itself in the grips of a Delta variant-driven “third wave” of infection.

The caseload has been brutal, outstripping the first two waves by a factor of three.

The country’s acting health minister says this surge has now peaked in the province of Gauteng, where the cities of Pretoria and Johannesburg are situated but Dr Coetzee says her personal and professional burden has barely changed.

She said: “We have been seeing fewer patients on a daily basis this week but the weather is colder and COVID-19 patients are turning up with pneumonia so we are seeing sicker patients than we have been during the last three or four weeks.”

South Africa’s beleaguered public-run health system has struggled to cope with wave after wave of the virus.

“This is the third wave we have experienced, comes less than six months (after the second) and the infrastructure can’t cope,” said Dr Coetzee.

“Most patients need oxygen and I try to admit them to hospital but because of (capacity) problems I have had to treat them at home. We have been waiting for 24 to 48 hours before we could get them cylinders, dealing with the stress of trying to manage patients without oxygen with the knowledge that if we don’t make a plan they are going to die. All this while the surgery is full, full, full. It is so very stressful.”

The extreme working patterns and the mental pressures that come with it have been felt in unexpected ways.

“I have had colleagues who have had motor vehicle accidents. One was so tired after work that he drove his car into a tree,” she said.

“The second one was hit at a crossroads – and a lady doctor reversed into a garage door because she had forgotten to open it. The most bizarre things that happen in a short space of time but it shows you the pressure they are under.”

Dr Coetzee has been operating on the very edge within a healthcare system that was been put under severe strain.

There are no support workers or home visits or specialist consultations for most people in South Africa.

Instead, GP’s like Dr Coetzee try to do it all.

“You become distant after a while but you try to carry on and on. I think that is the only way to survive it,” she said.

Yanga Booi is a 32-year-old nurse working at the intensive care unit at Thelle Mogoerane Regional Hospital in Vosloorus, on the outskirts of Johannesburg.

He says the hospital is poorly equipped and the staff have been insufficiently prepared during the pandemic.

He said: “The health system in South Africa did a complete spin when the pandemic hit our shores. We were put in the spotlight and given this false sense of heroism, but it wasn’t the right sort of attention because when we went to work, the hospital was in a worse state that than it was before.

“We were ill-prepared from the beginning, and we are still not prepared.”

The hospital in Vosloorus provides beds and treatment but Booi says COVID testing at the facility is not reliable and patients are not properly isolated.

“We cannot be sure who has COVID because we get so many false negatives. It’s like we wait for people to get sick or drop dead, then look into the COVID thing,” he said.

“I remember admitting a patient who was negative on admission and so we didn’t isolate him. A few days later he died and we found out that he was positive.

“It’s a sad situation because the hospital does not have an isolated ICU ward for COVID patients. It’s a general ICU with isolation rooms and we admit COVID patients to it – some people have it and others don’t. We cannot be sure.”

Mr Booi says dozens of his colleagues have paid a terrible price over the course of three separate waves of infection in South Africa.

He said: “It is unfortunate that we have had to watch our colleagues dying from this… countless members of staff have gone, it’s not just nurses, it’s the doctors, it’s the clerks, it’s the porters.”

The 32-year old, who took up the profession when he was offered a government bursary, says he was “deeply afraid” when the pandemic arrived.

Yet 17 months later he has noticed a change in himself and others.

He said: “The loss of life has caused us to grow a thick skin, just like when we came into the profession. Our first experiences with death were terrifying but then we got accustomed to people dying and that is what has happened with COVID.

“We are used to the virus we know it is here to stay and we must find ways to keep going.”

Dr Shabir Mahdi is dean of the faculty of health sciences at Witwatersrand University in Johannesburg and is a source of expertise and fearless criticism in a country that has struggled in all aspects of its pandemic response.

He said: “The current resurgence far exceeds what we have experienced either in the first or second wave in the number of documented cases. In fact, the numbers of new cases diagnosed on a daily basis is three times what it was at the time of the peak of the first and second wave.”

However, this eminent viriologist is unsparing in his criticism of the government’s response.

While the magnitude of the Delta-fuelled third instalment could not have been predicted, he says health officials knew another wave was coming at the beginning of South Africa’s winter season.

He said: “In a province like Gauteng where 25% of the population live, our hospitals are completely overwhelmed but at the same time, we have beds that are literally vacant in the same hospitals and we can’t actually use those beds because some official in some government department forgot that you actually need to have health care workers available to actually staff those beds.”

Microsoft’s $69bn takeover of Activision a step closer to being blocked by UK watchdog
When the roar of heavy diggers stops, the sound of silence that no one wants to hear
Harry Styles wins Grammys’ biggest prize – as Beyonce makes history
Jury find Musk, Tesla not liable in securities fraud trial following ‘funding secured’ tweets
Liz Truss rules out future PM bid but ‘doesn’t regret’ her short time in No 10