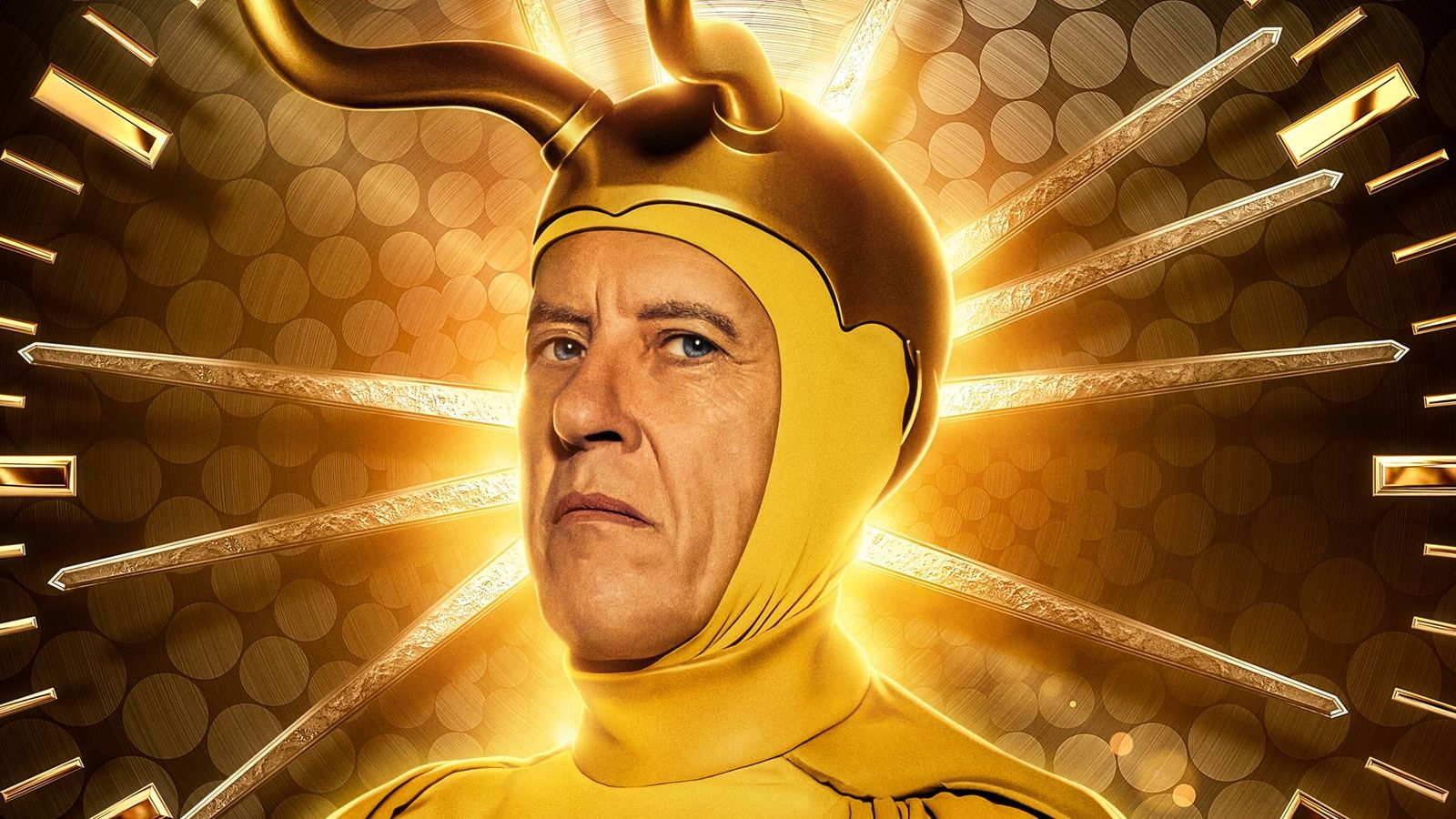 A few days after delighting fans with behind-the-scenes pictures of his costume for Loki, Richard E Grant is sitting in front of me on a video call to tell me all about his cameo role – although this time there are sadly no green tights or “baggy, yellow Y-fronts”, as he puts it, in sight.

But first, it’s the day after the Euro 2020 final when we speak, and there’s only one thing anyone is talking about. “Heartbreaking,” says the actor, of England losing to Italy on penalties.

Grant, a West Ham fan, reflects on the cruel nature of spot kicks deciding the outcome. He thinks there must be a better way. “I would rather they played three more hours than resort to penalties,” he says. “What do you feel?”

Unfailingly friendly and polite, Richard E Grant likes to ask his own questions back. Whether it’s football, favourite Marvel characters (Spider-Man) or the government’s handling of the COVID-19 pandemic (not impressed), the answer is usually followed by a variation of: “And what about you?”

We’re here to talk about Loki, the six-part TV series spin-off featuring the mercurial God of Mischief Loki, played by Tom Hiddleston, with the character stepping out of his brother Thor’s shadow following the events of Avengers: Endgame.

Grant’s debut as Classic Loki, an older Loki variant, came in the penultimate episode of the series, which aired earlier in July. With so many Marvel films and spin-offs, did the British actor have to do much homework before signing up?

“Well, the advantage is that Tom Hiddleston is literally a walking, talking Wikipedia, Loki-centric guru, fundi, whatever you call it, of all things Loki and Norse legends,” says Grant. “So when in doubt, if there was anything that I was curious about or didn’t know about, you just ask Tom and he could explain everything with enormous eloquence and passion and detail.

“And even though he’s played this role for over a decade, his commitment to it is absolutely off the chart. I’ve never, never come across anything like it. There’s certainly nothing exhausted about him or thinking, ‘oh I’m going to phone this in, I’m doing Loki again’. He is as enthusiastic and passionate about doing it as he was the first time he ever played the part.”

Grant says because of his “long face and V-shaped hairline” similar to Loki’s, he and Hiddleston had joked about him playing his father in the past.

“Not that you see it once I’m in the helmet and the headgear,” he says of his hair. “But every time I’d seen Tom socially down the last decade, we’d joked about playing father and son in something. So the fact that I ended up being an old, classic version of Loki to his Loki seemed serendipitous at some level. I was glad that’s how it worked out.”

One thing he was disappointed with was Classic Loki’s lack of muscles; Grant had been hoping to be transformed into a hulking superhero. “I was absolutely gutted that I didn’t have all the muscles that the [comic book artist] Jack Kirby drawings of Classi Loki had, and I absolutely assumed that… I would have a full Marvel muscle suit to step into, having been born without any.

“And the costume designer and the director, Kate Herron, said, no, no, no, you’re just going to be as you are. And I said, but look, how can I possibly fight when I’m like an old string bean? And they said, no, no, don’t worry about that. So I had to in my head say, well, old, withered Loki is going to be trying to fight off all forces of evil. But I would love to have had the muscles.”

In June, the series made headlines when it was revealed that Loki is bisexual and gender-fluid, something of a first for Marvel. “From the moment I joined @LokiOfficial it was very important to me, and my goal, to acknowledge Loki was bisexual,” director Kate Herron tweeted at the time. “It is a part of who he is and who I am too. I know this is a small step but I’m happy, and heart is so full, to say that this is now Canon in #mcu #Loki.”

Grant says it was an important step. “I think that because there are so many Loki variants and at this particular moment in the zeitgeist of where we’re living, people feeling disenfranchised or marginalised being included and seen and acknowledged is something that is so… profoundly in all humans that I’ve ever come across, that Loki being gender-fluid, it fits the moment in which we’re living, if that makes sense.

“I think that anything that promotes tolerance, inclusivity, is something that is hugely worth championing and celebrating.”

The actor says he was struck by Loki not just being God of Mischief, but of outcasts, too. “I think that that keyed me into the loneliness of somebody that’s… as much as you’d like to think you could live forever and the fantasy that we would live eternally, the reality is that you would be very lonely, and the need for human connection is so strong in us that that’s… [Loki] longs to see a family member and as a result is caught by the TVA (Time Variance Authority), in the story, so I completely identify with that.”

Grant’s appearance in the Marvel series comes off the back of something of a late blooming for his acting career, with a role in Star Wars: The Rise Of Skywalker in 2019 and his first Oscar nomination coming earlier that year, for his supporting role in Can You Ever Forgive Me? alongside Melissa McCarthy, after more than 30 years in showbiz. (None of this topped meeting his hero Barbra Streisand, though). Later this year, the 64-year-old will be seen playing drag queen Loco Chanelle in the film version of the award-winning musical, Everybody’s Talking About Jamie.

Grant, whose character in Can You Ever Forgive Me? was also gay, is aware of the current debate about whether straight actors should play gay roles, and says it is an issue he has discussed. “I’d just come off an award season for… God, what’s it called, the film with Melissa McCarthy that I did, called…” Just that film he was Oscar nominated for. “Can You Forgive Me? Yeah. In which there had been this ongoing conversation at that point two years ago about whether heterosexual actors could play… whether you were denying gay actors the opportunity to do that.

“So it was a thing that I brought up with [Everybody’s Talking About Jamie director] Jonathan Butterell time and again, and he said, I have chosen you, as a gay director and co-writer of the story, to play this part and you have to trust me that all of us are behind you doing this. So I thought, well, if they if they’re determined to do that, I’m not going to miss this opportunity to do it. And it was a very, very challenging and entertaining thing to do and I had an amazing team of people that helped me do all of it.”

Grant goes on to compare his Loco Chanelle costume with his Classic Loki ensemble. “What nobody tells you is that when you are in full drag, you can’t go to the loo at all for about 12 hours, so you drink a tiny amount through a straw. Whereas on Loki at least those sort of baggy, yellow Y fronts could be removed fairly fast, with a couple of snaps underneath.”

And if Grant were able to take on the powers of God of Mischief in real life, what would he get up to?

“I think the first thing I would have done is, as we are an island, and when COVID was announced in March last year, I think that I would have closed the airports and the ports – just for starters – like Australia and Japan and Taiwan and all the other islands, New Zealand,” he says. “I think that would have been my first thing.”

It’s fair to say he’s not a fan of the way the pandemic has been handled then? “I think that’s very fair to say. What do you think?” I think closing the borders and trying to handle the pandemic better sounds like a very sensible use of his powers, but not very mischievous.

“Yes,” Grant replies. “But if I had to say who the mischief was going to be landed upon, I would be in political deep water instantaneously!”

Loki is out now on Disney+

Westminster’s ‘nepo babies’ are here to stay – whether we like it or not | Adam Boulton
NHL Awards Watch: Who’s leading for Hart, Norris, Calder?
Sunak sets out yet more priorities with reshuffle – the public will wait to see what’s delivered
Inside the ‘Wormhole,’ Relativity Space’s monster factory 3D-printing reusable rockets
Greg Hands replaces Zahawi as Conservative Party chairman in Sunak’s first reshuffle