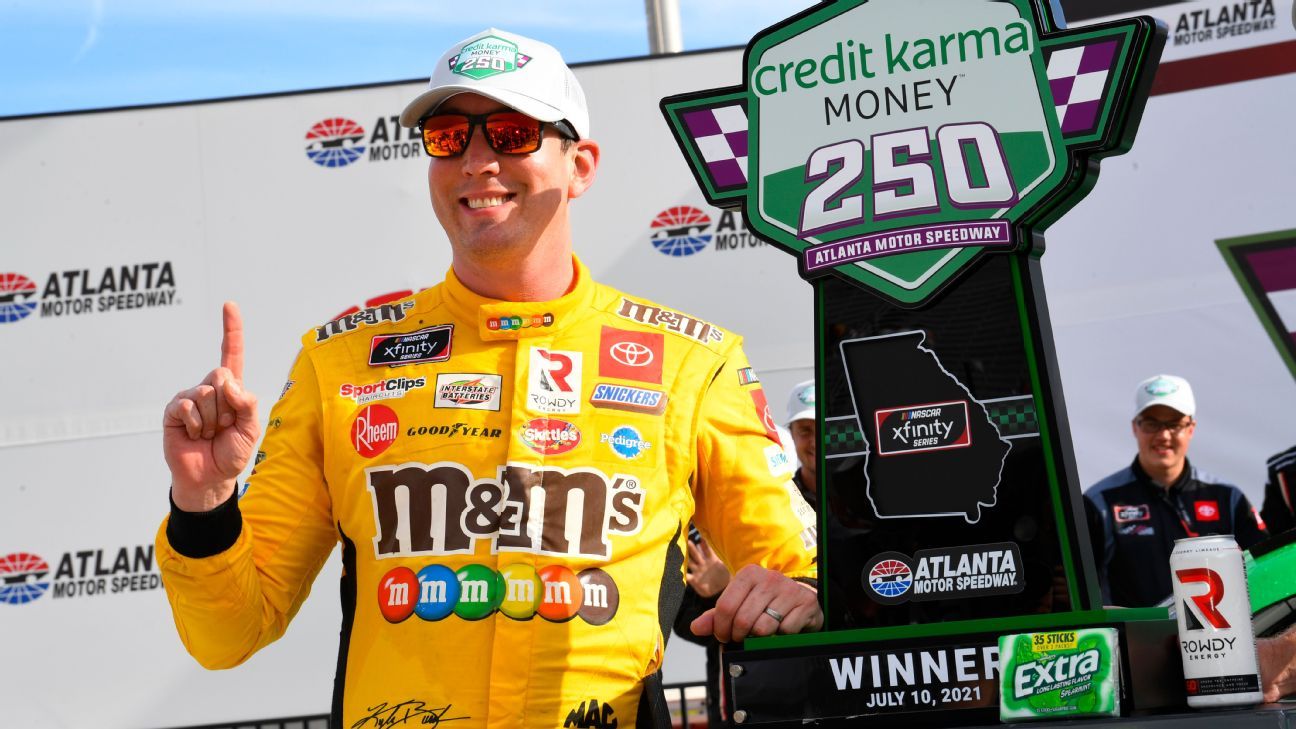 HAMPTON, Ga. — Kyle Busch completed a 5-for-5 sweep of what might be his final season in the Xfinity Series with a late recovery at Atlanta Motor Speedway on Saturday.

Busch finished 0.550 seconds ahead of Jeb Burton for his 102nd Xfinity victory and 222nd overall in NASCAR’s three national series.

Busch took the lead after pushing Daniel Hemric on a restart with six laps remaining. Busch appeared to be trying to give Hemric, his Joe Gibbs Racing teammate, a helpful push on the restart but instead Hemric lost control and hit the wall.

“I just wanted to hit him forward and straight but turned him sideways a little bit,” Busch said, adding the incident made the victory “a little somber.”

Busch has hinted that this might be his final season in Xfinity. He repeated that plan Saturday, saying he didn’t plan to return to Xfinity “as far as what’s going to happen right now.”

Busch added “Never say never, but this is it.”

Busch won the first two stages in Atlanta before needing to reclaim the lead following a final restart.

One week after Hemric had a runner-up finish to Busch, he was on the verge of his first career win before spinning on a restart when pushed by Busch with six laps remaining.

Hemric took the lead on the final stage after Busch won the first two stages.

NASCAR only allows Cup Series drivers, including Busch, to compete in five Xfinity and five Truck Series races each year. Atlanta was Busch’s fifth and final Xfinity event — and fifth win — of 2021.

Before the race, Busch tweeted “Let’s go out w one more.” It appeared to be another sign he doesn’t intend to return to the Xfinity Series next season.

Busch raced as if determined to make sure he departed Xfinity on top. He raced to the lead from start, led every lap of the first stage and also won the second stage after briefly falling behind Gragson.

With 17 laps remaining, Carson Ware’s crash into the wall caused a caution, sending leaders to the pits. On the restart with 11 laps remaining, there was another crash when Kyle Weatherman appeared to lose power and fell back quickly from the lead pack.

Busch will start second, behind Chase Elliott, in Sunday’s NASCAR Cup Series event, the final race before the Atlanta Motor Speedway track is repaved and remodeled.

Austin Dillon finished 11th as a late fill-in for Michael Annett, who was unable to drive the No. 1 Chevrolet due to a nagging leg injury. Dillon started at the back of the field. Most NASCAR Cup drivers were not at the track, but Dillon arrived early for Sunday’s race and was available for the substitute role.

One of Dillon’s first radio communications was a question asking for the name of his spotter and crew chief.

Heat forced C.J. McLaughlin to leave his 66 Toyota about halfway through the final stage.