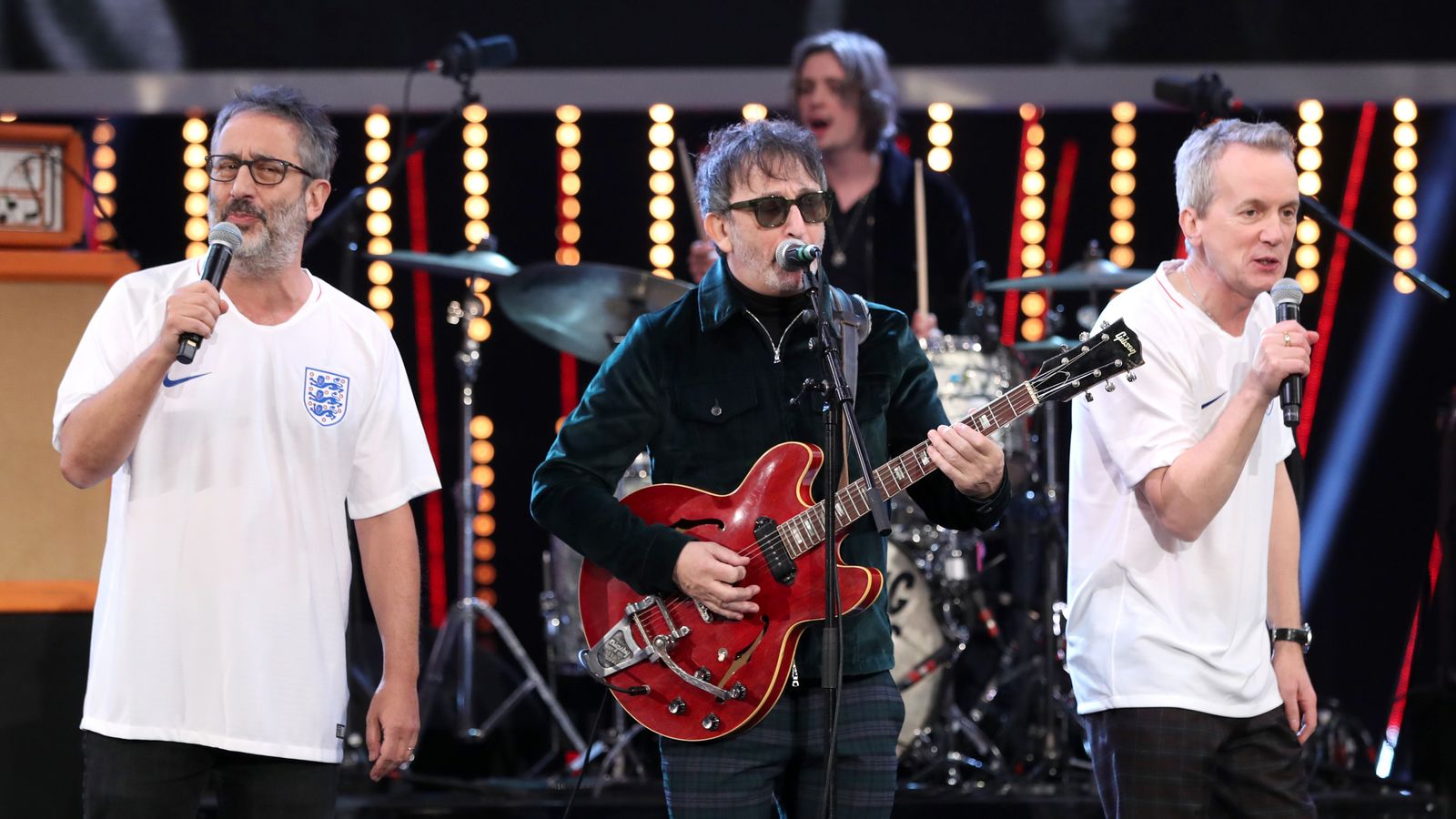 UEFA has rejected a request for Frank Skinner and David Baddiel to perform Three Lions (Football’s Coming Home) on the pitch before the Euro 2020 final.

Skinner claimed the tournament’s organisers said performing the song at Wembley before England play Italy on Sunday would be “too partisan and not fair to the Italians”.

The comedian pointed out that Italian opera star Andrea Bocelli sang Nessun Dorma at Rome’s Stadio Olimpico before Italy took on Turkey in the opening game of Euro 2020.

Skinner told Channel 4 show The Last Leg: “There was a suggestion that we sang (Three Lions) on the pitch before the final on Sunday and UEFA said it was too partisan and not fair to the Italians to have that.

“In the opening game, which was Italy versus Turkey, Andrea Bocelli sang Nessun Dorma before the game.”

In a statement to Sky News, UEFA confirmed a request for Baddiel and Skinner to perform Three Lions on the Wembley pitch was received on Friday but the closing ceremony had “already been finalised”.

“No additional elements can be integrated at this stage due to the very tight countdown schedule and operational complexities ahead of the kick-off,” a UEFA spokesperson said.

UEFA said Three Lions had been chosen as “the fan song” by the FA and it will be played during the players’ warm-up with karaoke graphics on giant screens, “as has been the case for England’s previous matches”.

Baddiel and Skinner will now perform the song with the Lightning Seeds at London’s 229 music venue in front of 200 England fans ahead of the Euros final on Sunday.

Three Lions (Football’s Coming Home) has become an anthem for England supporters since it was first released in 1996.

It is one of the UK’s best-selling singles of all time, according to the Official Charts Company, and has had four spells at number one.

It has zoomed up the charts again this week to number four as the England team seek to win their first major trophy since the famous 1966 World Cup victory.

Explaining the intended meaning of the song, Baddiel said: “It’s about how we mainly lose but still irrationally believe that this time, hope might triumph over experience.

“It’s about yearning and magical thinking. It’s about the condition of being a football fan. Admittedly people have taken (Football’s Coming Home) to mean all sorts of b******s.”

Ahead of the final, government ministers are reportedly being urged not to declare “it’s coming home” while supporting the England football team because it aggravates foreign nations.

A briefing note from the Department for Digital, Culture, Media and Sport, seen by PoliticsHome, said the phrase “does not go down well overseas” and might damage a potential UK and Ireland bid to host the 2030 World Cup.

Government sources acknowledged the e-mail and said the song would not be put front and centre of a bid to host the 2030 tournament.

But they added “the song is about us for us, it’s been a long old wait for a final”.

England manager Gareth Southgate has made an appeal to the country’s wartime spirit ahead of their Euro 2020 final, urging supporters to be proud of its achievements both on and off the pitch.

Southgate said the nation has “so much to be proud of” and urged fans to stop “looking at the negatives of our own country”.

“People have tried to invade us and we’ve had the courage to hold that back,” Southgate told The Daily Telegraph.

“You can’t hide that energy in the stadium against Germany was because of that. I never mentioned that to the players, but I know that’s part of what the story was.”