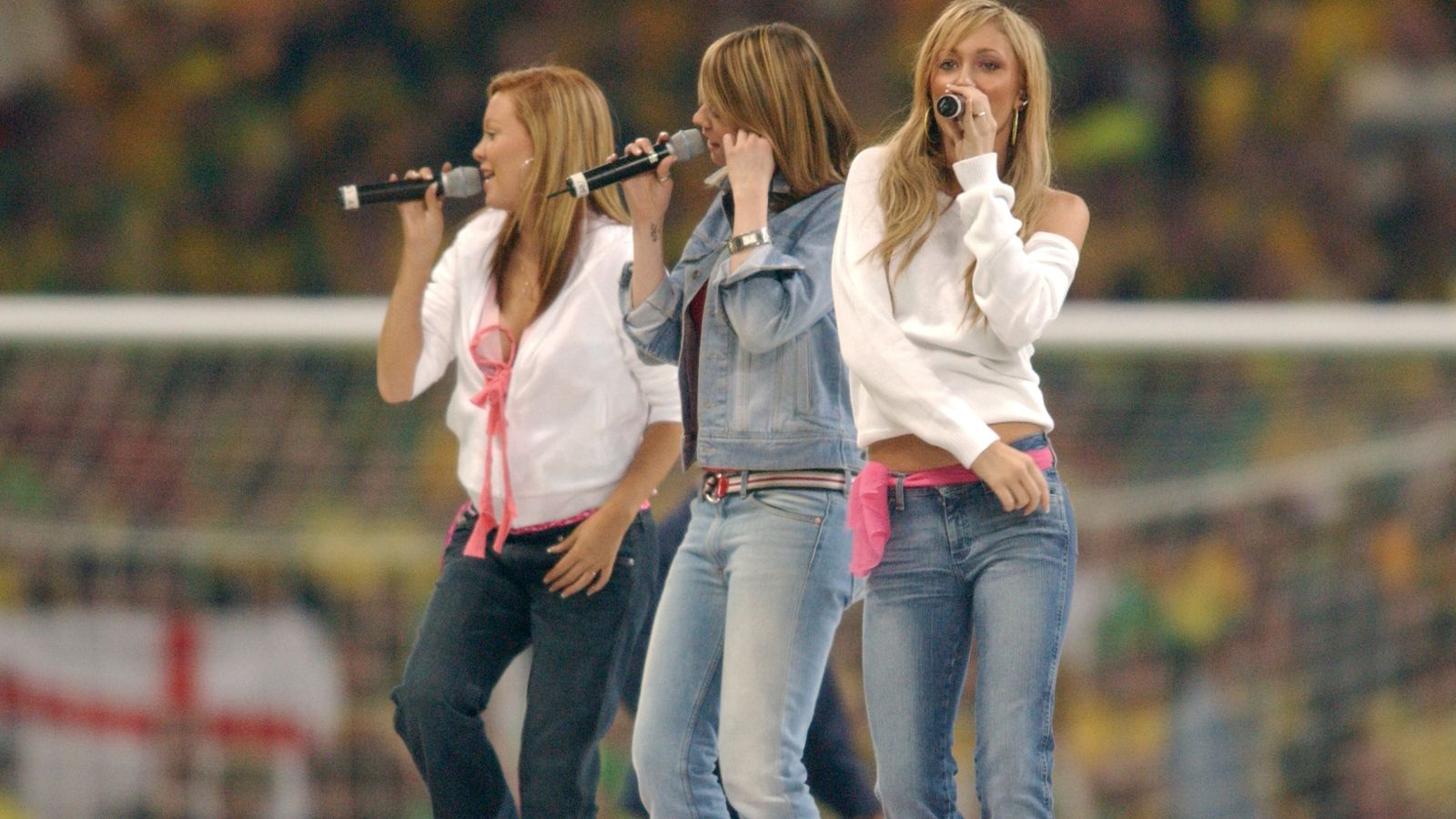 When England beat Ukraine 4-0 in their Euro 2020 quarter-final, it wasn’t just the goals, the images of manager Gareth Southgate and the praise for the players that were sweeping the internet.

Footage of Atomic Kitten’s Natasha Hamilton and Liz McClarnon performing the fan-made reworking of their 2001 hit Whole Again – now a declaration of love for the England boss/new national treasure – at Croydon’s Boxpark was also going viral, too.

While football fans refashioning pop songs into terrace chants is nothing new, this one has taken on a life of its own. In July 2021, you are probably never more than eight minutes away from hearing that football’s coming home, again.

Following the Croydon gig, phone calls were quickly made and bandmate Jenny Frost was brought back to re-record the song, which at the time of writing is currently sitting at number five in the Apple Music chart (Three Lions is number four, Vindaloo six and World In Motion just outside the top 10 at number 11).

They’ve done the obligatory England flag photo-shoot and belted out the “football’s coming home again” line to seemingly every news outlet in the country (including this one, because it’s impossible to interview Atomic Kitten now without asking them to go a cappella).

The adoption of Whole Again, the platinum-selling chart-topper that propelled the girl band to fame, actually first did the rounds during the World Cup in 2018, to a lesser extent; in 2021 it is now the unofficial soundtrack to England’s first final in an international men’s football tournament since they won it that time in 1966. Atomic Kitten are now a part of English football history. There are even rumours they will be performing at Wembley on the day itself. Keep your Nessun Dorma, Italy; we’re gonna sing about Gareth Southgate turning us on!

So, Atomic Kitten are coming home again. But is football? “Hell, yes!” says Hamilton, speaking to Sky News on Zoom. She’s joined by McClarnon, who affirms for the record that football is “definitely coming home on Sunday”. McClarnon is also on Zoom, but from a different location. Both are in car passenger seats; they’re even working during their travel time. Have they had much chance to sleep?

“It’s been absolutely chaotic,” says Hamilton. “It’s been brilliant, though. I think we did a 20-hour day the other day, so that was quite intense. We’ve been getting sleep but our working schedule has taken us right back, like, 20 years. [It’s] really intense but this is a special moment in time and this time next week it won’t be here. So we’re just making the most of it now.”

“We’re amazed by it,” says McClarnon. “Honestly… we wanted to be a part of it and we had loads of messages to say, ‘please release it, please release it’, after the Box Park video went viral, and we were just like, oh, okay… we’re all a bit shocked. We just thought we’d release it and a couple of people would buy it and it would be nice to do. It’s just a bit mad.”

Clearly, the fans have taken the song to their hearts, but Hamilton and McClarnon aren’t sure what the reaction is from the England camp. “I mean, they’ve probably heard it but I think they’re focusing on other things,” says McClarnon. “They might have something more important on their minds. I don’t know what that would be.”

Whole Again is a ballad, a song about pining for someone after a break-up. But now it has become Football’s Coming Home again, and an ode to the man in charge. “Looking back on when we first met, I cannot escape and I cannot forget,” fans now sing. “Southgate you’re the one, you still turn me on, football’s coming home again.”

This is the man who took England to the semi-finals of the World Cup in 2018, for the first time since Italia ’90, and inspired a soar in sales of waistcoats. Now he has gone one step further and is, according to a viral Twitter thread, the “ultimate middle-aged crush”.

Has Atomic Kitten’s love song struck an unlikely chord with football fans because we’re all longing for Gareth? “I don’t think there was much thought into the origins of the song,” says Hamilton. “I think it was more the fact that it was a really catchy song and it was such a successful song 20 years ago. It was number one for four weeks. It increased its sales every week over the four weeks, it was number one in 19 countries worldwide. You know, it’s a huge song. So it’s kind of in people’s minds. You only…”

“I didn’t think it would be in football fans’ minds, though,” McClarnon chimes in.

“No, but you only have to hear it once to know the melody,” says Hamilton. “It’s got that very catchy, simple melody. And it just kind of makes it the perfect song to chant along to… it just so happens that everyone’s saying that Southgate turns them on now.”

“We’re just pretending not to hear that bit every time we sing it,” laughs McClarnon.

Whole Again is undeniably a brilliant ear-worm of a pop song. According to the Official Charts, it ranks among the UK’s bestselling singles of all time with 1.03 million pure sales (CD and downloads) – making it the UK’s fourth best-selling girl band single ever behind Spice Girls’ Wannabe, 2 Become 1 and All Saints’ Never Ever.

“You know what?” says Hamilton. “I feel really proud that there is a girl band song that has crossed over to the football crowds. It’s usually really bloke-ish, most songs are male sang. So, yeah, I feel like we’re making history.”

They may be making history, but this isn’t Atomic Kitten’s first foray into the world of football. Searches on photo agency archives throw up pictures of the girls singing on the pitch at the Division 1 play-off final between Birmingham City and Norwich City in 2002, and meeting then England manager Sven-Goran Eriksson earlier that year. Coincidentally, they also performed the official England song in the 2001 Ricky Tomlinson film Mike Bassett: England manager.

“We were talking about this the other day,” says McClarnon. “I found a picture online of us and I was like, ‘that’s when we met Sven’. And you know what, we all have different memories of different things and some of us have blanked things out – not on purpose, just because there’s not much space to remember half the things that happened. And I think…”

“Why did we meet Sven?” asks Hamilton, quizzically. By the looks of things, he didn’t make much of an impact. (Sorry, Sven).

McClarnon tells her it was an “advertising thing” for a mobile phone provider. “Oh. I vaguely remember it, but…”

Maybe Southgate would be more memorable? “Yeah, he would now,” says McClarnon. “He’s the nation’s hero.”

Perhaps they can serenade him at Wembley on Sunday?

“We don’t know what we’re doing on Sunday yet, there’s a lot of conversations,” is all Hamilton will say. “Lots of offers to sing in lots of different places.”

Before they go, I ask for the obligatory sing-along, although Zoom doesn’t work too well for harmonising. “We attempted it on Zoom a while ago and it was completely out of time so I will let Tash sing the top line,” says McClarnon, before Hamilton gives the camera the famous line, followed by a cheer.

They may have sung it before, but this is the first time from a car, so an exclusive, of sorts.

Finally, before they go, their message to Southgate and the England team.

“Our message so far is that you’ve done us proud already,” says McClarnon. “Just want one little step more. But we are so grateful and proud already.”

“Super grateful, super proud,” says Hamilton. “And we’re behind you all the way.”

Football’s Coming Home Again, by Atomic Kitten, is out now