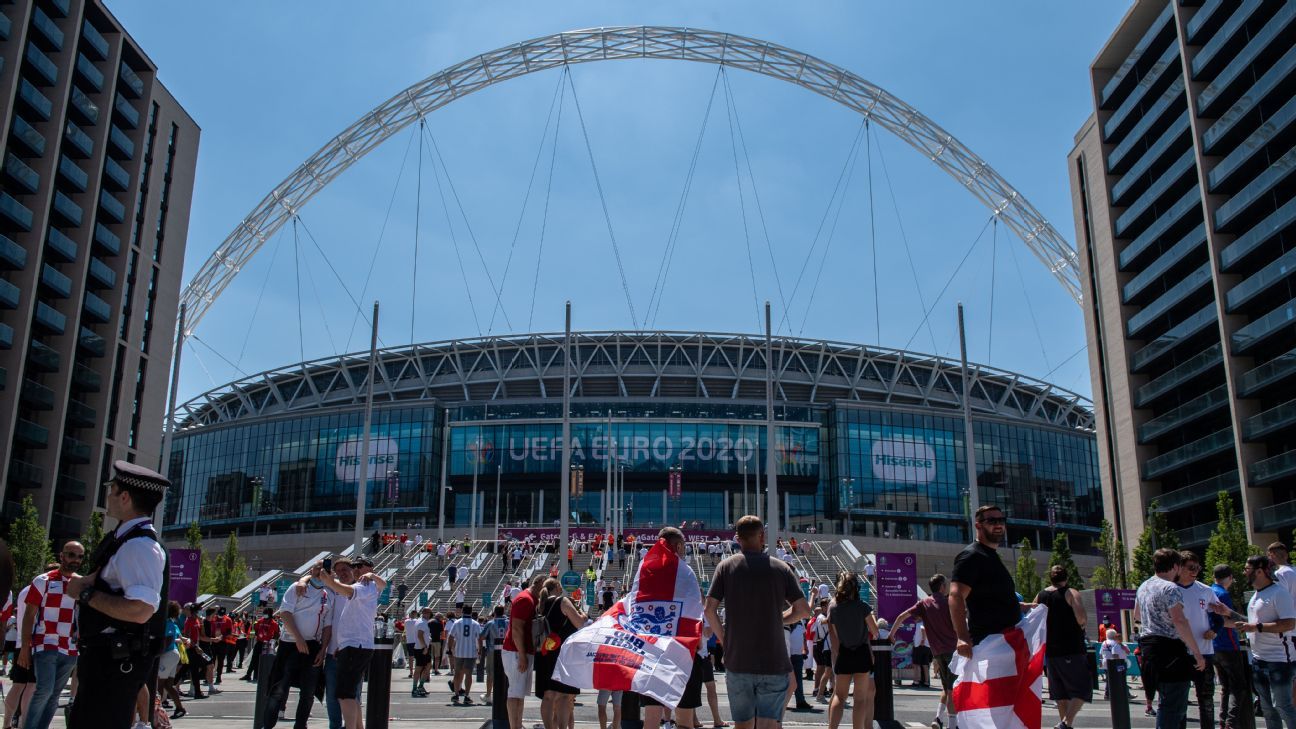 Wembley Stadium could be stripped of the Euro 2020 final and semifinals, with the fixtures moved to Hungarian capital Budapest, if the United Kingdom government fails to allow quarantine exemptions for visiting supporters and UEFA guests to attend the games, sources have told ESPN.

As first reported by The Times, UK ministers are discussing a proposal to exempt UEFA officials, VIPs and sponsors, and international broadcasters, from the requirement to quarantine for 10 days — visitors can self-release after five days with a negative COVID-19 test — on arrival in the UK.

Sources have told ESPN that UEFA have raised the issue with the UK government primarily to secure an exemption for supporters of competing teams to travel to London for the semis and the final next month.

Euro 2020, which is taking place 12 months late due to the COVID-19 pandemic, is being staged in 11 countries across Europe and the nine host cities on the European mainland have granted quarantine exemptions for citizens from other countries to attend games in their cities.

Sources have said, however, that the UK is continuing to hold firm on its border policy of insisting on a 10-day quarantine for all visitors from countries on its amber list and is reluctant to exempt UEFA officials at a time when UK citizens are subject to the same strict measures when returning from overseas.

Wembley was denied the opportunity to stage the 2021 Champions League final between Manchester City and Chelsea last month because of the government’s refusal to waive quarantine rules for up to 2,500 UEFA guests. Having taken the game away from Istanbul, Turkey, UEFA instead handed the fixture to Porto, Portugal.

While sources have said that moving the Euro 2020 final and semifinals from Wembley is still an outside possibility, UEFA remains determined to ensure that its showpiece occasion is accessible to as many supporters and guests from outside the UK as possible.

The month-long delay in the UK of the lifting of all COVID-19 restrictions from the original date of June 21 has brought the issue to a head, however, with UEFA now identifying Budapest as a potential alternative.

The Puskas Arena hosted a 60,000-capacity crowd for the Group F clash between Hungary and Portugal this week and would offer UEFA the opportunity to stage the semis and final in front of a much larger crowd than the 22,500 limit in place at Wembley, although that figure is expected to increase to 45,000 for the semis and final in London.

Hungary, a member of the European Union, is scheduled to lift all border restrictions for travel within the EU from next week, so any games in Budapest would be free from the strict regulations still in place in the UK.