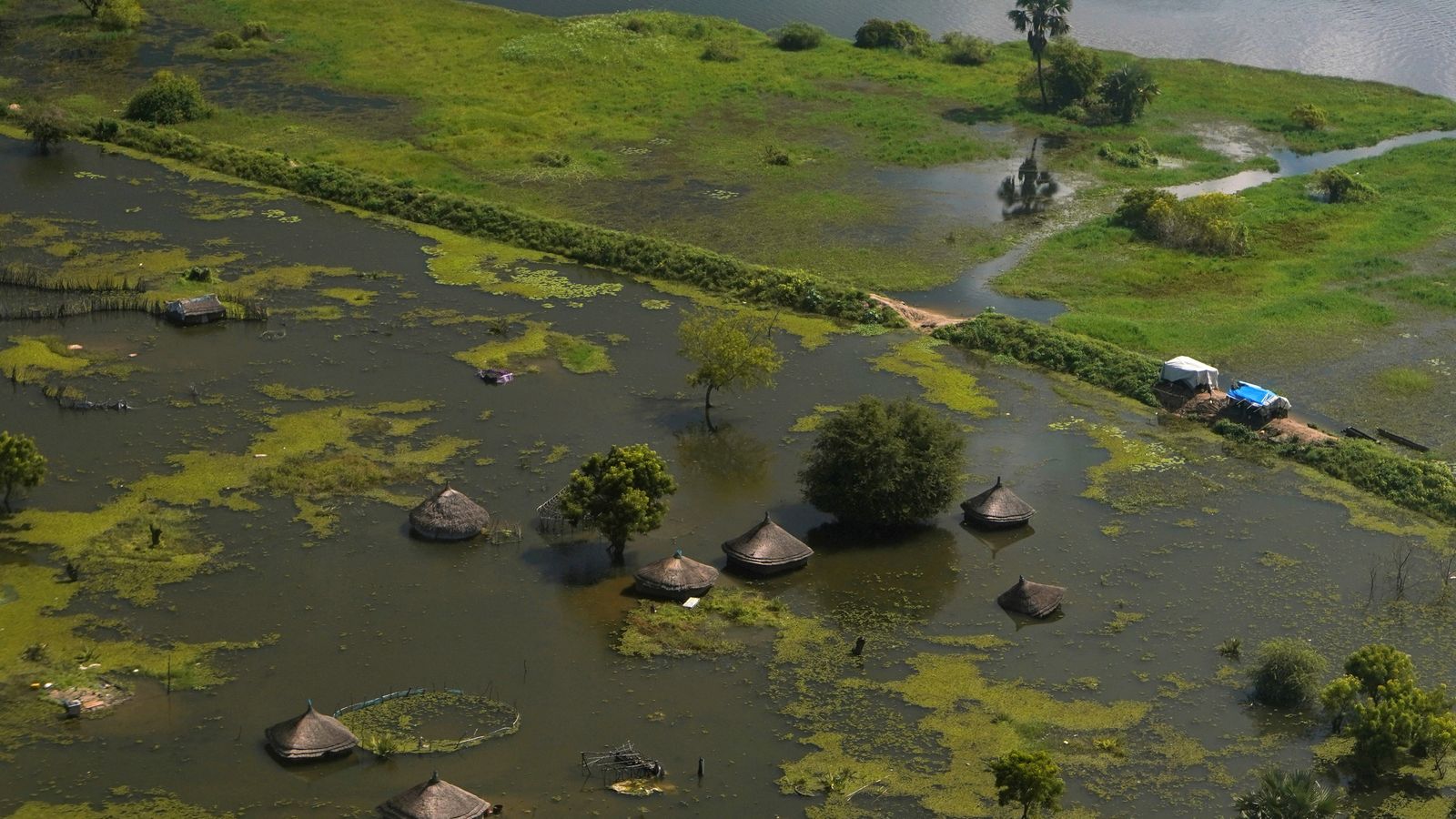 It is often said that water is a blessing in South Sudan but the people who live in this impoverished nation have been given good reason to reconsider an unquestionable truth.

Two years of unprecedented flooding has changed the way the country looks, with thousands of kilometres of rich agricultural land now lying under water.

In the counties which surround the town of Bor, in Jonglei state, some 200,000 people have been forced to seek higher ground after an island formed on their land.

In communities where residents raised cattle and grew cereals like sorghum, fish now dart through the water and large water lilies have spread themselves on the surface.

The entire ecosystem, in an area of some 1,300 square kilometres, has changed beyond recognition.

The neatly constructed roofs of numerous towns and villages are visible above the water line but there is no sign – or sound – of life from within. The highways and byways have been washed away.

We hitched a lift to Bor on a helicopter with the UN’s World Food Programme (WFP), which is now supporting 2.6 million people in South Sudan with emergency food aid.

But there is no way to move beyond Bor and into the floodlands in a conventional vehicle.

Instead, the WFP uses amphibious craft called “sherps”, and Sky News was given a couple of seats in the back of one of these contraptions on a mission to save an ageing dyke.

The floodwaters overwhelming the counties of Jonglei state stem from two separate sources.

Much of the water has flowed from Lake Victoria – at the head of the Nile river system – some 800 kilometres to the north.

Unprecedented rainfall has been flowing into the lake since summer 2019.

The Ugandans, who control the dam at the top of the Nile, have been releasing water to prevent what is known as “backflow” from destroying communities on the lake itself.

As a result, the White Nile has burst its banks to devastating effect in South Sudan.

Now, this year’s monsoon is scheduled to start. The cumulative effect of both events has resulted in fundamental environmental change.

The UN is trying to restore an aging dyke in the vicinity of Bor.

It would allow tens of thousands of people to return to the land, but the earthworks have been destroyed in more than 40 places by the flooding.

We watched small groups of men lug 80kg bags of sand and mud into position in just one of these sizable gaps.

There are 1,500 working on the dyke and all are men who used to farm in the area. Now they live in displacement camps in surrounding towns and villages and everyone here dreams of returning to the land.

“We need to protect our territory – this is our territory and the water is beyond our control,” said a young man called Mangol Guy Peter.

“God has taken but he will also provide.”

But the state minister for housing in Jonglei, Elijah Mabior Bol, is less certain about God’s role. He suspects his nation will bear the brunt of decisions made by human beings in far flung places.

“It is when you have given up of thinking, scientifically, that’s why you say it is God,” he said.

The people who grew cereals and raised animals in this region have gone. Those who remain must fish or grind flowers of water lilies into small amounts of cereal.

It is a difficult new world and they are trying to adapt.