Anthony Ramos is perhaps best known in the UK as John Laurens and Philip Hamilton in the stage musical Hamilton.

But now, he has ditched the muskets and 19th-century army uniforms for a flat cap and a vest, as he leads the ensemble cast in the Lin-Manuel Miranda musical In The Heights, which has just burst on to big screens in the UK.

It tells the story of Washington Heights in New York – a community which is predominantly made up of Latino people and immigrants, and highlights the highs and lows, of living there. In The Heights star Anthony Ramos on his role

And while the community and its residents are put centre stage, so is the singing, dancing and rapping in this colourful and loud musical.

Ramos plays Usnavi, the lead character in the film, who ties everyone’s storylines together, telling Sky News he sees the role as the “invisible thread” of the film.

“Usnavi is a guy that… cares about his community, he runs a corner store in a predominantly Latino community.

“He takes care of his cousin, he takes care of, she’s not really his grandmother, but she’s the matriarch of the block, if you will, and of the community. He takes care of her, and both his parents passed away and he inherited a business that he didn’t ask for, but he does it with as much grace as possible.

“And Usnavi, he tells this story about this community and the day-to-day life that not only he goes through, but the people in the community.

“He’s like that guy that knows who’s dating who, what person moved out of that apartment, who just moved into that business, you know?

“And Usnavi kind of walks us through what is happening in this world, he’s like the perfect invisible thread, if you will, for this for this kind of film with this many characters.”

Usnavi’s storyline is bittersweet – he loves his community and works hard for them, but he also dreams of going back to his home country of Dominican Republic and starting a beach bar with his cousin.

Talking about a story that is relatable to people who dream of a more peaceful life, Ramos says: “He wants to build it back up and give not only himself an easier life, but his family, and live in paradise – but times are hard in New York.

“He’s still trucking through and he’s still doing his best every single day. And I think ‘who hasn’t gone through that’, where you have days with some good, some not so good.”

Ramos tells Sky News that the film’s relevance in society is part of the “beauty of art”.

And of course this is not the first time that Ramos has worked with the film’s writer Lin-Manuel Miranda, having previously worked with Hollywood’s most in-demand man on Hamilton – which last year was beamed into millions of living rooms on Disney+. 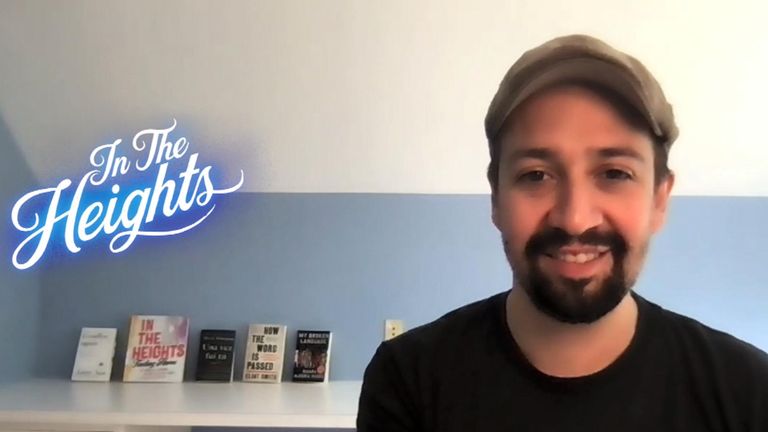 “Lin’s a genius,” he gushes to Sky News.

“I’m always nervous – any time I’m around him I’m soaking up something, I’m learning something from him.

“He’s just one of the most brilliant people to ever walk the earth. I think Lin is a visionary.

“So any time I can work with him, I’m grateful because I’m always learning from him all the time.”

In The Heights starring Anthony Ramos is out in cinemas across the UK now and you can hear more on the Sky News Backstage podcast, available wherever you get your podcast.

No 10 insists UK economy is strong despite IMF warning it will fare worse than any other in developed world – including Russia
Avis has new T&Cs for renting its EVs, and they’re a little weird
China threatens ‘further actions’ over US downing of suspected spy balloon
Way-too-early tennis rankings and predictions for the rest of 2023
Norway’s gigantic sovereign wealth fund loses a record $164 billion, citing ‘very unusual’ year