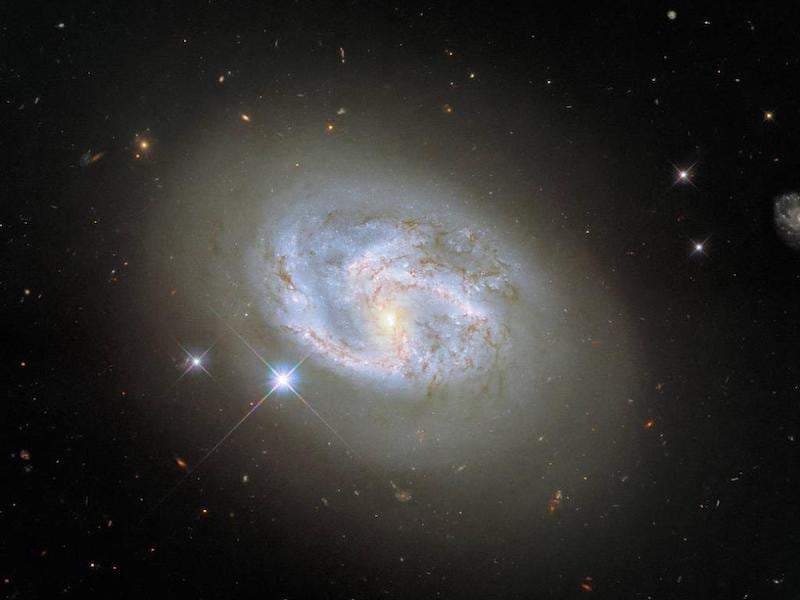 NASA has shared a fascinating photograph featuring three different galaxies. And with that, the space agency has also explained how these galaxies don’t let any “labels define them”. Confused? Let’s unpack. On June 13, NASA posted a photograph of three galaxies — one right in the centre and the other two spotted on the extreme right and bottom of the picture. The photo was captured by the wide-field camera 3 of NASA’s Hubble telescope. Now, let’s understand what makes these galaxies unique. In its Instagram post, the agency said that the galaxy pictured in the middle was “difficult to classify” and the reasons are very interesting.

But here’s a simpler way of looking at it. NASA says the galaxies grow just as we do. “While the spiral arms of this galaxy are distinguishable, they’re not clearly defined. Pictured here, the tip of one arm appears to be diffused,” it says.

Galaxies are not static, and their morphologies (and therefore their classifications) vary throughout their lifetimes, says NASA in a separate note published on its website.

“Spiral galaxies are thought to evolve into elliptical. This can happen by merging with one another, causing them to lose their distinctive spiral structure,” NASA says further in its Instagram post, explaining how even the galaxies change their composition with time.

The agency says that the spiral galaxy NGC 4680 in the middle is flanked by two other galaxies as we explained above. Interestingly, NGC 4680 enjoyed a wave of attention in 1997, playing host to a supernova explosion known as SN 1997bp, says NASA.

NASA shared the same picture on Twitter as well and a user wondered if the space agency ever flirted with the idea of sending its astronauts to one of these galaxies.

Have NASA ever thought about sending spacecraft to these galaxies to see if there is life. I think every galaxies that Hubble take pictures of should have a probe or unmanned spacecraft sent to it.. so we can find out what going on.

Another user, though, explained why it was nearly impossible for NASA to undertake any such mission.

Way too far away. We cant even travel at the speed of light, (to current knowledge is impossible), and that would still take billions of years. Until we discover how to manipulate space time and utilise worm holes, it can’t happen.

Here are some more Twitter reactions to the picture:

NASA team, excellent capture of three galaxies And impressive. I hope in the future we are going to Be able to observe in more detail. Professor Isagholian, astronomy, physics

My God, this galaxy is changing. Notice the change in direction of the star’s light in the center of the galaxy.

Imagine the possibilities of the existence of alien life in one of those galaxies, and the potential that there’s a life form more comical than Carot Top.

Wow! So magnificent! How I wish to be in one of those galaxies….

Thank you for sharing this amazing photograph. What a sight this is. How fortunate that we are able to see this, to appreciate and benefit from the view . Remember everyone involved. The many people collaborating, the technology attained, to capture this moment in time. Wow!

The Hubble telescope, which captured the picture, was launched in 1990 as a collaboration project between NASA and the European Space Agency. The telescope has an unobstructed view of the universe.

Microsoft’s $69bn takeover of Activision a step closer to being blocked by UK watchdog
Westminster’s ‘nepo babies’ are here to stay – whether we like it or not | Adam Boulton
Ranking college football’s best transfer classes: The top 10 for 2023
Princess Diana’s marriage to Charles was ‘essentially arranged’, says Jemima Khan
Tesla Model 3 refresh prototype spotted being tested