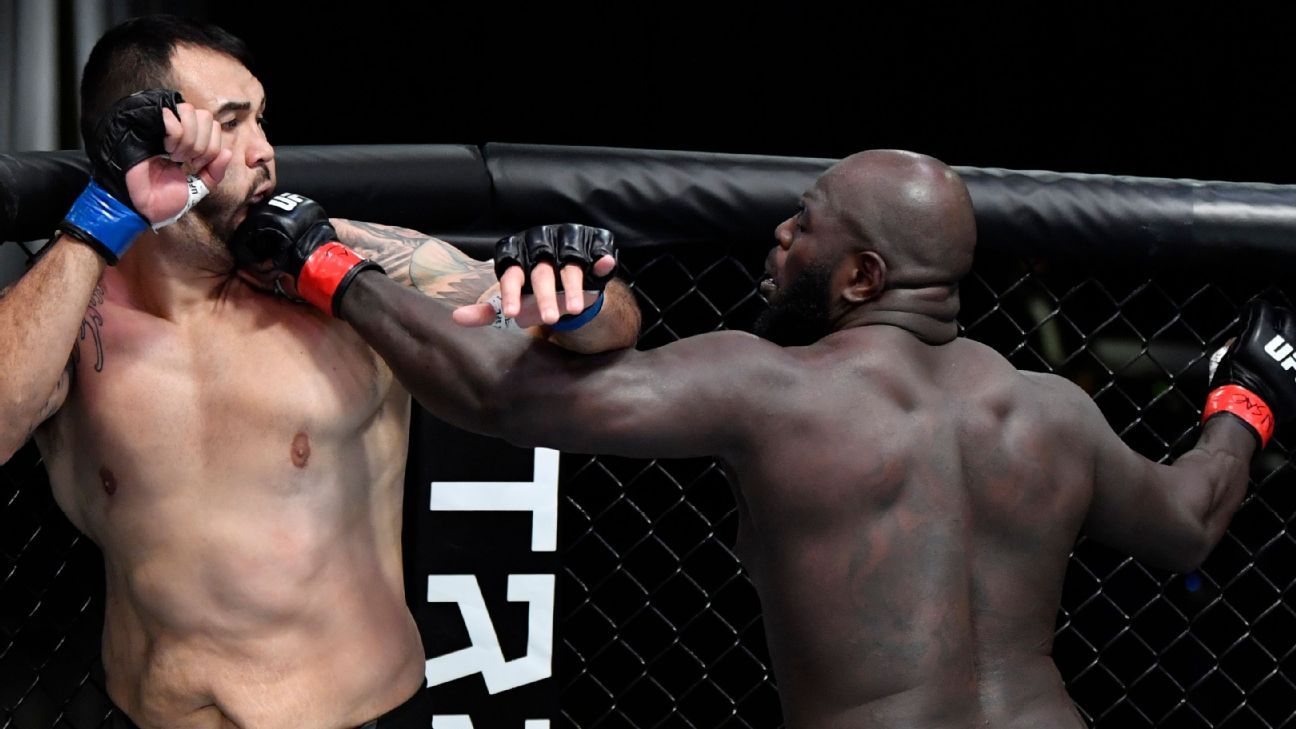 Jairzinho Rozenstruik has a knack for getting finishes right before the bell.

Less than two years after he earned the latest finish in UFC heavyweight history, Rozenstruik uncorked another buzzer beater Saturday. The kickboxing standout stopped Augusto Sakai via TKO with punches at 4:59 of the first round in the main event of UFC Fight Night.

Rozenstruik pressured Sakai against the cage with the first coming to an end. Sakai attempted to circle off to his right, but Rozenstruik caught him with a stunning left hook and then a right hand behind the ear. Sakai dropped to the canvas and Rozenstruik swarmed with big punches until referee Herb Dean stopped the action right before Sakai could be saved by the horn.

In December 2019, Rozenstruik finished Alistair Overeem via TKO at 4:56 of the fifth and final round, the deepest a UFC heavyweight bout that ended in finish has ever gone.

ESPN has Rozenstruik ranked No. 7 in the world at heavyweight. He was coming off a loss, so this gets him back on track — and right back into title contention.

“Anybody that’s ranked above me makes sense,” Rozenstruik said when asked who he wants to fight next. “There’s the top five there. I’m coming for you guys. I’m coming.”

Rozenstruik (12-2) has now won two of his last three bouts. The Suriname native struggled to pull the trigger in a unanimous decision loss to Cyril Gane in February. Rozenstruik wanted to return as quickly as he could to remove the bad taste from his mouth from that loss.

Following a quick knockout loss to top contender Francis Ngannou in May 2020, Rozenstruik did bounce back with a TKO of former heavyweight champion Junior dos Santos last August. And now he has bounced back from the Gane bout. Rozenstruik, 33, has several kickboxing titles to his name and is now seeking MMA gold in the future.

Sakai (15-3-1) has been one of the most underrated fighters in the UFC heavyweight division. The Brazil native won four straight in the UFC before falling to legend Alistair Overeem by fifth-round TKO last December. He has now dropped two straight. Sakai, 30, has just those two losses in his last eight fights.

Decision to develop a ‘Britcoin’ digital pound to be made by 2025
Avis has new T&Cs for renting its EVs, and they’re a little weird
Affirm cuts 19% of workforce; shares tank on earnings miss
Electric truck maker Rivian confirms it is developing an electric bike
Business secretary tells Ofgem to toughen up over handling of prepayment meter scandal