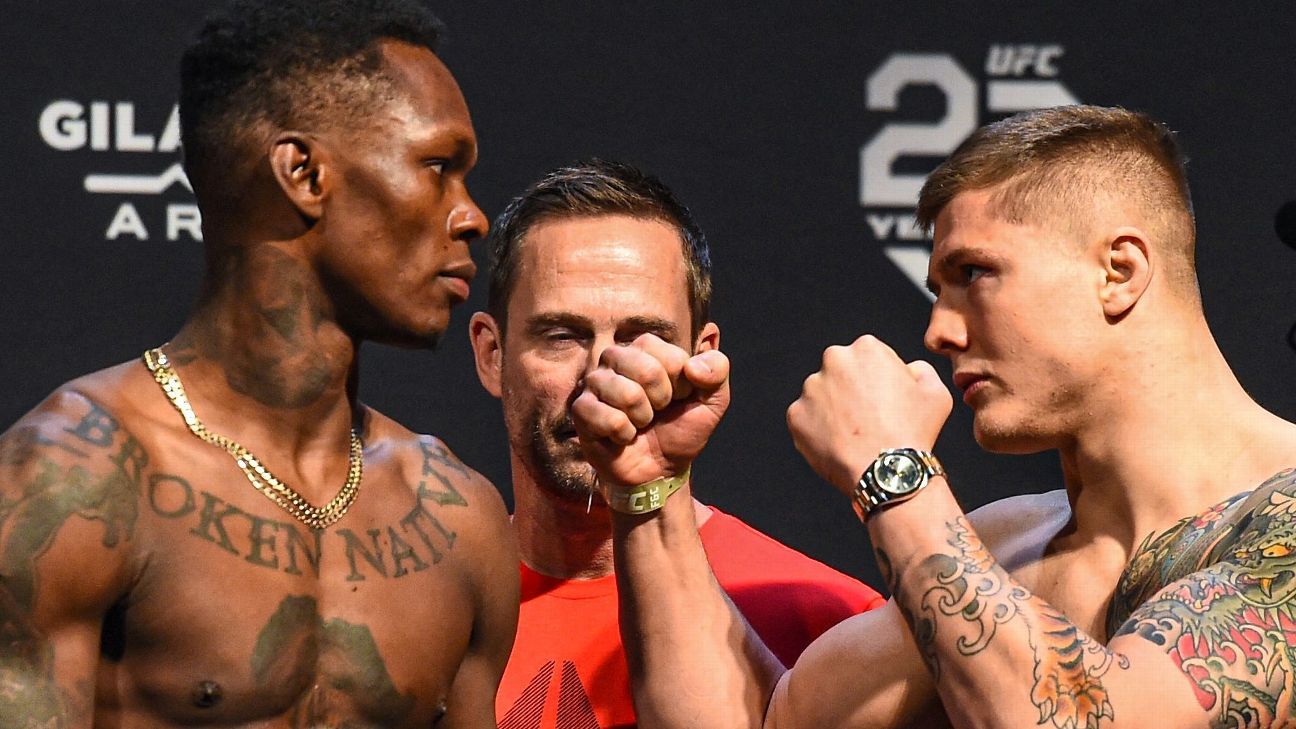 It is a rematch of a non-title bout that took place in April 2018, coincidentally, in Glendale. Adesanya (20-1) defeated Vettori (17-3-1) via split decision in a three-round fight in which Adesanya had his way on the feet, but Vettori staged a late comeback behind his ground game.

Former middleweight champion Chris Weidman didn’t watch that fight live, but he remembers the feedback he received from those who did.

Two title fights between familiar foes headline UFC 263. Israel Adesanya defends his middleweight title against Marvin Vettori, whom he defeated by split decision in April 2018. Deiveson Figueiredo and Brandon Moreno battle for the flyweight championship for the second time after fighting to a draw in December.

“There was a lot of clout behind Adesanya, everyone thought he was really good,” Weidman told ESPN. “But then I remember it getting back to me that some Italian guy who wasn’t a wrestler was outwrestling him.”

Ahead of this weekend’s championship rematch, Weidman took a closer look at that first meeting. Weidman says there is plenty to take away from it, even three years later.

“It’s really going to come down to strategy, what they bring to the table and what they learned from the first fight,” Weidman said.

Here are his keys to the fight, as told to ESPN.

If you watch Vettori in the first fight, he got to a clinch position in the first round, which is perfect. He got his hands locked. If you do that, it should be a takedown every time — but he was clueless there. He kept trying to do an inside trip, like three or four times, and it was awful. You can’t get an inside trip on anybody the way he was doing it. You really have to bring your body to one side and commit to it.

I hope he worked on his clinch offense, but that’s just not who he is. Vettori is not a wrestler, and it takes a different kind of cardio to do that for five rounds. He’s more of a striker, so he’s really going to have to change his style.

At the same time, the single leg he shot into a double in the third round — he didn’t even have his hands clasped properly and he was able to pull Adesanya down. Which … just tells me Israel is not that strong. Vettori wouldn’t be able to pull a normal guy’s leg, with poor technique, the way he did in that fight, but that’s something Vettori felt leaving that cage. The grappling exchanges in the first fight had a lot to do with strength. Adesanya is a weak guy for the weight class. He’s smaller and skinny — which is why he has great cardio and great range — but if you grab him, he’s not that strong. Vettori definitely knows Israel is not the strongest dude. He had a couple takedown attempts that were just awful, but I think that’s because it’s foreign to him. If he can just improve his technique, he’ll have an easier time this time around.

Adesanya’s feints are so important. If he’s able to land some big punches in that first round, he’ll probably be able to win this fight on feints alone the rest of the way. He’ll start baiting Vettori with feints and then land the big stuff — he could really pick him apart. Honestly, his feints are probably his best weapon.

I really don’t think there’s anybody better than Adesanya at feints, distance control and creating the dance he wants. Having people overreact and underreact. In the first fight, he made Vettori overreact with feints, and then underreact when … actually throwing — just by feinting. Make him worry about what he’s doing next.

This is the fight Adesanya needs to be fighting. When he does this, he is so tough to close the distance on because there are so many weapons you have to worry about. You can see Vettori getting frustrated, stuck throwing one punch at a time.

No. 3: Adesanya’s problems off his back?

It looks like Adesanya has almost two different lines of strategy that he’s struggling with. One is that you take your time, you conserve energy, don’t rush to get back to your feet — because in that process, a lot of mistakes can be made and your opponent can capitalize. The other train of thought is nonstop moving on your back. If the other guy is better than you on the ground, you keep moving, looking for a way back to your feet.

In the first fight, Adesanya looked like he was stuck between the two strategies and never really chose one. There have been amazing strikers who will literally just hold position on the bottom. Anderson Silva had an amazing career as someone who wasn’t the biggest [and] strongest [or the] best grappler, but if you spent the energy to take him down, he would just relax, stay calm and wait for the referee to stand you up and … [be] less tired than you are, or wait for the next round.

Adesanya has either option available to him, but in this fight I think the way to get off his back is to create frames, get his back against the cage and get back to his feet. Actually put himself in harm’s way, because Vettori isn’t the guy I’m worried about taking my back and choking me out. I wouldn’t mind Adesanya getting an underhook and even giving up his back to get to his feet, because I don’t think there’s much danger there. If you’re fighting a skilled jiu-jitsu practitioner like Demian Maia, you don’t do that. So, it depends on the guy you’re fighting. In this fight, he has to do a better job of getting to his feet and creating a scramble.

No. 4: Vettori ‘bringing his feet with him’

One of the things Vettori struggled with in the first and second rounds is that he didn’t bring his feet with him after the left hand. He throws the left hand, the feet stay behind and Adesanya, being the longer guy, is able to reach him. It’s wasted movement and it puts Vettori in trouble, where he can be countered.

Now, going into the third round, his coaches must have said something to him because he’s a whole new guy. He’s walking forward with his feet underneath him the whole time. He’s throwing the left cross and the right jab comes right after. He’s dangerous with the right hook now. You can see this is making Adesanya uncomfortable. He’s backing up. He’s getting sloppy. He’s starting to throw strikes he wasn’t throwing before. This is the kind of fight Vettori can win.

Can Vettori stay relaxed while bringing that constant pressure? And even when he does, it gives him more options to win the fight, but it also makes Adesanya way more diverse and dangerous because of his counter strikes. It’s almost like Vettori has to put himself into the fire to win. And I’m going to say, Adesanya saw that Vettori didn’t always bring his feet with him, and when that happens, he doesn’t have much power. Adesanya was unfazed by Vettori’s punching power, and I think that will allow Adesanya to open up and become his best self quicker in the fight, as there will be less of a feeling out process.

Prediction: When I watch the first fight and think about this second one, I don’t think either guy has changed too much. When Adesanya is at his best on his feet, he is something to watch. I think the odds are stacked in his favor. I just don’t think Vettori has it in him to pressure and make it sloppy for five rounds without exhausting himself and eventually being put in a position he doesn’t want to be in, getting clipped and put out. He’s a tough dude, but he hasn’t been conditioned to wrestle a guy like Adesanya for five rounds, so I’m picking Adesanya.

Norway’s fossil fuel bonanza stokes impassioned debate about how best to spend its ‘war profits’
What is Scorpion, the now disbanded police unit at the centre of Tyre Nichols’ death?
British teenage extremist whose videos were linked to two mass murders in US jailed
Man dies after being shot by dog
Biden rules out giving F-16 fighter jets to Ukraine