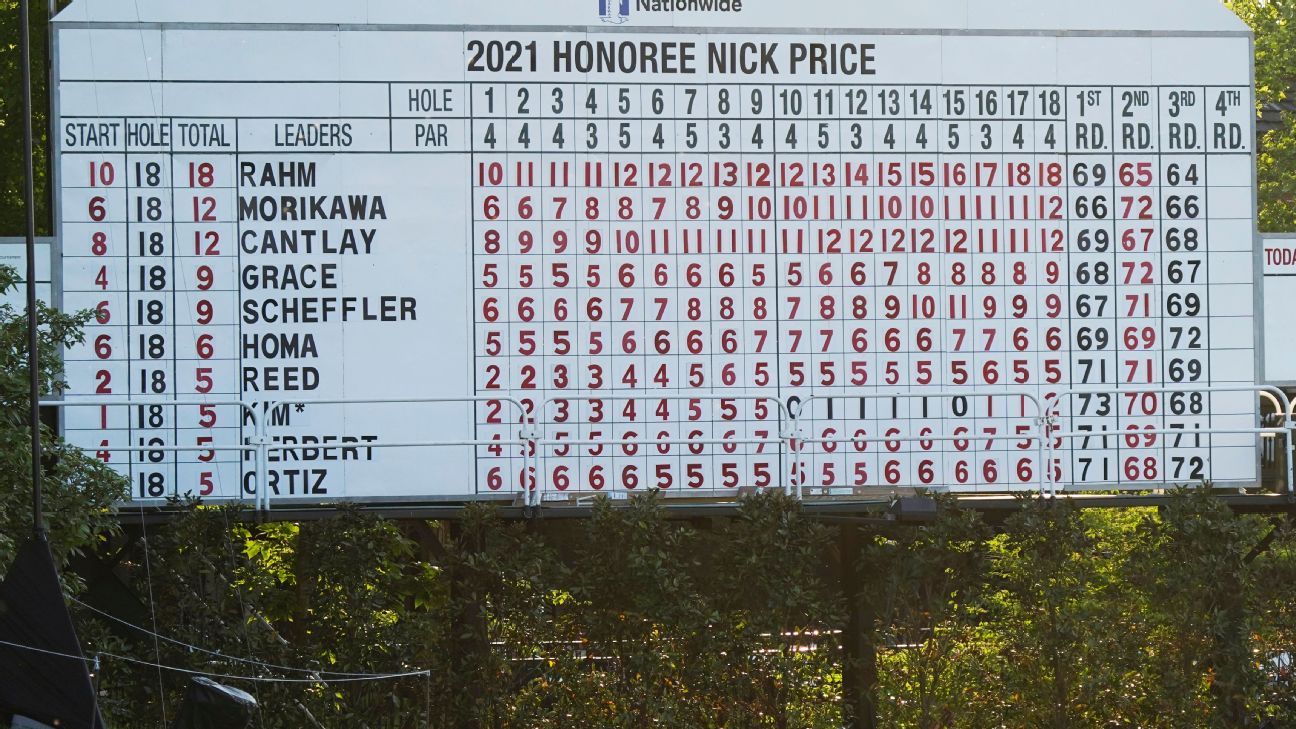 DUBLIN, Ohio — As golf attempts to get back to normal, you would have been hard-pressed to think things were not as they always were Sunday at Muirfield Village Golf Club for the final round of the Memorial Tournament.

Jack Nicklaus, tournament founder, host and 18-time major champion, took up his usual spot in the CBS-TV broadcast tower. He was there beside the 18th green to greet winner Patrick Cantlay, who outlasted Collin Morikawa in playoff. A robust crowd stood near the 18th green.

And those on hand and watching on TV could appreciated the drama, as Cantlay, Morikawa and Scottie Scheffler staged a daylong battle over Nicklaus’ course. A tournament so close it needed extra holes.

Of course, almost all were aware such a scenario played out only because Jon Rahm was in isolation somewhere after testing positive for COVID-19 on Saturday. It might not have dampened their enthusiasm, but it was nearly impossible to ignore.

Had Rahm been able to play Sunday, he would have needed only a 4-over-par 76 to win by a one shot. He led by six strokes and was 18 under before his world was turned upside down. The playoff participants ended 72 holes at 13 under. It was hard to envision anyone getting close to where Rahm stood after Saturday.

But Rahm had sit by like everyone else on Sunday, the shocking development hovering over the tournament like the rain clouds that added one more bit of intrigue as play was winding down.

“Such a weird situation and so unfortunate,” Cantlay said. “Because, me included, everyone knows it would have been a totally different day had that not happened. But there’s nothing I could do about it. I just tried as hard as I could to reset and get focused.”

Cantlay and Morikawa each shot 71. Cantlay won when Morikawa bogeyed the first playoff hole. Rahm could only watch — that is, even if he could bear to tune in.

Rahm shot 8-under-par 64 on Saturday, after having shot a 65 that included a hole-in-one at the conclusion of the second round earlier in the day. He looked dominant and seemed destined for a sixth PGA Tour victory and to inch closer to No. 1 Dustin Johnson in the Official World Golf Ranking.

It got wiped out due to the positive COVID-19 test.

For the past year, players have gone through numerous protocols and procedures in order to play professional golf. In April, the PGA Tour said it would allow players to forgo COVID-19 testing if they were completely vaccinated. Never had this happened, a tournament leader getting knocked out of the event.

Rahm was part of the PGA Tour’s contact-tracing protocols because he had been around someone who tested positive. That meant he needed to test every day. His tests on Monday through Friday came up negative. His test on Saturday came back positive. He had to be immediately removed from the tournament.

Three other times over the past year a player was removed from a tournament after having tested positive once the competition began: Nick Watney at the RBC Heritage last June, Denny McCarthy at the Travelers Championship and Branden Grace at the Barracuda Championship. Grace’s situation was similar to Rahm in that he was in contention.

But Grace didn’t have the lead, as Rahm did. Also, that event wasn’t nearly as prominent as the Memorial.

“I think we have all been really scared and we have all thought of this what-if scenario,” Morikawa said. “But that’s the thing with what-ifs. We can only think about it and think what we’re going to try and do, do that until it actually happens; and it’s very unfortunate for him to have a 6-shot lead and it’s kind of in his possession right there.

Morikawa made it clear that he was disappointed Rahm was getting a hard time over his vaccination status.

Rahm this past week received a COVID-19 vaccine. But prior to doing so, he had been in contact with someone who tested positive, hence he was required to go through the Tour’s protocols.

Jon Rahm has had to withdraw from the Memorial Tournament after testing positive for COVID-19.

Rahm had tied the tournament records for lowest score thru 54 holes (198) and largest lead thru 54 holes (6 strokes) prior to his withdrawal. pic.twitter.com/n3qHJ0k4qO

That meant no access to the clubhouse, locker room or player dining. Although his status was not announced publicly, Rahm made it apparent to those he was with in the pro-am, playing partners and anyone he came in contact with of his status.

Golf has not missed a scheduled event since returning a year ago this week. There have been positive COVID-19 cases, to be sure, just like there have been in other sports, in all walks of life.

But there have been no major outbreaks, no huge spikes at any tournament. There was a bit of a scare in April when four players tested positive the same week after the tournament in New Orleans, but that turned out to be about the worst of it.

The PGA Tour made it to this point with no huge headlines — until Rahm.

He took the high road in the statement he released via Twitter, saying, “These things happen in life.” And undoubtedly, losing nearly $1.7 million in prize money — the take for winning — had to sting. But there was more: another victory and the momentum as he went into the U.S. Open at Torrey Pines, seeking his first major title. Had Rahm won the Memorial, he’d have gone to San Diego a big favorite.

The 30 key moments in Gary Bettman’s 30 years in the NHL
The DOJ’s antitrust case against Google is ambitious but risky
Shapps tells British Steel owner redundancy plans are “unhelpful”
Girl, 15, dies and boy, 16, in hospital after stabbing – as teen arrested for murder
Google is asking employees to test potential ChatGPT competitors, including a chatbot called ‘Apprentice Bard’