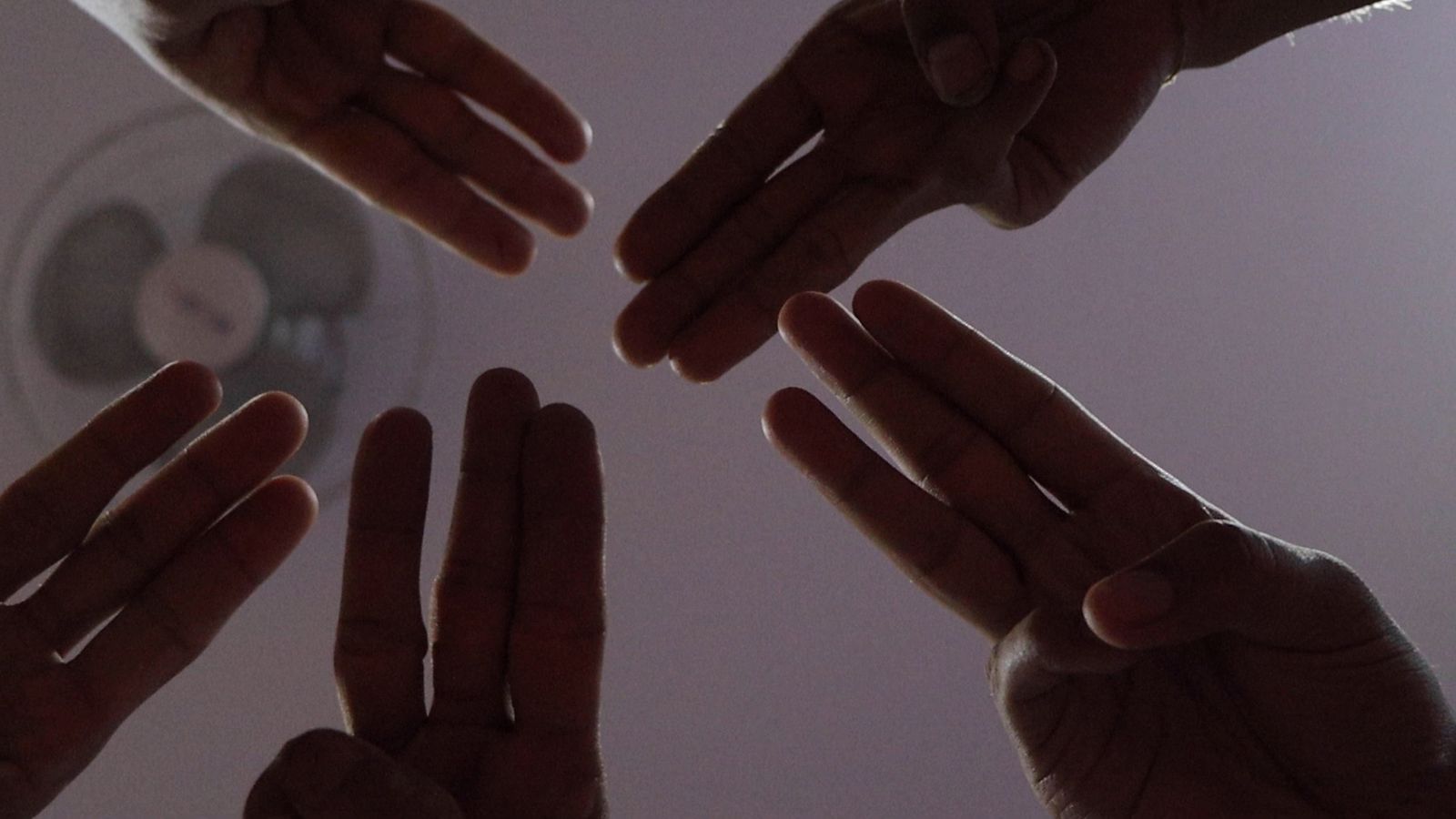 In a safe house in Myanmar, resistance is growing.

Quietly, in the gloomy light, a group of men raise their hands in a three-finger salute.

Traditionally a sign of defiance and support for pro-democracy protesters, for these men it symbolises so much more.

Once police or soldiers, they now plan to fight the forces they used to serve.

Just talking to us is a huge risk; if caught the defectors could be killed.

So in hiding, faces and voices disguised for protection, they explain why they decided to defy the junta.

“We were told that we could shoot the protesters if they gathered in more than five. We could arrest them and shoot them,” Officer A, a former police officer says.

“We were ordered to shoot but we couldn’t do it.”

The allegation echoes the claims of both protesters and human rights groups after February’s military coup.

Myanmar’s security forces have been accused by Amnesty International of “premeditated” attacks on peaceful protesters – including “extrajudicial executions” and indiscriminately spraying bullets in urban areas.

While a shoot-to-kill policy has never been officially confirmed by the junta, the defectors claim they were encouraged to open fire.

“My friends said if they shot the protesters, they would get a promotion as a reward and be praised for being brave and following the junta’s order,” another former police officer, Officer B, tells Sky News.

“They were promoted from police second lieutenant to police lieutenant, from corporal to sergeant. As far as I know, those who shot the protesters got promoted.”

A former soldier in the group tells a similar story.

According to him, challenging an order wasn’t an option.

“The soldiers and police are now abusing the people at the order of Min Aung Hlaing (Myanmar’s junta chief),” he says.

“‘Shoot. Just shoot. This is my order,’ this is how they order the troops. If we did not follow the order, we would be punished.”

As well as the shootings, the military is accused of other abuses: of power, of people, and of their duty to protect.

Some female protesters have publicly accused members of the security forces of physical and sexual violence following their arrests.

He says he heard reports of sex assaults during his service, in particular during military operations to ethnic minority areas in Myanmar.

“People are calling soldiers ‘military dogs’ [and] also accusing them of rape. Let me tell you, yes, we have seen those scenes at the frontline. I wasn’t involved in it.

“The officers were calling the women here and there and abusing them. Rape as well. It’s happening,” he says,

At least 840 people have been killed since the coup, many shot by junta forces according to figures from the Assistance Association for Political Prisoners (Burma).

We put the allegations made by the defectors to the junta, but on publication Sky News still hadn’t received a response.

The men say the command to use violence against civilians is the reason they fled and joined the protest movement.

Their choice means the institutions they swore an oath to are the enemy they must defeat and the decision to defect has come at great personal sacrifice.

They have lost their freedom. They cannot see their families. They cannot return to their hometowns or tell friends where they are.

They now live their lives in hiding and on the run, waiting in dark, cramped and basic accommodation fearing they may be discovered.

Yet still they remain defiant – determined to fight for the democracy lost when the military seized power.

Since the coup, some protesters have travelled to border areas in Myanmar for resistance training and now some of the defectors are planning to use their own skills to help them.

“Those [protesters] who are not familiar with the military training, they need to learn how to use the weapons, to fix them, and set them up.

“I want to teach them. I will join with those organisations that are in the revolution to fight the junta.

“I will fight those power-hungry thugs,” the soldier says.

“I will join this revolution until the end. I will give my life. I will kill them wherever I see them.”

So in secret they plan, they train, they get strong; preparing to strike back against the generals they followed for so long.

More than 13,000 Nigerian residents take Shell to court over oil spills
BMW in talks with UK government over £75m grant for electric Mini
Nissan unveils convertible EV concept, a category it should’ve been producing a decade ago
Three emergency workers fired over response to Tyre Nichols after he was beaten by police
Apple sales drop 5% in largest quarterly revenue decline since 2016